About Slingo Britain's Got Talent

In Britain's Got Talent Slingo, the original and world's biggest talent show meets the ever-popular game genre Slingo! Could you impress the judges and win the crown and the top jackpot? You'll have to play the game to find out!

The Britain's Got Talent Slingo is a traditional Slingo game with a showbiz twist!

The Union Flag has been added to the conventional Slingo reels, and the Joker and Super Joker appear to have a glint of show business in their eyes.

How To Play Slingo Britain's Got Talent 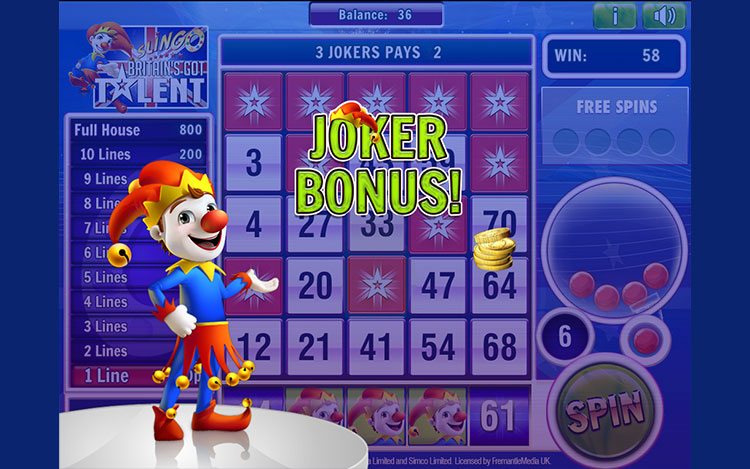 To begin playing Britain's Got Talent Slingo game, you must first purchase a ticket.

The price of your ticket will vary based on how much money you choose to bet.

Use the + and - buttons to customise this, then pay your ticket, press 'start game,' and follow these steps:

When playing the Slingo Britain’s Got Talent online Slingo game you’ll notice that the symbols used are all traditional Slingo symbols. While it would have been nice to see a bit of customization here, if you’re familiar with the OG symbols you won’t find it too hard to get to grips with this title. The symbols used in this game are as follows: 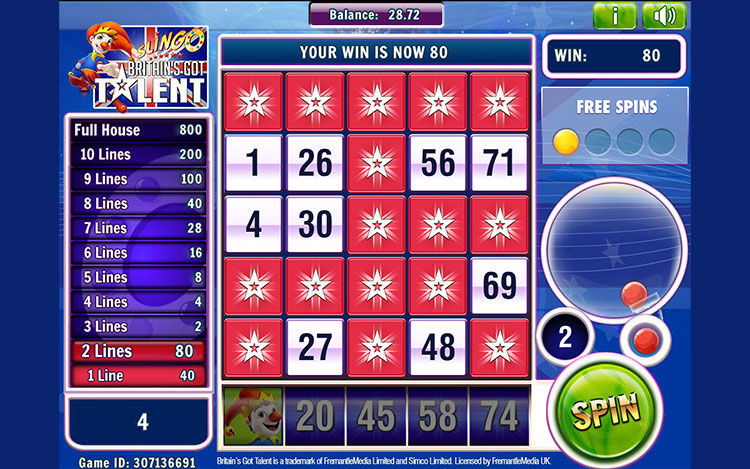 A staple of most Slingo games; if you get three or more Joker/Super Joker symbols in a single spin of the reel, you'll be awarded the Joker Bonus, which is an instant cash payout.

Landing the 'free spin' symbol during the game will award players with a free spin to be played at the end of the main game.  Additionally, once the initial 11 spins have been used up, players can pay for up to 4 additional spins (this amount will be lowered if free spins have been awarded during play), for a total of 15 spins every game. It's worth mentioning that the 'free spins' symbols will be removed from the reels during extra spins and the cost for each spin will change to reflect the current state of play.

Dazzle the Nation in Slingo Britain's Got Talent on Slingo

Play Slingo Britain’s Got Talent at Slingo; the home of the very best Slingo games. Sign up today and play right away!

Rise of Olympus Online Slot Review: Spin the Reels With the Gods of Ancient Greece

Rich Wilde and the Tome of Madness Online Slot Review: Spin the reels with the iconic Rich Wilde once again!