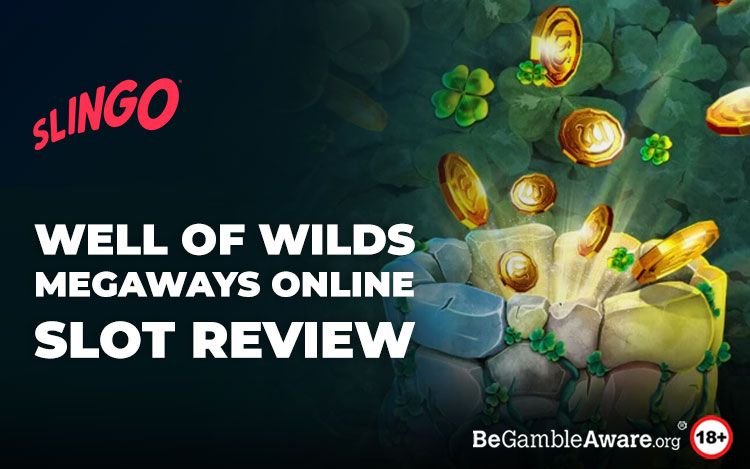 Red Tiger Gaming’s Well of Wilds Megaways online slot game is one of many names by the company to use the popular Megaways mechanic. The feature gives the game an impressive 116,749 different ways to win on any given spin. As well as this, Red Tiger has packed the game with innovative and enjoyable bonus features. Let’s take a more detailed look at the title in this Well of Wilds online slot game review.

The Well of Wilds online slot game leans heavily on the classic luck of the Irish theme. While many slots have used this in the past, Red Tiger Gaming has put a slightly different spin on things, tying it in with a wishing well and other superstitious objects.

The game’s grid sits on a pond that is covered in lily pads. A ripple effect adds some life and gives the impression that the reels are floating, while some nice animations will appear throughout the game and are triggered by the bonus rounds.

A feather and a purse full of coins are the game’s highest paying symbols, while a golden coin acts as a bonus symbol, while a horseshoe is the game’s wild symbol.

The Basics: How to Play Well Of Wilds MegaWays Online Online Slot 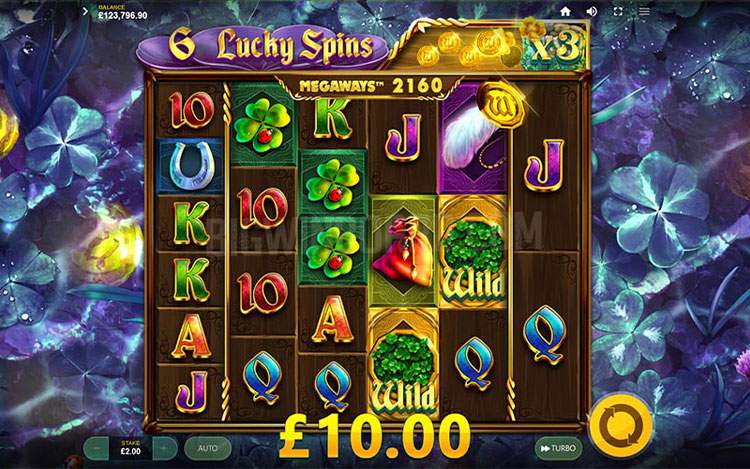 Like most Megaways titles, Well of Wilds Megaways has a cascading wins feature. Whenever players land a win, the winning symbols will disappear and new ones will fall into place. This will continue to happen until there are no winning combinations left in the game.

The Well of Wilds Megaways RTP is listed as 95.67% by Red Tiger Gaming, which would put it around the industry average. The game has been given a full 5/5 for volatility, putting it in the high volatility category. The minimum stake in the game is £0.10, while the maximum stake will vary depending on the version you play. Generally, the maximum is £10, which makes this the kind of game that is better suited to those with smaller budgets. 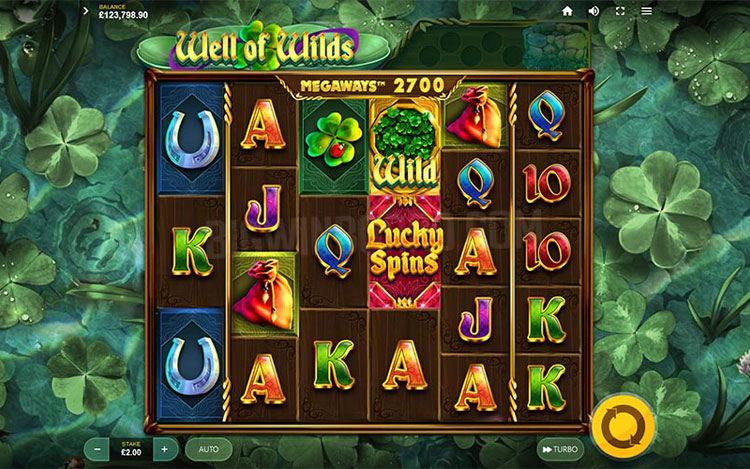 The first feature you will probably encounter in the Well of Wilds online slot game is the Well of Wilds bonus. This can happen on any random spin. When it occurs, a well will appear on the middle four reels and will add extra wilds to the reels. These wilds will stay in place until the end of a winning cascade.

The bonus spins round here is called Lucky Spins and you will get nine of them when you land three scatter symbols. For every additional scatter you get, you will be rewarded with three additional spins up to 18. During this round, the lucky coin symbols will be collected. There is also a progressive multiplier added to the reels for this round.

If you can collect five of these golden coins, then you will unlock the Lucky Wishes bonus. This will give you the option of additional spins, a multiplier, or extra wilds being added to the reels.

Fans of Megaways online slot games will love what Red Tiger Gaming has done here. Well of Wilds Megaways mechanic does a great job of utilising its titular gimmick as well as adding some great bonuses on top. The Well of Wilds and Lucky Wishes bonuses help enhance the gameplay and keep things different, while the Lucky Spins round provides some strong winning opportunities. There are many great Megaways titles you should check out at Slingo Casino, and this is definitely one of them.