Slingo Meets Starburst in Our Most Highly Anticipated Collaboration Yet

Boy, have we got something special for you! We’ve been working hard behind the scenes with top games developers Gaming Realms and NetEnt to bring you our most exciting mash-up yet – Slingo Starburst!

For those of you who don’t know, Starburst is one of the most popular slots in the world. Its retro, arcade-style theme, powerful Win Spin symbols and amazing real money prizes have made it a firm favourite with players the world over.

So when we got the opportunity to sprinkle a little of our own Slingo magic on Starburst, we jumped at the chance.

In Slingo Starburst, players complete Slingos on the grid to work their way up the win ladder on the left of the screen. Get three or more Slingos to gain access to the Starburst bonus game, where you’ll spin the Starburst reels and be awarded guaranteed wins!

Slingo Starburst has a few features you’ll recognise from other Slingo games, as well as some exclusive new additions:

Expanding Starburst Wilds trigger a re-spin in the bonus game

How To Play Slingo Starburst 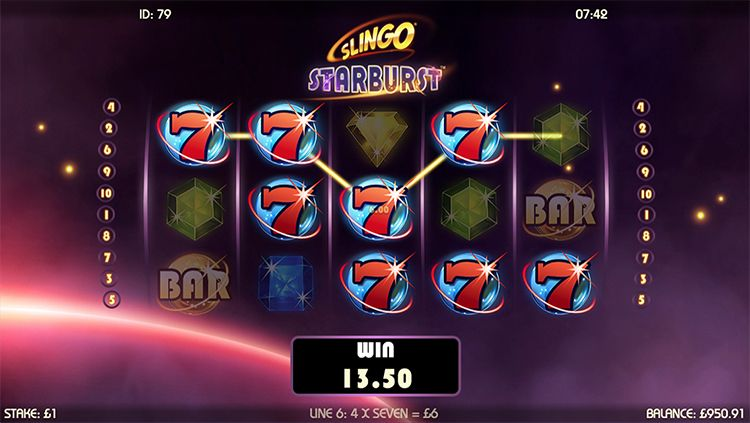 Slingo Starburst also has an exciting Extra Spins feature which is triggered at the end of each 10-spin game. A bonus wheel will spin and you’ll win one extra spin if you land in the correct segment, with the chance to win up to five extra spins in a row! 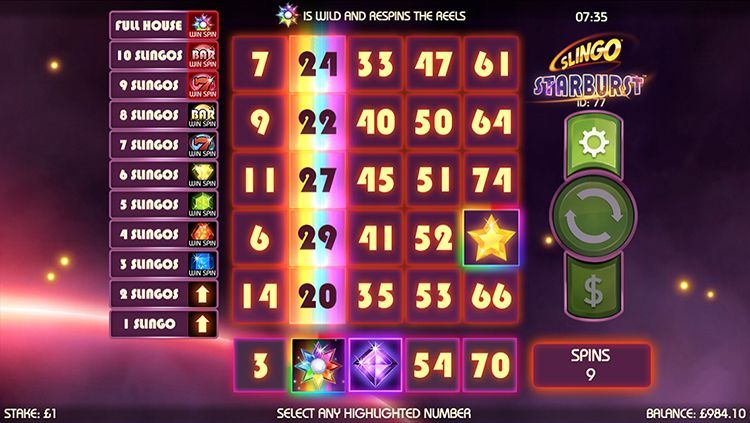 History of Slingo and Starburst

Starburst first exploded onto the online casino games scene back in 2012 as the brainchild of top games developers NetEnt. Its colourful graphics, simple format and high-energy gameplay made it an instant hit with players worldwide, and it remains one of the top online slots in the UK to this day.

The unique Slingo game format has had similar success. Our original combination of slots and bingo has been delighting audiences for over 25 years, and our collaboration with our amazing games developers Gaming Realms means we can keep creating exciting new Slingo titles with the latest gaming technology.

We’re thrilled to announce the launch of Slingo Starburst – we hope you love it!

Now you’ve got the lowdown, it’s time to play Slingo Starburst! And where better than the official Slingo site? With over 1,200 Slingo, slots and casino games plus amazing customer service and a fun gaming environment, Slingo.com is your #1 destination for an out-of-this-world gaming experience. See you on Planet Starburst!