Eyecon's Beez Kneez is a 5-reel, 25-pay line slot game with fascinating bonus features that are sweet as honey! Scatters, wilds, and free spins are all included in the game.

Bound to get you buzzing, the Beez Kneez slot online by Eyecon features lots of sweet honey and stripy bumblebees! The honeycomb reels are placed against a brilliantly contrasting blue sky and fields of flowers, adding to the slot game's already joyful and peaceful atmosphere.

Bees use their wings to go from bloom to bloom collecting nectar, which is like gold to them. Here’s hoping you also get something valuable from this slot too!

Beez Kneez slot machine has an entire meadow of symbols for you and your bee friends to enjoy.

There are ten regular symbols and two special symbols in this game, all beautifully designed. You can find a honey pot, a sunflower, a pretty pink daisy, an adorable sleeping bee, a toadstool, an apple, a caterpillar, a beautiful butterfly, and a majestic dragonfly! That’s not forgetting the most important symbol of these: the Queen Bee, which has the highest payout of all of the base game symbols.

The Basics: How to Play Beez Kneez Online Slot 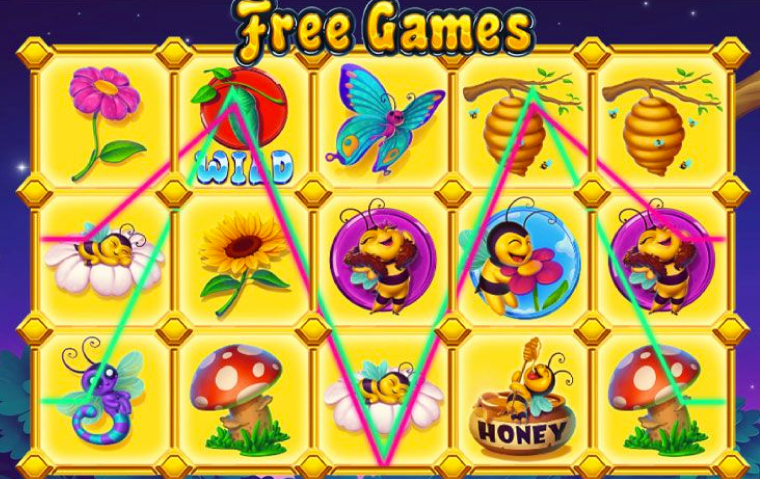 To play the Beez Kneez game, browse to Slingo.com and load the slot on whatever device you like, either online on a computer, or as a mobile slot on your phone or tablet. Instead of a row of fruits, you'll find a variety of bees and similar symbols spinning around in this variation of a classic slots game. With five reels in action, there are plenty of figures flying about your screen, and all of them are easy to recognize. Five reels, three rows, and 25 customizable pay lines are standard setups for the Beez Kneez video slot. Unselected pay lines are shown along the edges of the reels, and each pay line is greyed out. The betting range is suitable for both penny slot enthusiasts and casual bettors alike.

In the Beez Kneez slot UK, you can start spinning at just 25p, with a maximum bet of  £13.00 per spin. You can also place a line bet, which ranges from €0.01 to €0.50 using the convenient control button to assist you.

Beez Knees slot game has a theoretical and rather generous RTP of 95%, and you could win up to 5000x your wager! 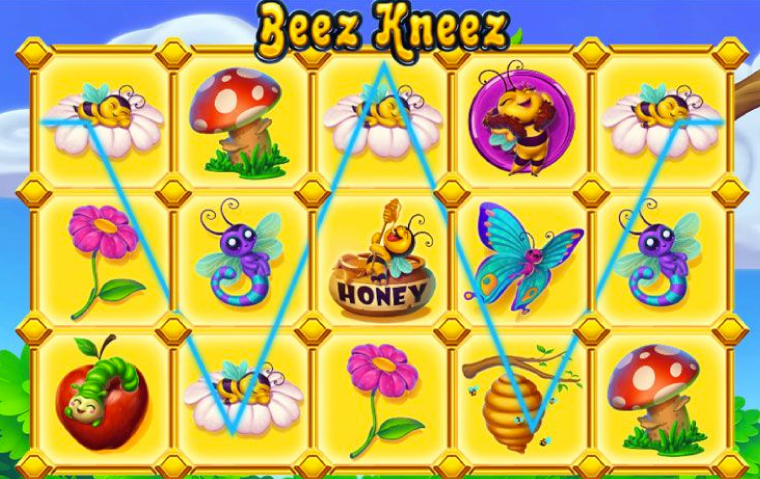 The Scatter symbol in the game is a worker bee, while the Wild symbol is a green cocoon on a stem . Except for the Scatter Worker Bee, the game's Wild symbol, may be used to substitute any other symbol. These symbols activate the bonus features in the Beez Kneez slot machine.

The feature is triggered when three or more Scatter Worker Bee icons appear anywhere on the reels. When the triggering combination is engaged, you can obtain one pick for each Worker Bee symbol in the triggering combination. Each of your selections has a chance to win a reward worth up to 100 times the total stake, and the prizes are added together. This may happen in both the base and free versions of the game.

To start the free games, you must land three, four, or five scattered Cocoon symbols anywhere on the reels. You may win up to 15, 20, or 25 free games this way. The line win payouts are tripled during free games. This feature can be triggered up to 15 times.

The game's most recent win might pay twice or nothing while this feature is engaged. You must choose one of the two alternatives available to you appropriately. This can continue until you pick Take Win, or until the next win reaches a certain threshold, or until you make 5 accurate selections, or until you choose the incorrect option. This bonus round is separate from the main game.

If you’re in it for the honey, head on over to slingo.com to play the Beez Kneez slot game! If this game is too sweet for you, then why not try some of our other selections of casino games, Slingo games, Bingo games, and slot machines!