NetEnt created the Berry Burst online slot, which makes excellent use of the cluster pay feature. In the Berry Burst online slot, you can win for landing five or more symbols next to each other, rather than just landing symbols in a line. In fact, clearing clusters of 15 matching symbols can lead to the biggest payouts! Berry Burst is a slot machine that takes fruity fun to new heights and is ideal for fans of other famous slot games like Starburst or mobile match-3 style games.

The Berry Burst slot machine has a bright and happy color scheme, which echoes the match-3 mobile games it was modeled after. Because of its style, the Berry Burst slot is great played on the go via the Berry Burst mobile slot, but this fruity classic also looks great on larger-screened devices. As you may have guessed by the name of this slot the Berry Burst slot game has a fruity theme, with lots of juicy fruits making up the symbols and adding even more color to this game.

The Basics: How to Play Berry Burst Online Slot 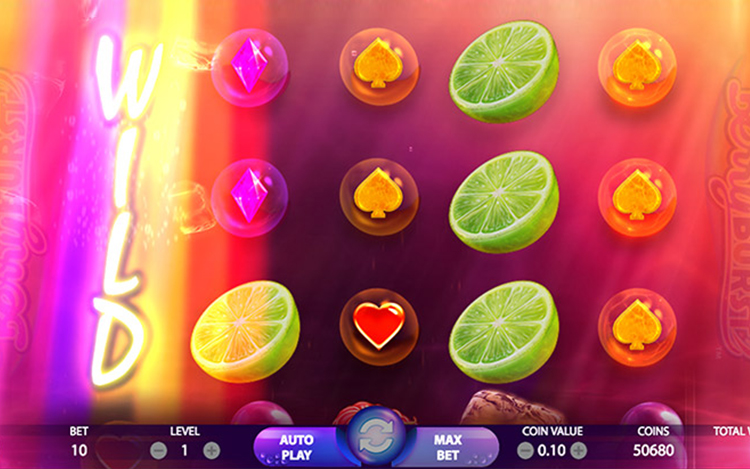 The first thing you'll notice while playing Berry Burst is that there are no traditional reels; instead, because this is a cluster-mechanic slot, you'll be presented with a gaming grid filled with symbols. There are no paylines in this game, so you'll be awarded for forming clusters of symbols.

While the Berry Burst slot appears to be unique at first glance, it is actually rather similar to other slots in terms of how it is played. Set your wager amount using the + and - buttons, or select ‘max bet' if you want to play 'go big or go home' style. When you're satisfied with your wager, press the 'spin' button to start the game grid. Berry Burst free play is available if you need more time to decide if Berry Burst is the correct slot for you. All cluster wins are paid out according to the paytable for the game.

The Berry Burst online slot has a generous RTP of 96.56% which is well over half a percent over the market average of 96%. Played at medium volatility, the Berry Burst slot online caters to wagers starting at just 10p per spin, all the way up to £200 per spin for the high rollers.

There are no Berry Burst slot free spins, but there’s still an exciting variety of bonus features such as the cluster pays mechanic which means that instead of pay lines, winning combinations are made by landing clusters of matching symbols, with the larger the cluster, the larger the payout. The Wild symbol looks like a block of ice and is able to stand in for all other symbols. When a Wild symbol is landed on the reels it will expand and stick to the reels for a free re-spin. If another Wild is landed the process will repeat itself. This will happen until the reels are full of Wilds or no Wild symbol is added.

If you want to give the Berry Burst slot a try then come and say hello to us at Slingo. At Slingo.com you can not only play the fantastic Berry Burst slot machine, but also a whole host of other slots, Slingo games, card games, table games, and even live games too. Sign up and play today.