A large, blue, amiable genie appears in the magically themed Crazy Genie slot UK. He frequently appears on screen while you play, and Red Tiger's incredible animations and endearing facial expressions have wonderfully brought him to life. The game's other characters, such as the magic carpet that walks and the snake that coils itself around a pile of gold money, also add to this charming and magical theme.

The reels in the base game are framed by golden pillars, rugs, and Genie's magic lamp, which is set on an Arabian market street.

The Crazy Genie slot game is an Aladdin-style journey that centers on the Genie. The Genie emerges from his lamp when you start the game and moves across the screen, leaving the reels in his wake. A very intricate background gives off a Middle Eastern vibe. The golden reels are surrounded by lamps, rolled-up rugs, gems, blue silk, and clay stones.

There are other settings as well, though as there are five distinct bonus games that can be found scattered across the city or the palace. Flute-driven Arabian music is played throughout the entire game.

The scimitar, serpent, and magic carpet are among the vivid symbols in Red Tiger's Crazy Genie slot machine. The Scimitar offers the highest payout: get three, four, or five matching symbols on a payline to win 30x, 100x, or 300x your wager! The turbaned Cobra gives odds of 20x to 200x your wager. If you match three or more Magic Carpet symbols, your payout will range from 15 to 150 times. Win 10x to 100x when the Genie's Hand symbol appears.

Standard playing card suits are among the lower-paying symbols; each one grants a different prize. Up to 80x, 60x, and 50x, respectively, are awarded for the aces, kings, and queens.

Three Jacks or three Tens must be matched to win up to 40 times your wager.

The Basics: How to Play Crazy Genie Online Slot 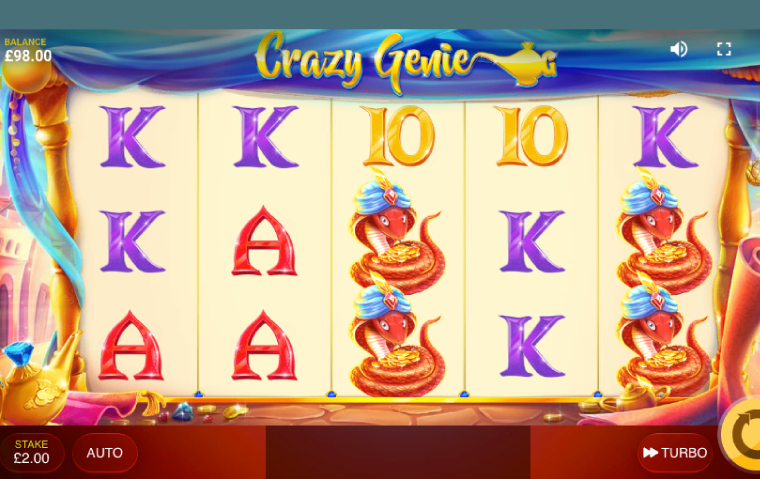 Once loaded at Slingo.com on your chosen device (including on the go via the Crazy Genie mobile slot) you’ll want to start by placing your stake. Once the bet menu has been opened by using the "stake" button, simply click on the bet of your choice.

Once your wager is set press the "spin" button to see if you can line up three or more symbols on a pay line. Additionally, if you get bonus symbols, the Wheel of Bonuses will start spinning and one of five bonus features will be awarded.

To view the paytable, which details the different symbols and bonuses, tap "pays," and to read the rules in full, tap "help."

The Crazy Genie slot online has a theoretical RTP of 96.22% putting it nicely above the current market average, though this does come at the cost of a high volatility rating. There is a variety of wagers available, ranging from 0.20 credits to 500 credits each spin, so there is something here for players of all skill levels, from newcomers and casual players to big spenders. 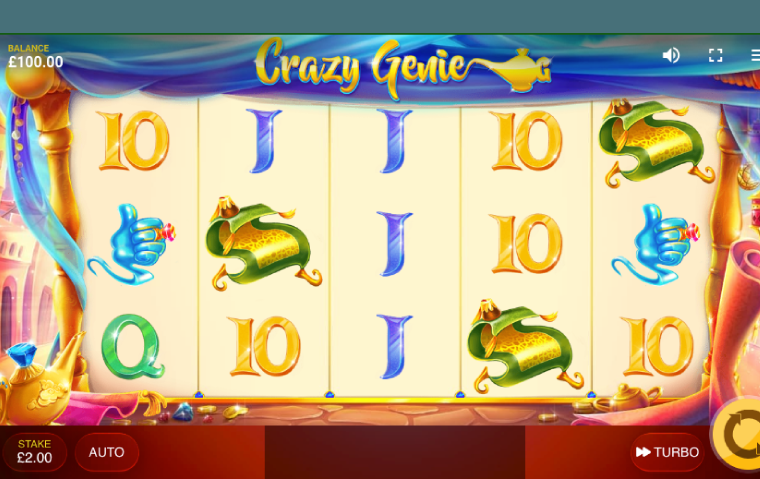 While there aren’t any Crazy Genie free spins, there are a whole lot of other features crammed into the magic lamp that are just waiting to enhance your gameplay:

Three, four, or five symbols on a pay line in the Crazy Genie Wild result in payouts of 30x, 100x, or 300x your wager. It also acts as a stand-in for all symbols that pay.

To spin the Wheel of Bonuses, you must land three Magic Lamp symbols on reels 2, 3, and 4. Any of the ensuing incentives may also be given out by Genie personally.

Gold coins cover the reels; spin them for large payouts!

Pick one from Genie's list of enticing presents to find out what you got!

A variety of Genie's cave treasures will be displayed to you.

To find out how much you've won, choose one.

Rub the enchanted Genie's Lamp to receive a reward!

This bonus feature focuses on a piñata in the form of a lamp. The Genie will hit the piñata with his stick once you click it to uncover gold coins and distribute rewards.

As you can tell by our review, the Crazy Genie slot online certainly shapes up to bring you some crazy good fun. To try the Crazy Genie online slot, as well as a whole host of other great casino games, sign up and play today at Slingo.com.