Look no further than the Gemix slot online from Play N' Go if you're seeking a slot that's both joyful, entertaining, and exciting too. The Gemix online slot flips the standard slot technique on its head; there are no pay lines, and instead, winning combos are formed by forming horizontal or vertical clusters. The slot machine has a fairy-tale theme and takes you on a journey through three separate worlds, each with its own cast of characters and magical abilities, so you're not only playing a slot machine with the Gemix slot game but also embarking on an adventure!

The graphics of the Gemix slot online are brilliantly colored and well-rendered, and the overall appearance and feel is that of a fairy tale. The graphics achieve a 3D-like aspect, and as you play, they help build suspense and fill in the tale.

The soundtrack of the Gemix slot machine is also quite peaceful and nicely complements the game. It's a little bit whimsical and a lot of fun. You can control the level to your preference, so you may turn it up, mute it if you like to spin in peace, or play your own music.

The following symbols are used in the Gemix slot:

The Basics: How to Play Gemix  Online Slot 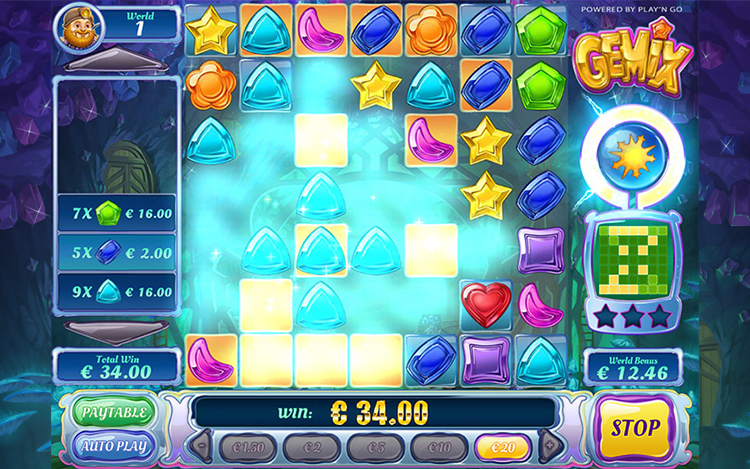 The Gemix online slot has a very generous RTP of 96.75% and with a medium volatility, rating should be suited to most players. Bets for the Gemix slot start at just 50p per spin but can also cost up to £200 per spin if you have the budget for it.

The Gemix slot game is played over three levels which sets it apart from many other slots. The levels are as follows:

The jovial bearded miner is in charge of the first world you'll visit on your Gemix slot game trip.

After non-winning spins, this character may appear at random, causing up to ten falling wild lanterns to appear on the grid, assisting you in landing winning combos.

The second world is the Princesses world, which has a lovely doll-like creature wielding an enchanted lollipop that expands from one edge of the game grid to the other on any non-winning spin.

Wizard’s World
This is the last realm you'll explore, and it's ruled by the wise wizard. On non-winning rounds, he has magic books that operate as sticky wilds, appearing around the border of the game grid and sticking in place to assist you to land numerous winning combos.

Each winning combination will charge the meter, which will activate and trigger one of the following four features when the meter reaches 20:

The Nova Blast feature allows new gems to fall into position by causing one symbol to explode and destroying all touching symbols.

The crystal warp will choose one symbol and change all other symbols on the grid to that symbol. The light beam randomly selects a symbol and then releases lightning strikes that change the symbols it hits.

Finally, Chain Lightning will connect two corner symbols, then strike across the grid, popping and replacing all symbols in its route.

If a player lands multiple combinations that charge the meter to 40 or more, the meter will be supercharged, and all prizes resulting from the feature will be multiplied by three times.

There are no Gemix free spins (at least in the traditional sense).

Here at Slingo you can play Gemix as well as tons of other slots, Slingo games, and bingo too, all on any device you choose. All our games are fully mobile-optimized so you can play via mobile slots or on your PC if you prefer. Sign up and play today!