The Golden Goddess slot UK is inspired by Ancient Greek mythology and center stage is the Golden Goddess herself, the Goddess of love, Aphrodite. Featuring warm, glowing gold reels, the serene majesty of the ancient gods is captured perfectly.

The following symbols are used in the Golden Goddess slot game:

The Basics: How to Play Golden Goddess Online Slot 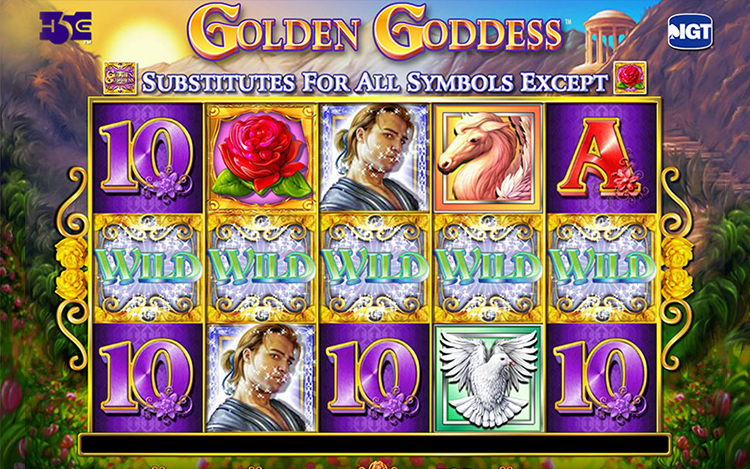 With the Golden Goddess slot, getting started is simple. You must first pick how much you want to bet per line. To increase or reduce your line wager, use the arrow buttons on the screen. Because the Golden Goddess game has 40 fixed pay lines, whatever you put here will be multiplied by 40 for your total wager. If you choose to gamble two coins each line, your total stake per spin will be 80 coins. All that's left to do now is press the 'spin' button and spin the wheel for the first time.

At random, the reels will spin and stop. Landing 2 (in the case of the logo, Aphrodite, or Hephaestus) to 5 successive symbols across a pay line from left to right results in a winning combination. The winning combination will be highlighted, and you'll be paid according to the paytable for the Golden Goddess slot machine.

While enchanting, the Golden Goddess slot machine isn’t going to be for everyone due to a low RTP of just 94.75%. It is worth noting, however, that as a low volatility slot payouts should be more frequent; so we’ll leave it up to you whether you think this balances out the low RTP. Wagers on the Golden Goddess slot game start at just 40p per spin but can reach a whopping £800 per spin.

This is the characteristic that distinguishes the Golden Goddess slot from the rest. Matching symbols can stack on the reels, generating gorgeous full-size graphics and potentially awarding you large prizes. Except for the Rose bonus symbol, which may only stack on reels 2-4, other symbols can stack on any reel.

The free spins bonus is triggered by landing 9 Rose symbols on reels 2-4. 7 free spins will be given to players. To reveal one of the game symbols, players must pick one of the roses that appear on the screen. This symbol becomes the round's super stack symbol and can provide multipliers based on its value.

You can play Golden Goddess as well as a huge number of incredible slot machines at Slingo.com. Our site is fully optimized across all devices meaning you can play Golden Goddess on your PC or laptop, or as a mobile slot if you choose. At Slingo, we also have a wide range of casino games, Slingo titles, and more, so sign up and play today and explore everything we have to offer.