If you have fond memories of playing Monopoly with your family, you'd better get ready because the  Monopoly Big Money Reel slot UK is a slot machine designed for adults.

This slot from seasoned creators WMS is another Monopoly-themed game that was inspired by the popular board game Monopoly. This 20 pay line slot game incorporates all the essential components of the traditional board game and transforms them into an entertaining and difficult slot machine. It is jam-packed with a tonne of extra features.

At the bottom of the gaming screen, there are piles of wealth and gleaming gold coins in the Monopoly Big Money Reel game's vibrant, colourful appearance.

Mr. Monopoly is the highest paying symbol and is worth a handsome 7.5 times your total stake when five of them appear on a payline going from left to right. The purple and red hotel high-rise, a stacked symbol worth 6.25 times your total wager for five in a row, is the next-highest value symbol.

Next is Scottie the Dog, who is seated in front of a kennel that is strikingly similar to one of the iconic green houses from the board game. He is a stacked symbol that pays out 5 times your total stake for five of a kind on a payline.

The Wild, symbolised by an "M" adorned with diamonds, is another significant emblem. Except for the currency notes, this profitable symbol can take the place of any other symbol. Land five of the banknotes, which have values of 20, 50, 100, 200, and 500, anywhere on the reels to unlock the Big Money Reel Spin Bonus and up to 50x multipliers on your entire wager! Due to the Monopoly Big Money Reel casino slots' complete gadget optimization, (you can play the game on the go via the Monopoly Big Money Reel mobile slot) getting started with this game is really simple. Click the + and - buttons to adjust your wager until it is the right size for you. Since there are numerous betting possibilities, practically every player will discover that they are accommodated for here.

The only thing left to do is click the spin button to start the reels spinning once you're satisfied with your wager. Reels will randomly start spinning and stop. Landing three or more matching symbols along an active pay line beginning on the left-most reel results in winning combinations. The paytable will be followed for all payouts. 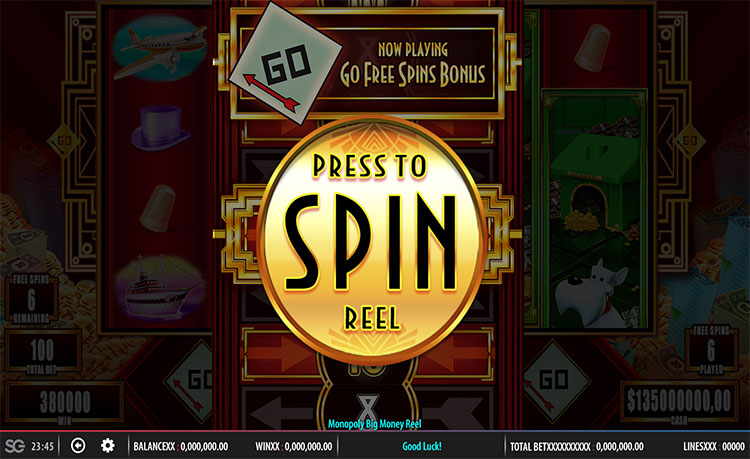 This is the mysterious symbols feature for the Monopoly Big Money Reel slots.

Up to five more note symbols may be added to the reels when this bonus is activated, with multiplier values of 5, 10, 15, 20, or 50 times your initial bet.

With this function, players can earn up to 2.5 times their wager. A bankroll of $1,000 is provided to each player, which is multiplied by their bet per pay line. Players must choose the appropriate card from Mr. Monopoly in order to receive the bonus.

Players of the Monopoly Big Money Reel receive free spins as they progress through the game rather than an all-encompassing free spins bonus round.

The Monopoly Big Money Reel slot game's jackpot prizes can be won here. Players can earn up to 250 times their stake, in-game multipliers, or even two additional bonus rounds when five-note symbols land on the reels, activating the bonus feature.