Join the Lucky Leprechaun on a quest to find pots of gold at the end of the rainbow in Rainbow Jackpots! Win up to 100 free spins in this magical 5x3 slot from Red Tiger Gaming, try to grab tasty multipliers in the mouth-watering Beer Bonus, and find out what else the Lucky Leprechaun has waiting for you. You could even walk away with 1,054x your bet!

The Rainbow Jackpots online slot is based on the ever-popular Irish theme, and includes some of the most traditional items associated with the Emerald Isle. The Lucky Leprechaun is just one, and he even appears in animated form at times. You’ll see him dressed in his bright green outfit with a magic pipe that can trigger positive gameplay effects. And four-leaf clovers, golden horseshoes, and rich Irish beer show up on the reels, too!

While most of the symbols in Rainbow Jackpots revolve around the Irish theme, standard playing card symbols also appear — Ace, King, Queen, Jack, and 10. These award the smallest prizes in the Rainbow Jackpots slot UK: the 10 awards 1x your bet for 5, making it the lowest-paying symbol in the game.

The Wild is the highest-paying symbol, though, giving you 40x your bet for 5 on a payline. This is followed by the Four-Leaf Clover (24x for 5) and the Golden Horseshoe (16x for 5).

The Basics: How to Play Rainbow Jackpots Online Slot 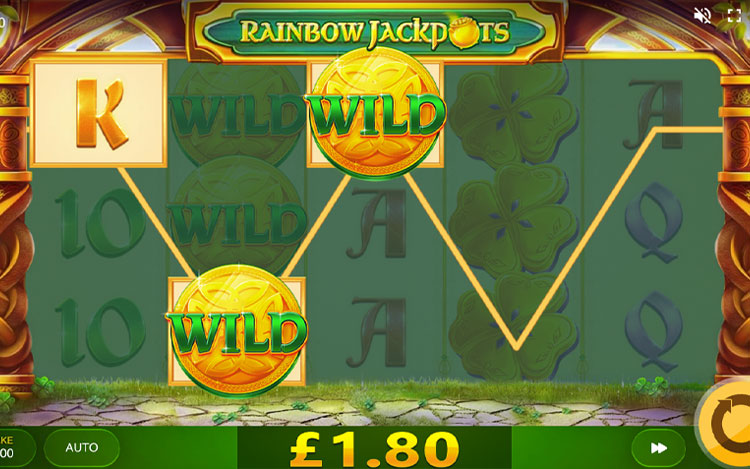 When you launch Red Tiger Gaming’s Rainbow Jackpots mobile slot, you can either adjust your bet first or spin the reels straight away instead.

If you want to increase or decrease your bet, use the PLUS and MINUS buttons on either side of the TOTAL STAKE indicator in the control panel. You can start from as low as £0.10 or go as high as £100, with numerous levels in between.

Hit the yellow SPIN button to start rolling the reels and see if you can create a winning combination of matching symbols! Just land 3 or more symbols on one of the 20 paylines to win a prize based on the symbol’s value on the paytable.

Certain symbols in the Rainbow Jackpots slot online, such as the Pot of Gold, trigger the game’s various bonus features.

Rainbow Jackpots has an RTP of 96.15% and is considered a high-volatility slot. You can bet from a minimum of £0.10 up to a maximum of £100, depending on your personal wagering preferences. You can win up to 1,054x your bet when you play the Rainbow Jackpots slot machine. 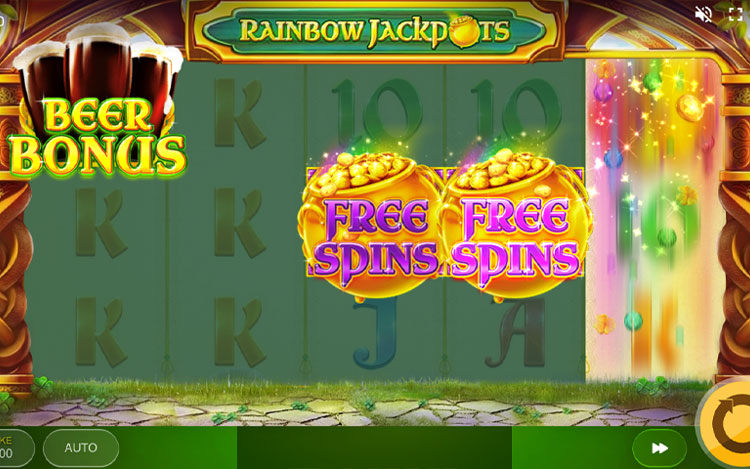 Rainbow Jackpots’ Wild symbol features a golden coin. This substitutes for other symbols to help you build winning combinations, ideal if you only have one or two matching symbols on a payline.

The Scatter Symbol is a pot of gold, and can appear in any position on the reel. Land three to trigger the Rainbow Jackpots slot Free Spins feature.

After matching three Free Spins symbols, you’ll be invited to pick one of three pots of gold to find out how many free spins you’ve won.

The Leprechaun may appear and blow a Mega Free Spins symbol onto the reels from his magic pipe. This symbol takes up several positions on the grid to award more free spins and give you chances to claim massive wins.

During the Symbol Swap feature, the Lucky Leprechaun blows high-paying symbols out of his pipe. These land on the reels and create guaranteed wins.

Land three Beer Bonus symbols to play this instant-win round. Choose a glass and watch that dark beer flow from the golden tap — the higher it fills your glass, the more you’ll win.

You don’t need to pick just one glass in this enhanced feature — beer flows into all three glasses and you can grab all three prizes!

Rainbow Jackpots is one of the best Irish-themed slots available, bursting with unique bonus features with the potential to award huge payouts. The animated Leprechaun imbues the game with immense charm, while the addition of the bonus features’ Mega versions makes for a deeper gameplay experience, too.