Red Flag Fleet is a video slot by WMS Gaming that features a 6-reel, 192-pay line layout, and the Reel Boost engine. The game is set in the South China Sea in the early 1800s and can be played for anywhere between 40p and £80 per spin. It's inspired by the legend of Ching Shih, a notorious female pirate captain who frightened merchants, pirates, and the Navy. Your mission is to reenact her fortune-hunting adventure.

The Red Flag Fleet slot machine is a 6-reel, 192-pay line video slot machine from WMS Gaming. It has a distinctive reel layout than most online video slots you've played before. On its side, this strange 6-reel configuration resembles a pyramid. Two symbols appear on the first reel, three appear on the second reel, and four, five, six, and seven symbols appear on the third, fourth, fifth, and sixth reels, respectively. This slot includes wilds, stacked symbols, stacked wilds, and a wild reel, as well as free spins.

Pirates are well-known in popular culture, and Red Flag Fleet is based on one of history's most famous and successful pirates, a woman who put Blackbeard to shame. Ching Shih climbed from humble beginnings to command a fleet of hundreds of ships manned by tens of thousands of crew members in the China Seas. Ching Shih's Red Flag Fleet was the world's largest, and he ruled it with an iron fist. She devised her own set of laws and taxation, which she then applied not just in the fleet but also in the many coastal settlements that fell under her control.

Ching Shih's enormous success has spawned novels, plays, video games, television, and film since her death, and now, WMS has brought the story to life in this enchanting and immersive slot game.

In the Red Flag Fleet slot UK you have a chance to win up to 2,400 times your original wager. The winning paylines are connected by a rope, which is a remarkable sight in and of itself. Symbols include the Lady Pirate, the Pirate Ship, the Red Flag Fleet trademark badge, and the signs for King, Queen, Ace, and Jack. The minimum and maximum bets are 0.40 and 100, respectively.

The Basics: How to Play Red Flag Fleet Online Slot 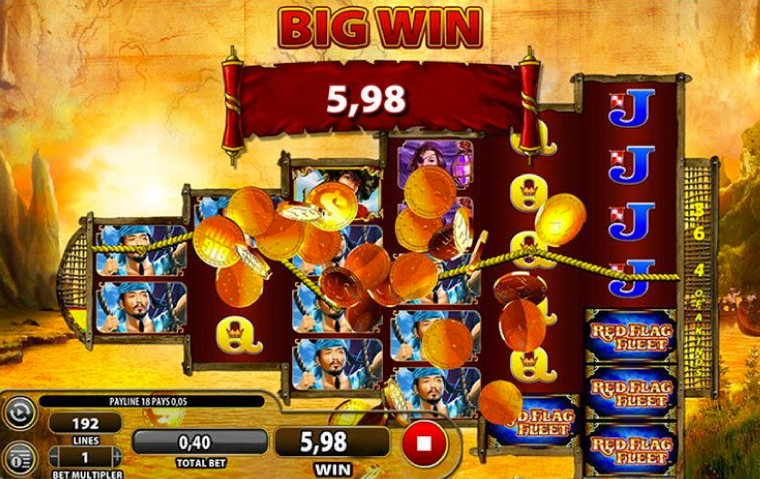 The Red Flag Fleet slot game has a unique configuration thanks to the Reel Boost Engine. The first reel has only two rows, the second three, the third four, and so on until the final reel has six rows. It bears the look of a pyramid turned sideways. It may seem strange at first, and it may take some getting used to, but the game is rather simple and follows well-established rules. To begin playing the slot, simply load the slot on your chosen device including on the go via the mobile slot, and decide how much you want to wager per spin, just as you would with any other slot machine.

There are a total of 192 fixed pay lines in the game. Simply line up consecutive symbols across a pay line, starting from the left, to win (if you want to see potential pay lines, just click the paytable button for a full guide). The smallest bet is £0.40, while the biggest bet is £80. Toggle the plus and minus buttons in the bottom-left corner of the screen. Once you’re happy with your wager simply spin the reels and start playing.

As mentioned, the Red Flag Fleet slot online caters to wagers that start at 40p and extend up to £80 which means that most types of slot players will be catered for here. The Red Flag Fleet online slot has a medium volatility rating and a theoretical return to player of 96.04%. 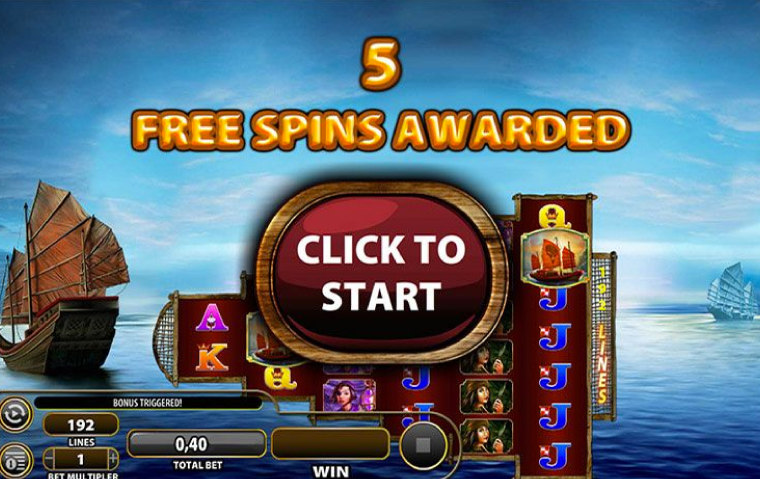 During free spins, you'll also have access to an alternative reel set. The sideways pyramid reverses, starting with seven rows on the left and shrinking in size until it reaches two rows on the right. The payouts remain the same, but two or three reels will become wild. You can earn extra free spins by matching more Bonus symbols during a free spin.

In the wild reel feature, 2 to 3 symbols are randomly transformed to the wild symbol on each spin.

To play the Red Flag slot sign up and play today and Slingo.com and get ready to hit the high seas and score that all-important booty!