Slingo Deal or No Deal Review

Welcome to Slingo Spotlight! Today we’ll be shining the lights on Slingo Deal or No Deal, the highly popular game inspired by the iconic gameshow known the world over. In this article we’ll be taking a closer look at this game, so you know exactly what you’re getting in for should you choose to play this title.

Deal or No Deal is a smash hit game show known around the world and now it can be played from the comfort of your own home in the Slingo-style game Slingo Deal or No Deal. Pick your lucky box and see the 25 other iconic red boxes fill the game grid. Achieve Slingos and receive the infamous Banker’s Offer. Deal or No Deal? The choice is yours!

How To Play Slingo Deal or No Deal

Just like other slingo games the Slingo Deal or No Deal slot is really easy to get started with. To begin, set your wager using the + and - buttons. Once done you’ll need to pick your lucky box from the 26 boxes that will appear on screen. This box will be set to the side while the other 25 will fill the game grid.

To get started press the ‘spin’ button to begin which is found to the right hand side of the game screen. The aim of the game is to mark off lines of matching numbers by matching them with the numbers that appear on the single reel. Marking off a complete line is known as a Slingo while marking off the entire grid is called a Full House and will award the highest prize payout. Achieving four Slingos will activate the Banker’s Offer feature. (More on this later).

Slingo Deal or No Deal Symbols 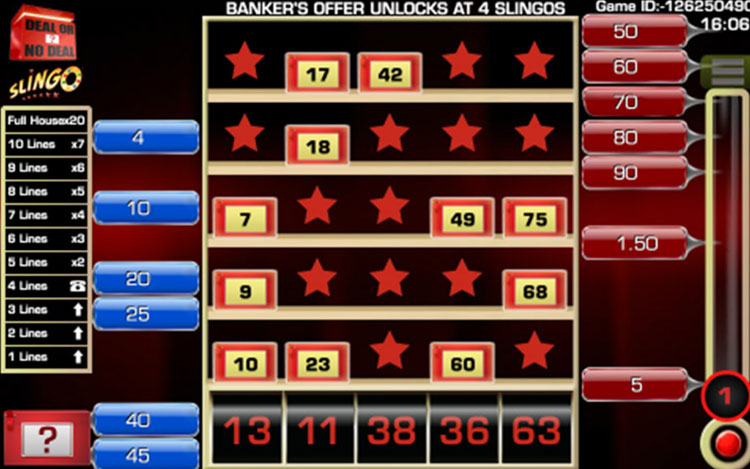 The Slingo Deal or No Deal slot has all the classic Slingo symbols which are as follows:

Slingo Deal or No Deal Features

In Slingo Deal or No Deal when a player completes four Slingos they will unlock access to the Banker’s Offer feature. Players will be given the following three options which will be offered after each spin until either the offer is accepted by the player, or the game concludes. The three options are as follows:

When the game first starts players pick a ‘lucky box’ from 26 boxes that are on offer. This box will be set aside and the other 25 boxes will fill the spaces on the game grid. The box that the player picks will be opened at the end of the game once the player accepts or declines the banker's offer.

Every Slingo Deal or No Deal game is played over 10 spins. After this players will play any free spins they have been given and can then purchase an unlimited amount of extra spins. The cost for each spin will reflect the current state of play and will be clearly labelled above the spin button.

Slingo Deal or No Deal Mobile

Have a go at Slingo Deal or No Deal Slingo

At Slingo you can play Slingo Deal or No Deal as well as a whole host of other top Slingo games, slots, and more. Sign up and play today!