Welcome to Slingo Spotlight where today Slingo Wild Adventure takes center stage. This is a Slingo slot that’s very different from the rest, so you may want to pay attention when reading this article, as we’ll be breaking down all the fantastic elements of this slot game.

It's time to visit the Slingo kingdom and meet the knights and lovely princesses that reside there in Slingo Wild Adventure. The goal of your journey through this enchanted realm is simple: spin the reels and look for multipliers, extra spins, and even enormous prizes!

Say hello to the Slingo courtiers, who come in the form of fantastic modifiers like super wild symbols that make sure every game is a thrilling journey.

With high-definition cartoon graphics and a medieval soundtrack, this 20-payline slot is a fantastic and magical addition to the Slingo family that will have you reaching for your sword and shield to start your own epic quest!

How To Play Slingo Wild Adventure It's safe to say this is Slingo like you've never seen it before, so read the game rules and paytable carefully before placing your first bet.

Speaking of symbols, those used in the Slingo Wild Adventure Slingo game are as follows:

All you have to do to begin playing the Slingo Wild Adventure slot game is set your stake and then spin! If you play your cards well, or in this case, spin the reels right, you could win the biggest multiplier in the game: 100x your total bet. 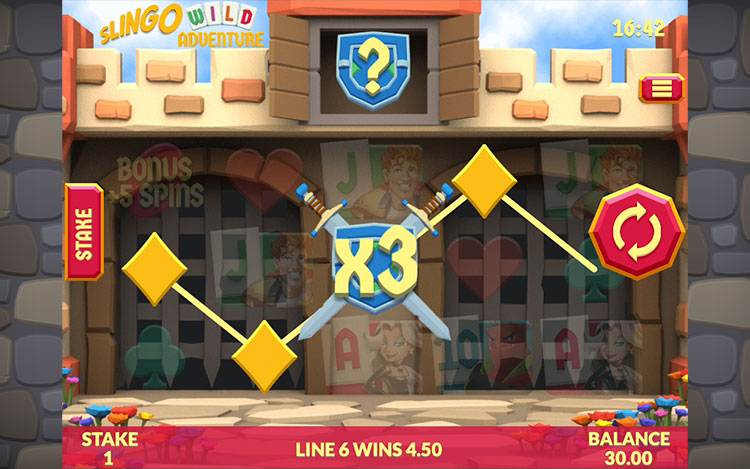 Landing a bonus symbol on reels 1, 3, and 5 activates the Slingo Wild Adventure bonus.

You will progress up the multiplier ladder with each Slingo you earn in the bonus game.

If you're on the verge of landing the bonus round but are missing one reel, you can use the bonus respins function to pay to respin the third reel.

The term Slingo Wild Adventure comes from the large number of wild symbols that may be found in this slot.

There are wilds and super wild symbols, both of which can be enhanced with the following modifiers:

2/3x Vertical Wilds
These wilds are used to increase line wins by doing the following:

Joker/Super Joker
This symbol is a staple of the Slingo online genre, Except for the bonus symbol, the Joker can be used to replace any other symbol. The Super Joker accomplishes the same thing, but he also turns into a mysterious wild symbol too.

Slingo Wild Adventure, as an HTML5 game, follows in the footsteps of the other Slingo games in terms of mobile compatibility. Its high-resolution graphics and vibrant colours stand out on both desktop and mobile displays, and its subtle player interface is ideal for those who like to play on a smaller screen. Slingo Wild Adventure may be played on both Apple iOS and Android devices.

Go on a Slingo Wild Adventure on Slingo

If you like the sound of Slingo Wild Adventure and want to go on an epic quest of your own then journey over to Slingo where you can play this slot as well as a whole range of other exciting titles suited to even the most adventurous of players.