The Sweet Alchemy slot, developed by renowned designers Play n' Go, transports us to Candyland for a unique trip. Prepare yourself for some intense sugar cravings!

Play'n GO's enchanting, sugar-coated Sweet Alchemy online slot will satisfy your sweet craving. For a tasty prize, connect a group of four or more identical candies in the 5 by 5 grid.

Winning clusters dissolve, letting the candies above them in the column fall into position. This allows you to enjoy more delicious prizes during each round!

The cartoonish, cascading-style slots from Play'n GO, including Moon Princess, Gemix, and Reactoonz, have been incredibly popular. The Sweet Alchemy slot UK is the next in that genre to enter the casinos. Players accustomed to Play'n GO's cascading-type slots will probably feel right at home when they see the setup and the metre, which is named the Sugar Rush Meter. It works similarly to the metre in Moon Princess, as an illustration. Each winning symbol causes the Sugar Rush Meter to rise; it resets at the conclusion of each game round.

With symbols like sugar cubes, beans, cones, and doughnuts as well as pastilles, nuts, hearts, and stars, the Sweet Alchemy casino slot offers a sweet theme with a magical twist. It is comparable to the well-known Candy Crush game in this regard. The latter is the most valuable symbol and will pay out 30 times your wager if you group 8 or more of the same sign together. There are numerous wild symbols as well.

The Basics: How to Play Sweet Alchemy Online Slot 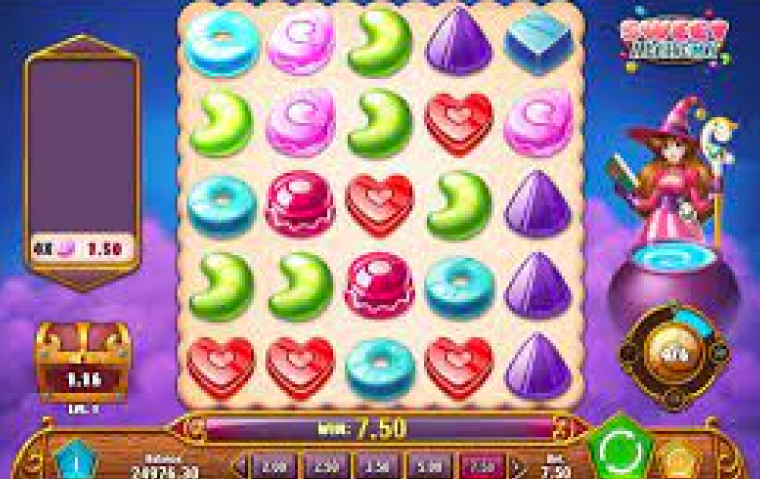 Load the Sweet Alchemy slot at Slingo.com to start playing. Any device, even mobile devices can be used to play the Sweet Alchemy slot machine. Start by deciding on your wager. Similar to well-known match-3 mobile games, Sweet Alchemy uses cluster pays rather than paylines, making it exceedingly easy to understand. This means that you can enter a complete stake instead of worrying about activating and deactivating paylines.

Once you're satisfied with your wager, press the spin button to get started. As previously stated, the reels will spin and stop at random. Winning combinations of matching symbols will result in rewards, and all payouts will be made in accordance with the paytable.

The Sweet Alchemy online slot treats the player with an above-average return to player (RTP) of 96.52%, just like a sweet delicacy would. This does have a high volatility rating, so if you'd rather play slots in a more laid-back manner, this Candyland journey might not be for you. Wagers on the Sweet Alchemy slot game range from 0.10 to 100 per spin. 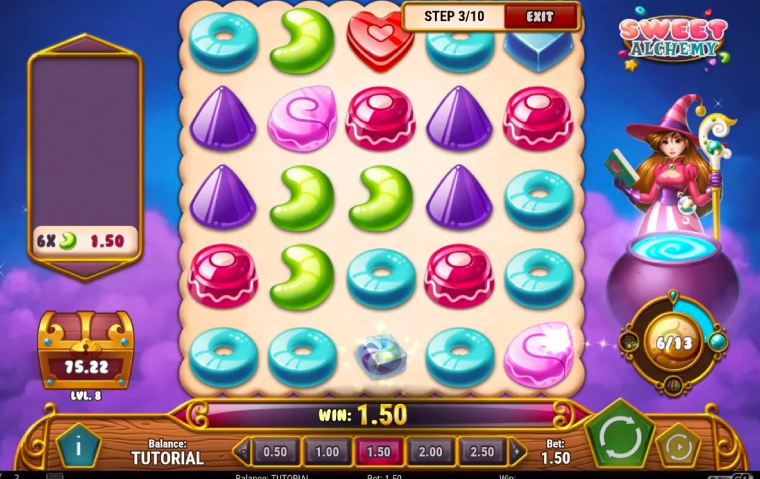 There are no Sweet Alchemy slot free spins, but don’t get too down, because there’s an exciting mix of super-unique features on offer in this game:

Two Dotted Wilds appear on the grid and act as any other symbol to create wins while also erasing every instance of a randomly chosen symbol off the grid when the Sugar Rush Meter fills up to 25 symbols in a gaming round.

Fill the Sugar Rush Meter with 38 symbols during a gaming round to start the Mix the Elixir Free Round with 3 Candy Spells feature. Following that, up to a maximum of 7 Candy Spells will be granted for the free round for every additional 3 symbols obtained in a gaming round.

To win this round and trigger the Elixir of Power bonus, you must collect all of the elixirs.

The Alchemist will create Candy Spells to help players accomplish this. Wins and cascades will happen as usual, and symbols will fall into position as they should.

Once there have been no more winning combinations the first Candy Spell will start. The cascades will repeat again before the second Candy Spell. The free round concludes once all Candy Spells have been used.

The following elements make up the Candy Spells:

Three levels make up the feature. Making successful combinations of the necessary symbols allows you to level up; to the right of the grid, a metre shows your progress. If you finished level 1 when the free spins ended, the Elixir of Power Bonus feature would activate; if you finished level 2, the Elixir of Power Bonus feature would offer greater winnings. The same holds true if you complete level 3.

When you finish the Elixir of Power Bonus feature, you unlock the Map feature, which lets you move one spot on the map. After finishing each of the three stages on the map, you can win scattered Treasure Chests. 15% of your base game winnings since the last Treasure Chest was opened will be given to you in each box. You'll receive significant rewards if you can go a long time without using the Elixir of Power Bonus feature.

Sweet Alchemy is a tasty treat of a game that you can play right here at Slingo.com. Sign up and play today.