You've probably heard about Microgaming's epic smash-hit slot Thunderstruck if you've played slots for a long or in the past. This slot, which was first released in 2004, maybe getting on in years, but it, like the Norse gods themselves, has an enduring charm that has players returning to spin the reels over 17 years later! Of course, there is a terrific sequel to this slot called Thunderstruck II that you can play if you want something a little more current, but if you want to go back to the beginning, the Thunderstruck slot online is a must-play.

Despite there being an iconic rock and roll song with this name, the Thunderstruck slot game is actually inspired by the Norse gods, most notably Thor and his hammer Mjolnir, both of whom feature as symbols in this title. The theming of this slot is very light, as you can expect from a game of this age, but the simple design definitely gets the job done.

Thor, Thor's hammer, lightning bolts, and, of course, the low-paying playing cards 9-A are among the symbols included in the Thunderstruck slot which are charmingly designed in an almost stained-glass style which is pretty unique.

The Basics: How to Play Thunderstruck Online Slot 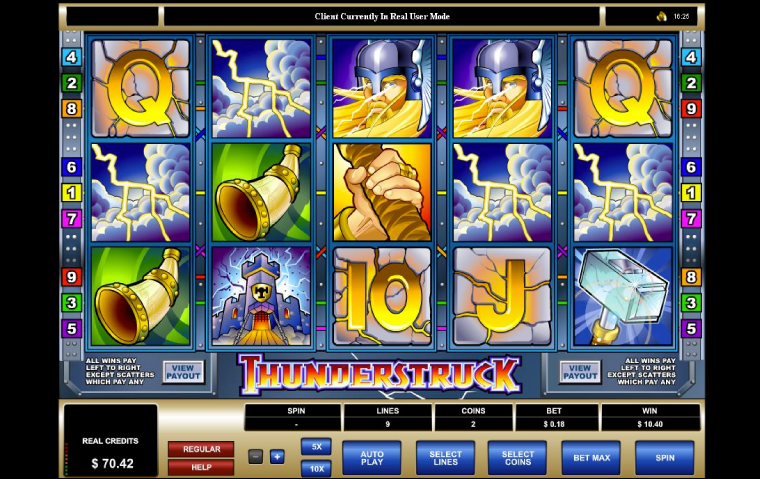 Despite being an older game, the Thunderstruck slot UK has definitely had a few technological updates in its time. Because of this, you can enjoy the Thunderstruck online slot on any device of your choosing including on the go via the mobile slot.

Wagers on the Thunderstruck game can cost as little as 18p per spin all the way up to £90 per spin so you should be able to find the perfect wager for you no matter what your budget is. Despite being an older game, the Thunderstruck slot has a standard RTP of 96% which is great to see. 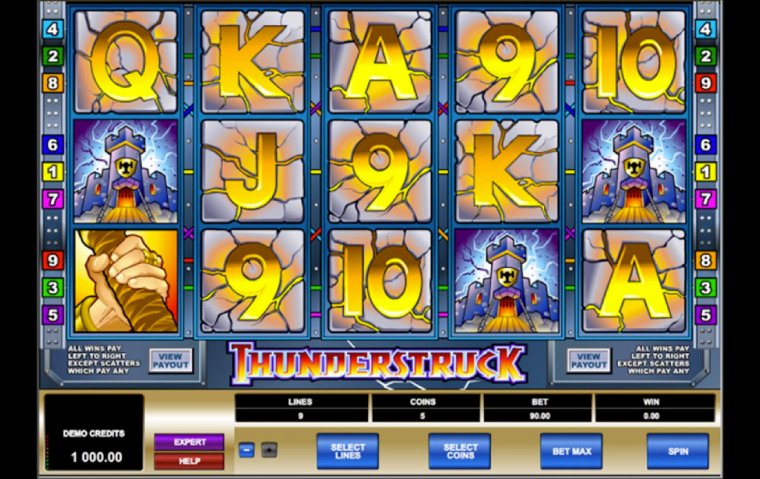 The Ram scatter symbol initiates the free spins bonus round. Players will be rewarded 15 free spins, with all symbol wins during the free spins round being multiplied by 3x.

The powerful thunder god In the Thunderstruck slot game, Thor is the wild symbol. Apart from the scatter symbol, this sign can substitute for any other symbol, and every combination in which it appears will have its value doubled.

A gamble feature is a staple of most older slot machines and the Thunderstruck slot online is definitely no exception. Players can risk their profits at any time for the chance to double or quadruple them. Simply guess the color of the face-down playing card (black or red) to double your wins, and guess the suit to quadruple your winnings (diamonds, hearts, clubs, spades). If you guess incorrectly, you will lose the money you won. You're under no need to utilize the gamble feature if you don't want to; it's all up to you.

You may have heard the phrase ‘an oldie, but a goodie’, and that’s exactly what the Thunderstruck slot is. Sure there aren’t flashy animations or excessive different bonus features, but what there is, is pleasing graphics, straightforward gameplay, and a combination of bonus features that work really well together. To play the Thunderstruck slot machine sign up and play at Slingo.com. Even if you’re not feeling the old-school slot game, when you sign up at Slingo you can explore a whole host of epic slot games, bingo and Slingo titles, table games, and more, so make sure you don’t miss out.