We’re in for an epic fantasy battle in today’s Warlords Crystals of Power online slot review. This video slot from NetEnt has five reels and thirty paylines. Additionally, because it is a 3D game, the aesthetic appeal is well worth examining. Try to catch the entrance sequence at least once; the wolf there appears to be entirely 3D. The entire display resembles a hybrid of a slot machine and a video game. It unmistakably points to developments in the future where games and slots may converge, and developments beyond that where 3D and virtual reality may become features of slots. If all this sounds exciting to you, then keep on reading our Warlords Crystals of Power slot machine review to find out more.

You can instantly see from the production values of the Warlords Crystals of Power slot UK that this is a sizable in-house NetEnt production. There are only the Samurai, the Barbarian, and the Priestess left as warlords in the novel, which takes place after years of conflict on earth. Each wants to acquire all the crystals for themself since they each possess a crystal that gives them power.

There is a lot of interactive play as well as animation. With the  Warlords Crystals of Power Casino slot, NetEnt has pushed the envelope, and it's obvious. The three warlords have colours that match the crystals they each control. In the beautiful intro video, the Samurai, the red warlord, is seen seated at the edge of a room that drops away to reveal a vast universe in the distance. The magnificent-looking wolf brings a red crystal and shoves it in his direction. The Green Warlord is opening the green crystal in the meantime. She is a priestess, and her animal is a glossy black jaguar. The terrifying barbarian, who rides a wild boar with vicious tusks as his mount, also owns the blue crystal. Every warlord has a mask that displays their crystal and colour. All of the gems are placed in gold on the brooch known as the Wild symbol.

The Basics: How to Play Warlords Crystals of Power Online Slot 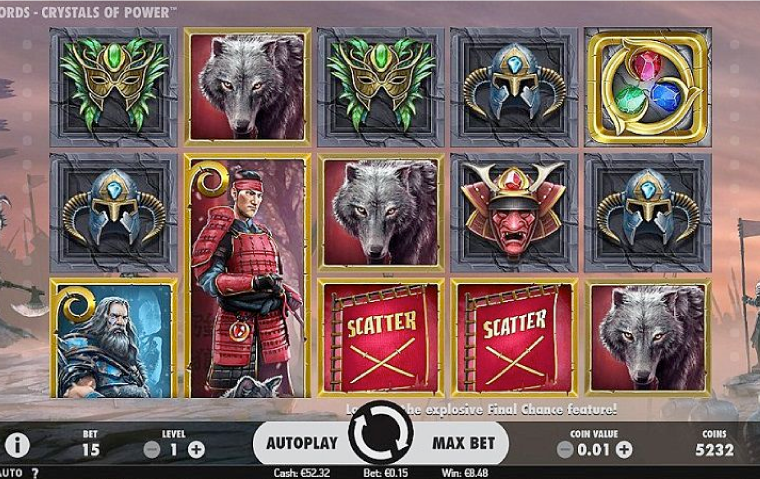 To play the Warlords Crystals of Power slot, load the game at Slingo.com. This can be done on any device you like, and the Warlords Crystals of power casino slot has a great mobile slot for gaming on the go. Next, you’ll need to set your wager. To change your stake, click the "+" or "-" buttons next to the "level" or "currency value" metres. Press the "spin" button in the centre of the control panel when you're ready to start playing. To win a prize or start one of the bonus features, you must match three or more symbols on a payline. For the paytable and rules, tap the I button. When you play for the first time, it is advised that you follow this advice. 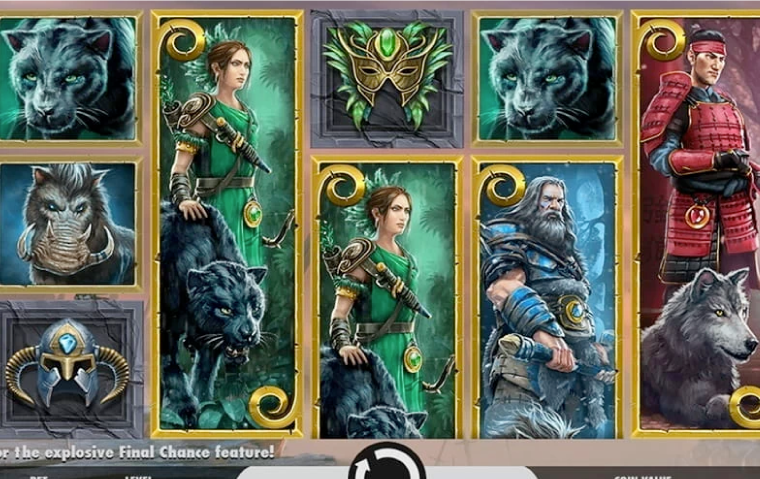 The Warlords Crystals of Power slot bonuses  are as follows:

Both a random overlay wild and a wild symbol can be found in Warlords: Crystals of Power. The primary wild, which doubles as a scatter, is the brooch or clasp, which features all three crystals in a lovely gold setting. Keep in mind that each warlord's scatters are unique.

The Random Overlay wild feature can be triggered on any spin in the main game. In essence, these are three characteristics, each unique to a warlord. A sword feature in "The Samurai" can produce two to five wild symbols on reels 1 to 4. There is an arrow feature in The Priestess that likewise awards two to five wild symbols, but this time, they appear on reels one to five. The hammer feature of The Barbarian can show up on reels 1 to 4.

Be aware that the reels used during free spins and respins are different from those used during basic game spins. Only the same scatter that kicked off the free spins round is present on the free spin reels. Only animal and warrior symbols are present on the reels during the Barbarian free spins, and a new scatter symbol provides three additional free spins. An additional scatter during Priestess free spins raises the multiplier for each scatter by one. Additionally, during Samurai free spins, the scatter transforms into a sticky wild for the entirety of the bonus.

In essence, the warlords feel sorry for you. You receive the Final Chance feature if you had two scatters to begin your respins but another scatter appeared throughout the respins. Either you'll receive a victory that is paid out in coins or another scatter. If it's another scatter, it'll appear at random on reels where there aren't any other scatters. You won't get any more respins after the start of the free spins.

You gain the random win feature if the Final Chance doesn't award you with another scatter. This coin has a value of three to one hundred times your bet.

Well, that was a lot to take in! But, if you’re looking for a slot that plays like a video game, then the Warlords Crystals of Power slot is the one for you. Sign up and play today at Slingo.