Big Time Gaming's White Rabbit slot boasts high volatility gameplay with an RTP of 97.72 percent. There are a total of 248,832 chances to win, including features such as free spins, expanding reels, multipliers, and the Feature Drop feature. It has a top prize of 13000x.

With Big Time Gaming's White Rabbit, get ready for a spectacular online slots adventure. This game offers players over 200 000 distinct chances to win thanks to the MegaWays feature, and the Function Drop feature allows players to customize their gaming experience and increase their overall earning potential with each spin of the reels!

The renowned tale of Alice In Wonderland and its sequel, Through the Looking Glass, penned by Lewis Carroll in 1865, clearly inspired the White Rabbit slot game. Carroll developed a totally fictional world that could only be accessed by falling down the rabbit hole, which is exactly what you'll experience when you play this online slot! When producing the White Rabbit slot online, Big Time Gaming gave special attention to the aesthetics and animations. The reels are set against a stunningly detailed backdrop depicting Wonderland in all of its beauty.

Several well-known figures appear on the reels, including:

The Basics: How to Play White Rabbit Online Slot 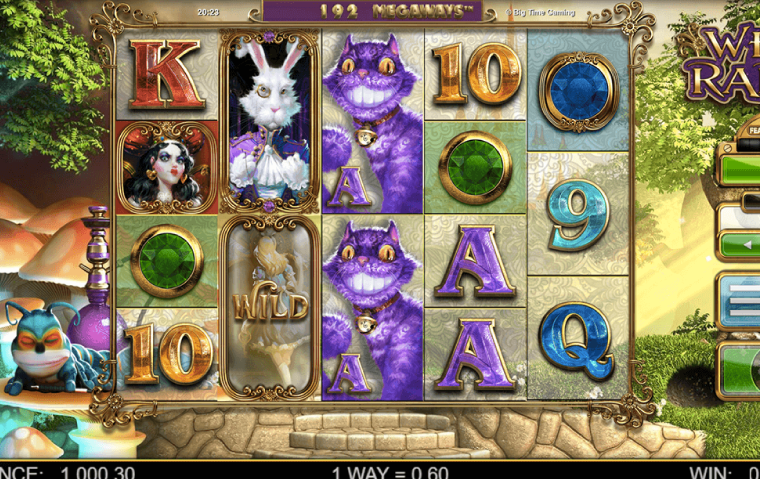 To play the White Rabbit online slot load the game at Slingo.com. This can be done on any device of your choosing including on the go via the mobile slot. To get started with this game, you’ll need to set your wager. The White Rabbit slot UK caters to a wide variety of stake amounts, so finding your perfect wager isn’t too tricky. Once happy with your wager it’s time to spin the reels. The reels will spin and stop at random, and as a Megaways slot winning combinations will be removed from the reels and new combinations will be allowed to fall into place. The total amount won will be an accumulation of all combinations achieved that turn and all payouts will be made in accordance with the paytable.

When the feature drop is added at full price, the RTP of the White Rabbit slot machine is 97.72 percent, and when it is not added at all, it is 97.39 percent. In any case, given the current market average of 96 percent, this is an exceptional return to player, though this does come with a high volatility rating. Wagers on the White Rabbit slot machine start at 10p per spin and can cost a maximum of 20p per spin. 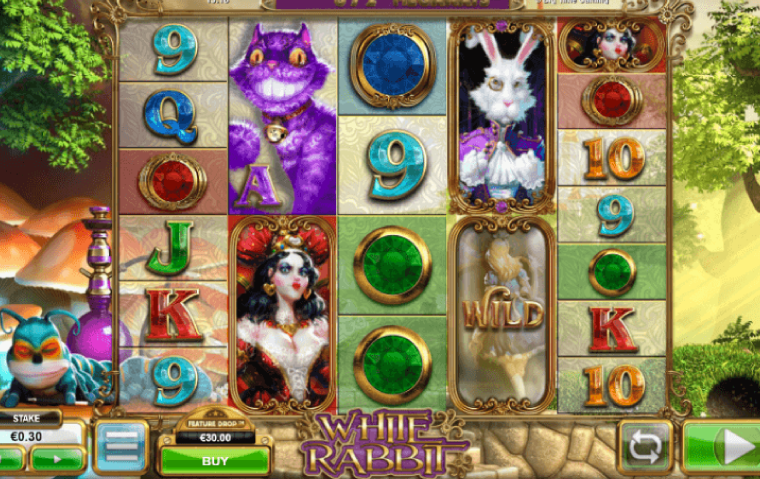 Alice is the wild symbol, and she stands two symbols tall. She can take the place of any other sign on the screen. She appears in all but one of the reels.

You'll notice a button named 'feature drop' on the bottom left-hand side of the screen with 100x your stake on it. The 15 free spin bonus can be triggered at any moment by pressing the button. You can gather gold coins on the reels while you play, which gradually lowers the feature button. If it falls to zero, the White Rabbit slot free spins bonus round will be immediately started.

The caterpillar on the side of the screen can breathe smoke into the reels at any time after any spin, adding anywhere from 1 to 4 extra wilds to the reels. It can also apply a multiplier, the largest of which is 4x, but 2x is the most common.

This bonus can be triggered at any moment by pressing the feature drop button. Alternatively, you can wait for the fabled free spin scatter symbols to appear on reels 2, 3, and 4 to trigger your free spins. In any case, you'll begin with five reels, each of which can hold anywhere from five to seven symbols. If a cupcake appears on one of the reels, it will expand by one symbol, up to a maximum of 12 symbols.

During the White Rabbit free spins bonus, you'll be awarded anywhere from 3 to 12 extra free spins if you earn a 12 symbol reel. More Red Queen symbols (highest payout) and wilds will appear on that reel, making it a 'queen reel.' Even if you don't get to 12 symbols, this feature normally pays approximately 80x to 120x your wager. It's a whole lot more with the queen reels. There are 248,832 ways to win if all five reels are 12 symbols high!

Go down the rabbit hole and play the White Rabbit slot machine at Slingo.com. Sign up and play today to discover more.