The Wolf Hunters slot is an action-packed online slot from Yggdrasil Gaming in which players must save their community from werewolves. Players combat these dreadful beasts in this 20-payline game, with the possibility to win huge prizes if they triumph.

The Wolf Hunters slot game from Yggdrasil Gaming is an action-packed online slot in which players must safeguard their community from werewolves. The hamlet is being terrorised by a fearsome beast in the Wolf Hunter slot UK, so it's time to call in the Wolf Hunters! So arm yourself and prepare to fight for massive prizes with Wild Respins and Collectible Free Spins! Wolf Hunters is a 5-reel, 3-row video slot by Yggdrasil Gaming with 20 fixed paylines. The game has a dark Immortal Romance feel to it, with a backdrop of a dark Transylvanian style castle. The plot revolves around the Hunter and Huntress, two mysterious individuals sent out to fight werewolves.

The Wolf Hunters slot machine is one of the most visually appealing slot machines available. The plot is set against a misty moonlit evening with creepy/haunted buildings in the background, with the notion being that night has fallen and a dreadful beast is terrorising the town, and the Wolf Hunters are asked to join the fight.

Blue diamonds, green clubs, purple spades, and scarlet hearts (all set on a wooden panel) are among the symbols on the reels, which also contain stakes (to kill the werewolves), monster traps, poison bottles, and the terrible werewolf himself. There's also a wild symbol that can replace all symbols save the scatters, and landing one will offer you a respin with all wilds in place.

When the werewolf symbol appears, which is the highest paying symbol and appears on all reels, a random werewolf hunter tries to hit it. The werewolf symbol changes into a sticky wild and provides you one free respin if they succeed - this is known as The Werewolf feature - but more on this later!

The Basics: How to Play Wolf Hunters Online Slot 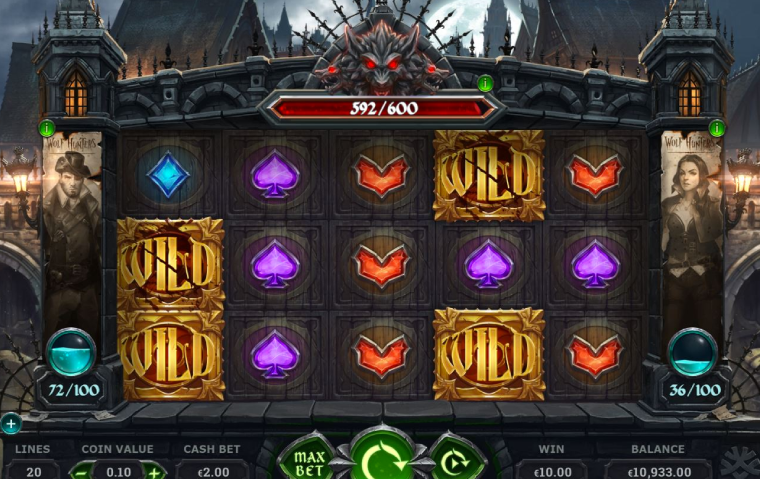 Load the Wolf Hunter slot game at Slingo.com to play it online. The Wolf Hunter slot online game is fully suited for play on all devices, including the Wolf Hunter mobile slot, which can be played on the move. You'll need to set your wager after you've loaded the game onto your smartphone. You can begin playing the game once you're pleased with your wager. To start the reels spinning, press the spin button. After that, the reels will spin and stop at random. The winning combinations will be highlighted once they've come to a halt. These are made up of three or more matching symbols on a payline that is active. The paytable will decide the payout value.

The Wolf Hunter slot machine has a theoretical return to player (RTP) of 96.3% and has a medium volatility rating. Wagers on this game start at just 20p per spin, but can also cost up to £100 per spin if you have the budget for it. 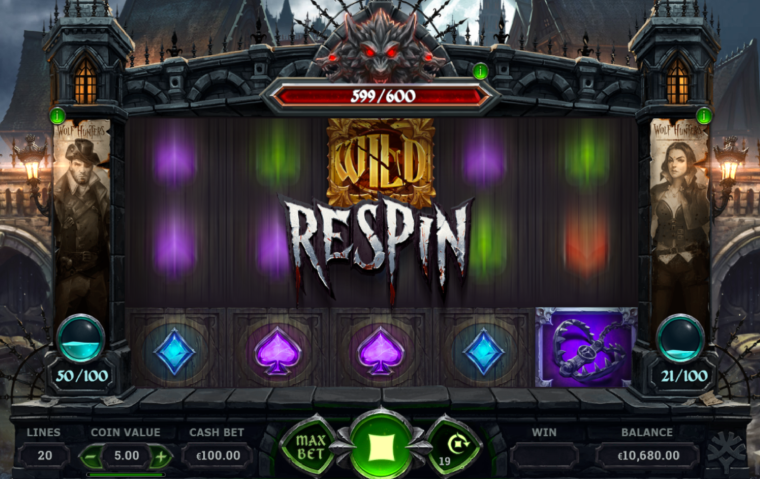 When the Werewolf appears on the reels in the base game, one random hunter attempts to attack it. If the hunter succeeds, he or she gains an additional +1 Rage point. Rage Free Spin mode is enabled when either hunter accumulates 100 rage points. When the game first loads, a random hunter will receive X free anger points.

Wilds can appear in both the regular game and the Free Spins mode. Every time wilds appear on the reels, the reels respin, and all wilds remain sticky. Wilds take the place of all other symbols.

There are three different types of free spin modes in Wolf Hunters. In all Free Spin settings, both hunters can attack each Werewolf symbol (if available on the reels). When a Werewolf symbol appears, one hunter attempts it first, and if that fails, the second hunter enters for a second chance. Landing two Free Spin Symbols in Free Spin mode awards two additional Free Spins.

Get ready because the Wolf Hunter slot game has a lot of free spins bonuses to play!

If you have the urge to save the village then play Wold Hunters today at Slingo.com. Sign up and play today!