If you've ever played slot machines, you've certainly heard of WMS's Zeus slot, which is the granddaddy of all Greek-themed games. The Zeus slot UK, which is over 7 years old, is still a gaming mainstay, with a wild symbol and a free spins bonus round where you may win up to 100 free spins! The Zeus slot online offers a theoretical return to player (RTP) of 95.97 percent and is played at medium volatility.

The Zeus slot machine is a classic from WMS, a well-known producer. It's safe to say that this title is as old as the gods themselves when it comes to video slots, having been released in 2013. It has received a few upgrades since then to keep it up to current with the times, but some of the images and pictures still have a retro feel to them.

The Zeus online slot is still popular today, thanks to its classic theme, reputation at land-based casinos, and strong design, which includes decently paying symbols, a wild symbol, and a free spins round.

The Basics: How to Play Zeus Online Slot 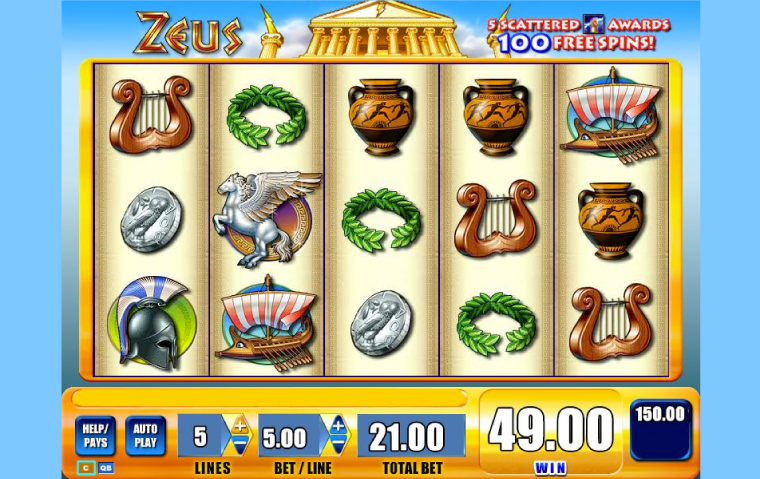 While the Zeus slot game tells a complicated story about Greek myths, getting started with the Zeus slot as a player, whether on a desktop or mobile device via the mobile slot, couldn't be simpler. The Zeus slot machine has a standard 5x3 layout with up to 30 pay lines. The most difficult aspect of placing a bet on the Zeus slot is determining the number of pay lines you want to play. There is a range of wagering possibilities, and you can play with as few as one pay line or all 30. Unlike regular slots, where your stake is presented in coins, the Zeus slot displays your wager in your preferred currency.

Once you've decided on your stake amount, all you have to do now is click the spin button to get started. The reels will spin and stop at random, and winning combinations are formed by landing three or more matching symbols across an active pay line starting from the left-most reel. All payouts will be made in accordance with the paytable, and once you’ve been credited with any winnings you’ve earned, you can spin again.

Wagers on the Zeus slot game start at just 30p per spin, but if you prefer paying up to max out your slot experience you can also wager up to £150 per spin. As an older slot, it’s expected that the Zeus slot will have a slightly lower RTP than the modern norm but at 95.97%, it’s really not all that far off. 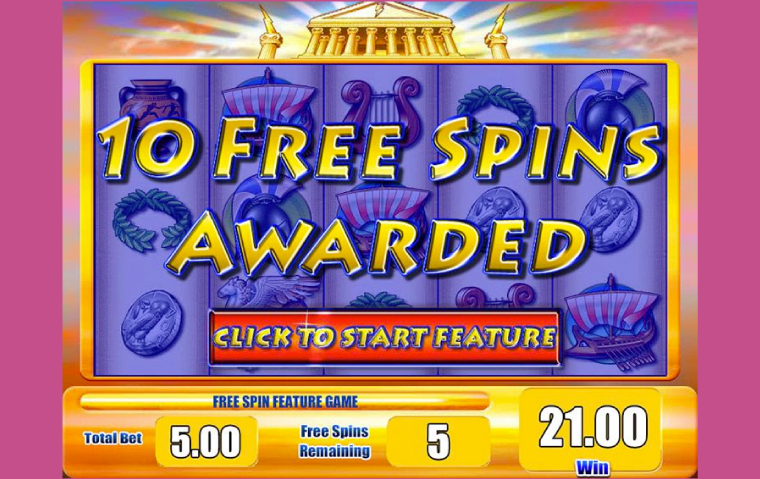 The feature sign is Zeus' hand wielding a thunderbolt, as he is frequently depicted within Greek mythology. Free spins are awarded when three or more scatter symbols appear anywhere on the reels in a single spin. You will receive 10 free spins if you land three scatters, and 25 free spins if you land four scatters. If you can get 5 scatters on the reels, the real party begins because you'll be awarded a whopping 100 free spins! Even better, the free spins feature can be retriggered throughout the free spins, so you could end up with a lot of free spins.

While brand new slot releases do have their appeal, they’re often a flash in the pan and do not stick around long. It takes a really well-designed slot machine to have players returning again and again, even more so after years. The Zeus slot machine has been able to achieve this epic feat thanks to its great symbol payouts, plus its cohesive bonus features. To play the Zeus slot, as well as loads of other slot games, bingo games, Slingo titles, casino games, and more, sign up and play today at Slingo.com.