In the words of Andy Williams, Christmas is the ‘Most Wonderful Time of the Year’ and as it fast approaches, it's only fitting that we start the festive season off with the perfect playlist.

There’s nothing quite like a good Christmas song to get you in the holiday spirit. That’s why to help you get into the merry mood, the online bingo experts at Slingo explored the best Christmas songs of all time to determine the ultimate seasonal playlist of the year.

The Most Popular Christmas Songs on Spotify 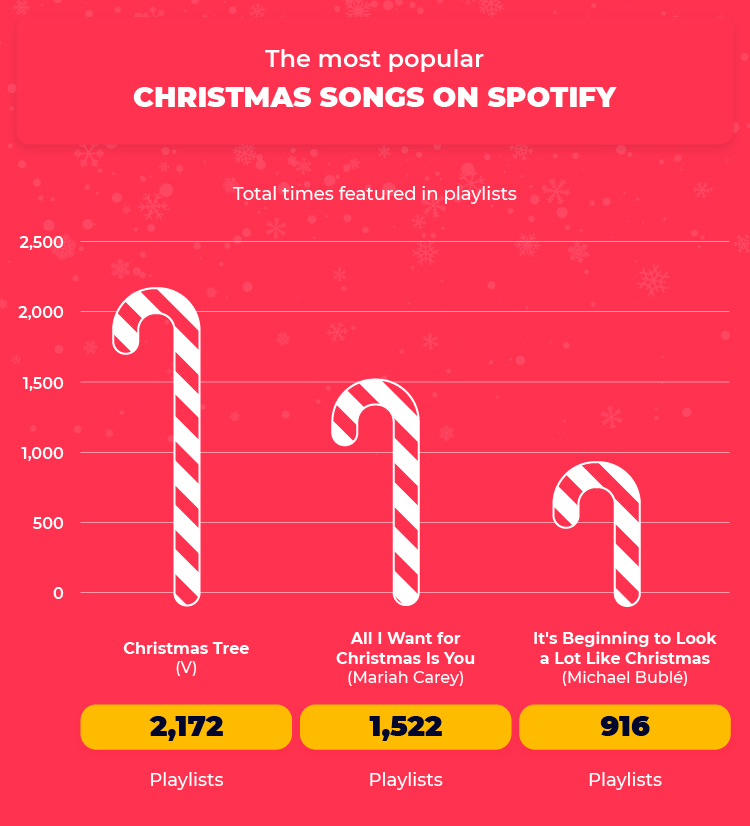 To our surprise, the queen of Christmas hits was dethroned by none other than a member of one of the most popular boy bands in the world. BTS vocalist V took the world by storm with his hit single ‘Christmas Tree’. The song was so popular on Spotify that it featured in an impressive 2,172 playlists.

Although this infamous festive tune didn’t quite make it to the top spot as 2022’s most popular Christmas song, it's clear that it still holds a significant place in the hearts of its listeners. In fact, so much so that it appeared on over 1.5k Spotify playlists.

3. It's Beginning to Look a Lot Like Christmas (Michael Bublé) - 916 playlists

This epic Christmas classic takes third place, featuring in over 900 playlists. Though first written in 1951 by Meredith Wilson, it seems like Micheal Bublé’s modern spin on the popular tune has become a seasonal favourite for almost 1k Spotify subscribers. 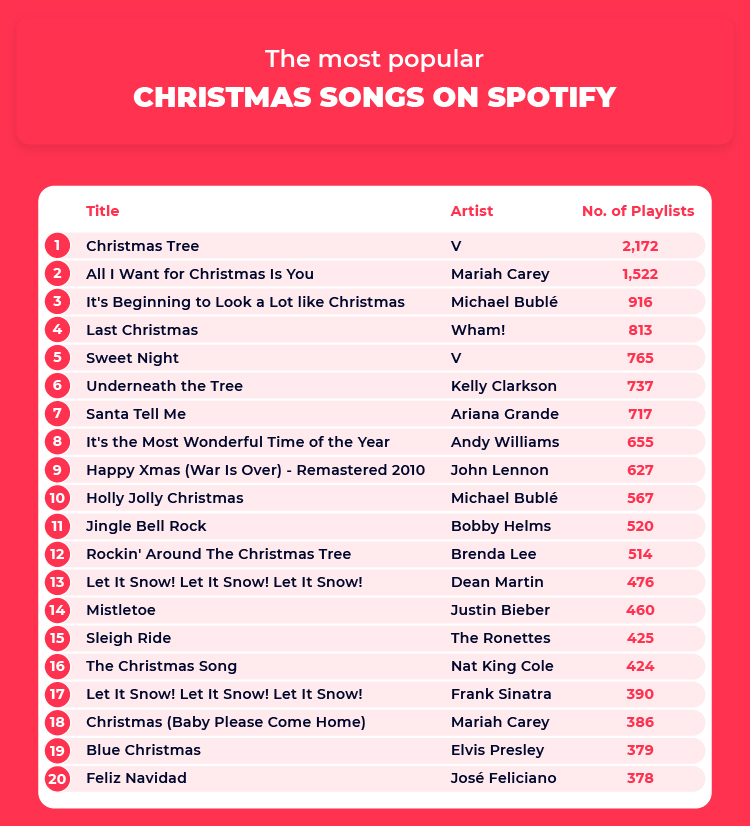 The Most Popular Religious Christmas Songs 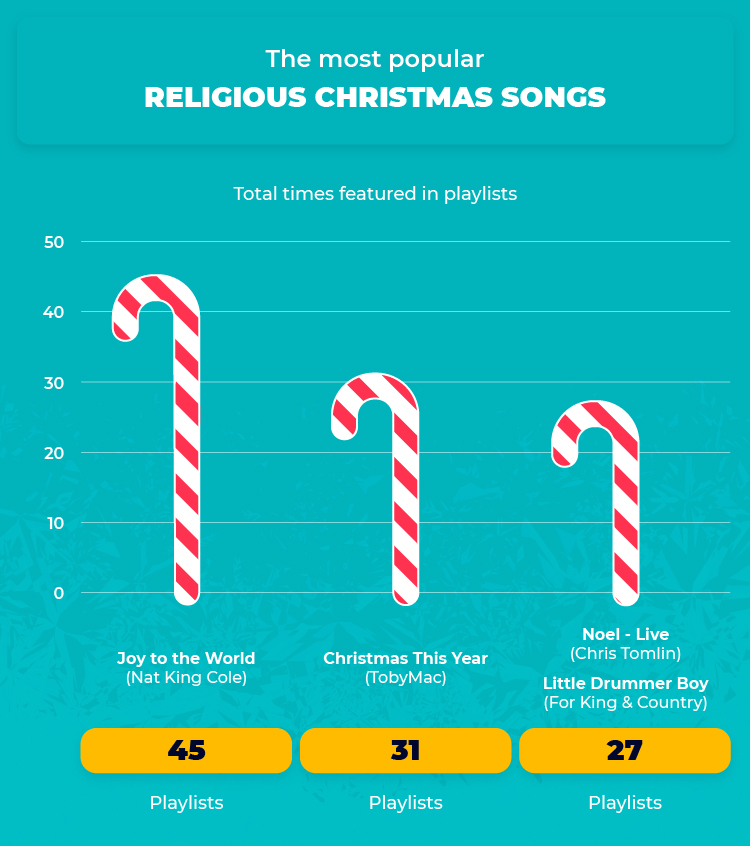 For Christians, the festive season largely revolves around the birth of Jesus. Therefore, when it comes to the top Christmas carol, ‘Joy to the World’ takes the cake appearing in 45 playlists across Spotify as the top religious Christmas song.

This Christain pop song takes second place with features in over 30 playlists. Not only do its lyrics showcase the joy of the Christmas season but its upbeat tone makes it perfect for the holiday season.

Featuring in just less than 30 Christmas playlists, it’s clear that the contemporary Christain-inspired song contains many religious connotations. Deriving from the Latin verb nasci, meaning “to be born,” Noel was written to celebrate the birth of Jesus.

This hard-hitting rendition of the ‘Little Drummer Boy’ by the Grammy Award winners, For King & Country also earned a well-deserved spot on the podium. Coming in third place, this cheerful tune features in 27 playlists on Spotify. 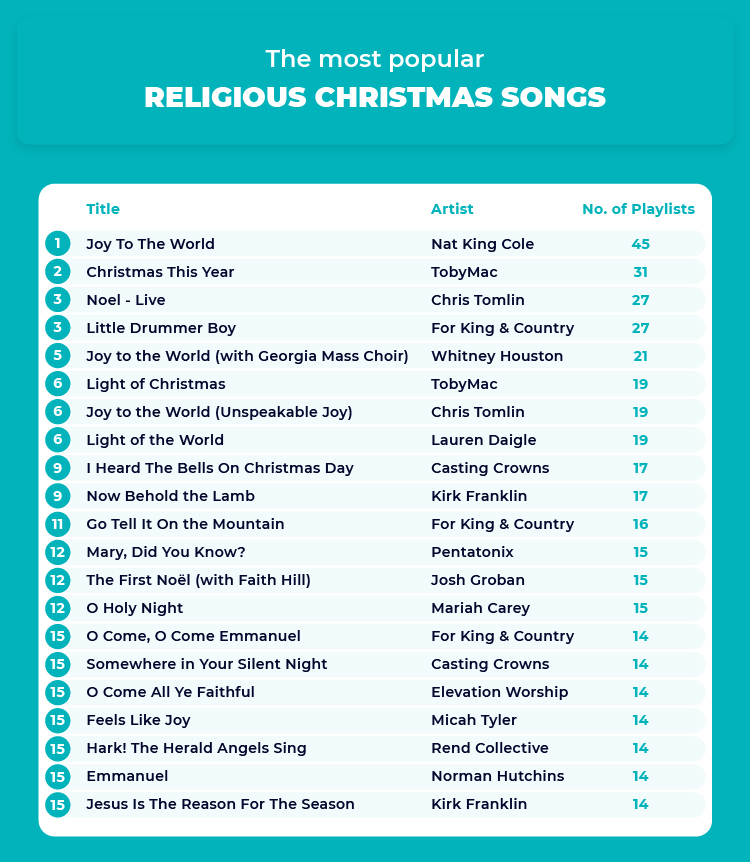 The Christmas Tracks with the Highest Average BPM 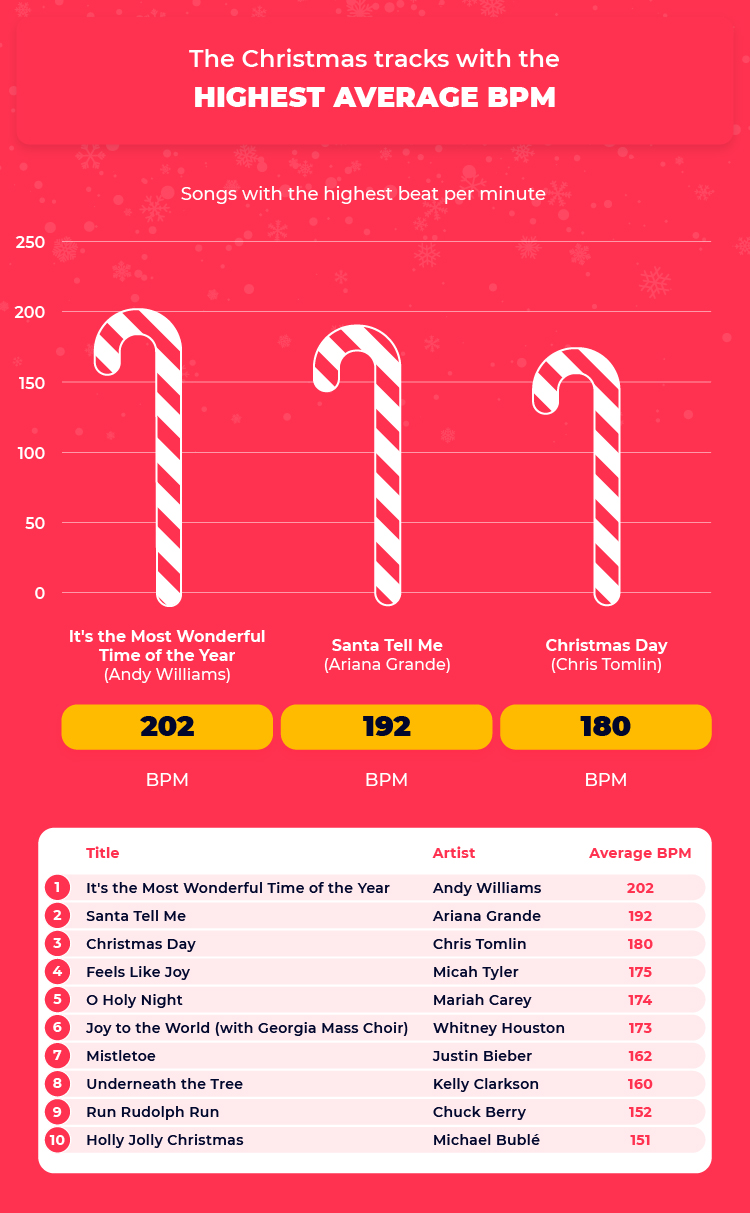 When it comes to what makes a great seasonal song it is so easy to get hooked on the lyrics that we forget its beat per minute (BPM). Well, for this classic song not only does its 202 BPM set it at the top of the list but it has proven to be an infectious seasonal staple on every top-notch Christmas playlist.

This 2014 R&B track seems to have caught the attention of its modern audience as it takes second place on the list with an average BPM of 192. With its catchy tune, it’s no surprise that this song is ranked so highly on the list.

Chris Tomlin's song, ‘Christmas Day’ completes the top three with an average BPM of 180. Not only does the song have a high BPM but its focus on the joy of Christmas really does make it worth listening to!

The Most Common Words in the Title 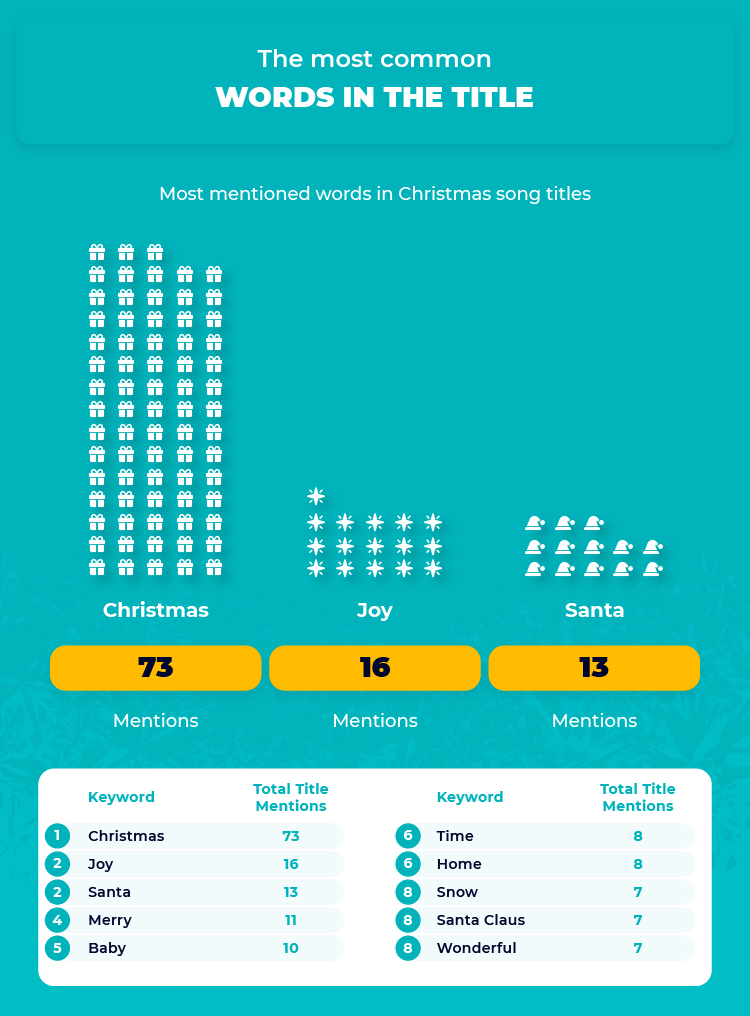 To nobody’s surprise, the most common word that appears in many Christmas song titles is the word ‘Christmas’ itself. With over 70 mentions of the word in more than 250 seasonal songs, Christmas takes the top spot.

Following behind is the word ‘joy’ with just under 20 mentions. Though more commonly used in religious Christmas song titles, the word truly sparks a sense of joy amongst its listeners, hence its second-place position.

Though his existence can be traced back hundreds of years ago, there is no doubt that the guy in the big red suit is still very much a significant part of Christmas today. It’s therefore no surprise that the word ‘Santa’ is mentioned 13 times across various Christmas titles. 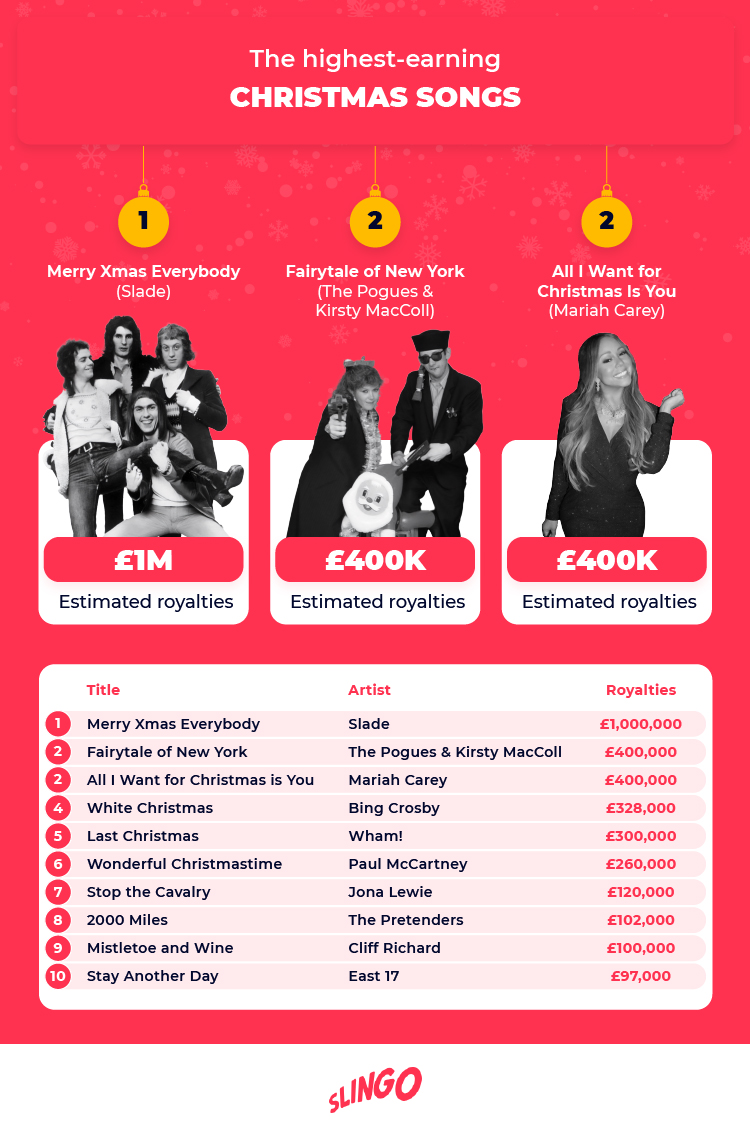 Slade’s iconic festive hit grabs top spot as the Christmas hit that earns the most in royalties at this time of the year. It is estimated that on average the 70’s rock band receives a lovely payout of a whopping £1 million.

Nearly 35 years on, this Irish folk-style ballad still reigns supreme every year at Christmas. Upon its release, this song became an instant hit, spending a comfortable five weeks at number one on the Irish charts. Therefore, it's no wonder it’s still one of the highest-earning festive tunes today, making around £400k each year.

Although it is the most recent holiday hit on the top three list, this festive tune is also estimated to make around 400k every year. This is not much of a surprise considering that it has become a staple on every Christmas playlist.

All songs were taken from the 100 most frequently featured Christmas songs on various Spotify playlists using a Playlist Miner.

To get a more diverse set of playlists, different search terms were used for each search e.g. 'most popular' or 'religious' Christmas songs.

Each list also compiles and ranks the top 20 songs for its specific search term along with the Average BPM of the top songs on that list.

All data for the highest-earning Christmas songs were taken from the Independent.

Luxury Hotels Norfolk Has To Offer