4.4Rating
Ready to journey into outer space? Starburst will take you on an intergalactic adventure to find beautiful jewels that are out of this world! This cosmic extravaganza features crystal-clear graphics and a twinkling soundtrack that will make you feel like you’re on another planet. What treasures will you find as you blast off into space? Play Starburst now to find out! 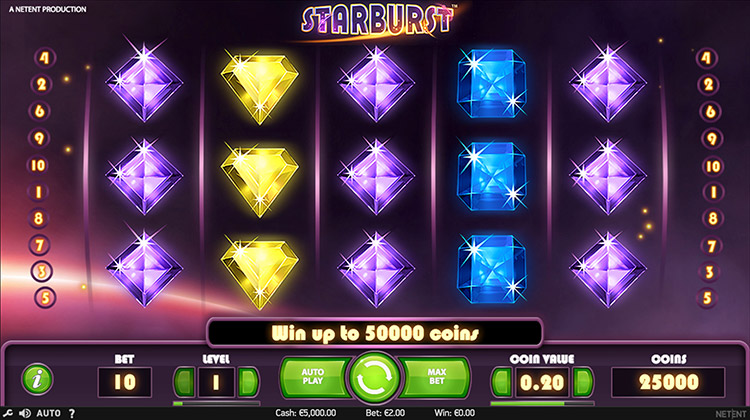 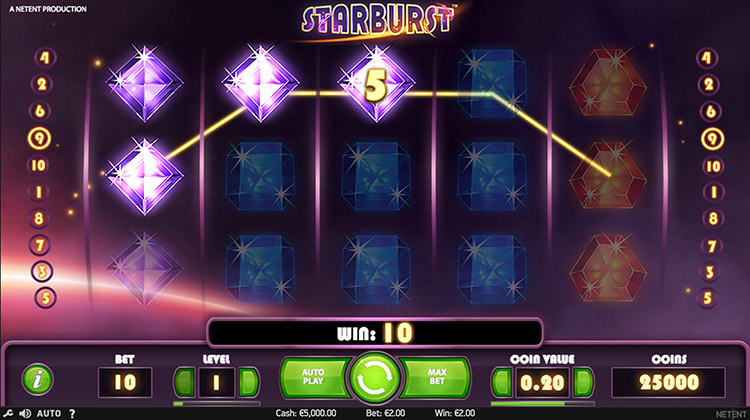 The Starburst game was created in 2012 by leading online games company NetEnt. Its simple format, incredible graphics and high-energy gameplay have been delighting users ever since, and Starburst is one of the most popular online slots in the UK.

As if the beautiful jewels weren’t mesmerising enough, this classic slot features Starburst Wilds which expand across the full reel in a fantastic visual display. All you have to do is spin the reels in this easy-to-understand slot to be in with a chance of winning big.

Starburst is fully optimised for desktop and mobile use, so you can play whenever and wherever the mood takes you. Are you ready for lift off?

How to Play Starburst Online

It’s easy to get the hang of playing Starburst online. As with all slots games, first you need to decide your stake. Set your bet amount, number of lines and coin size using the left and right arrows on the screen. Once you’ve done that, the fun really begins!

Starburst is a five-reel, three-row slot game with a host of shiny symbols. The aim is to land the same symbols on reels that are next to each other and win real money prizes. With ten paylines that work both ways, this makes for an exhilarating experience!

To begin, hit SPIN to take you to dizzying heights. If you’d rather sit back, relax and enjoy the view from above, you can use the game’s handy AUTOPLAY button to let Starburst’s futuristic technology spin the reels for you.

Things really start to get explosive when the Wilds – represented by a stunning rainbow coloured jewel – appear on reels 2, 3 and 4. This gemstone has the power to expand across the whole reel, replacing all other symbols and remaining there while the other reels spin again.

If another Wild appears during the re-spin, it will expand and remain just like the first one, giving you another round of free spins!

Landing blocks of symbols, for example 9 symbols in a triangle from the top or bottom corners, can also win you real money prizes. Since the paylines work both ways on Planet Starburst, winning symbols can go from left to right or from right to left, giving you even more chances to win!

However, before you blast off into space it’s important to familiarise yourself with all of the weird and wonderful symbols and features you’ll come across on your voyage.

The highest-paying symbol is the gold bar – this classic slots symbol has been given a futuristic makeover with a ringed planet. If you’re lucky enough to match these symbols, you could be in for a big win!

Another classic fruit machine symbol, the Lucky Seven, is the next highest-paying symbol.

After that comes the mystical coloured jewels, which are so realistic you’ll feel like you can almost touch them! The five jewels are coloured blue, green, yellow and orange in ascending order of value.

The stunning multicoloured, star-shaped symbol is – you’ve guessed it – the Starburst! It’s the Wild of the game, and when it’s activated it will expand across the whole reel in an unstoppable burst of cosmic energy!

Another amazing feature of Starburst is Win Both Ways. It means you can get a winning combination from left to right and vice versa. This ups your chances of winning and adds a whole new dimension to the traditional slots format!

Q: Are there any Wilds?
A: Yes! The Starburst symbol acts as the Wild. When activated, it expands across the whole reel, replacing all other symbols and remaining there while the other reels spin again.

Q: Can I play Starburst on my mobile?
A: Of course! All of our games are fully optimised for both mobile and desktop use, meaning you can play wherever and whenever you feel like it.