The Most Successful Dating Shows

Dating shows have swept the nation over the last few years, but which ones are successful in helping people find love?

We will create a list of the top dating shows on UK television over the last couple of years and look at how many couples were created on the show, vs how many have stayed together, for how long and how many marriages each show has.

A topical, evergreen campaign that we can continue to update as more seasons of dating shows are released.

The dating shows with the highest chance of finding relationship

Can you really find love on a dating show? Turns out, sometimes you can. Although it might seem like dating shows are losing their true meaning and becoming more about building your Instagram following or launching a clothing line than finding love, it isn’t totally impossible to turn a reality show romance into marriage.

Finding ‘the one’ on TV might have more to do with the show you choose than you might think. We ranked 10 of the UK’s favourite dating shows to find which one is the most successful for finding love.

The most successful dating shows 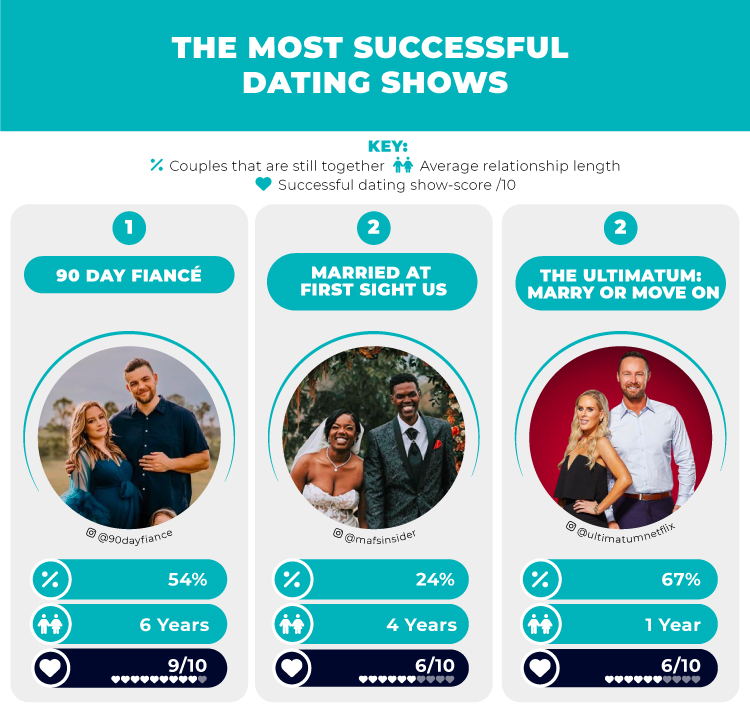 The show that gave us unforgettable couples like Danielle and Mohamed and Angela and Michael is known for providing guaranteed drama and endless entertainment.

90 Day Fiancé follows couples completing the K-1 visa process, also known as the fiancé visa, which lets Americans bring their engaged partner to the States for 90 days. Each couple has exactly 90 days to live together, and if the couple decides not to marry the fiancé must return to their native country.

The original 90 Day Fiancé series, not including any of the spinoff series, has a 54% success rate for couples featured on the show that are still together today. All of the surviving couples are married, given that the K-1 visa requires couples to legally marry before the 90 days are up. The average relationship length is six years.

The UK version of Married at First Sight returned to our screens this August and had everyone hooked, but the US version of the dating show is officially more successful in terms of helping contestants find love.

The show follows couples who are scientifically matched by an expert panel based on their desired partner traits and agree to marry upon their first meeting. By the end of the season, the couples can choose to confirm their vows or part ways. Due to a technicality, the weddings on the show are not always legally binding.

The Ultimatum: Marry or Move On premiered this year on Netflix, therefore the show has only one season, with six couples.

The show follows couples where one person has issued their partner with an ‘ultimatum’ to get married or break up for good. The couples swap partners and live with a new boyfriend or girlfriend for three weeks, before deciding whether to tie the knot with their original partner or walk away from the relationship.

Of the couples that appeared on the show, 67% are still together, with 33% of all couples currently married. 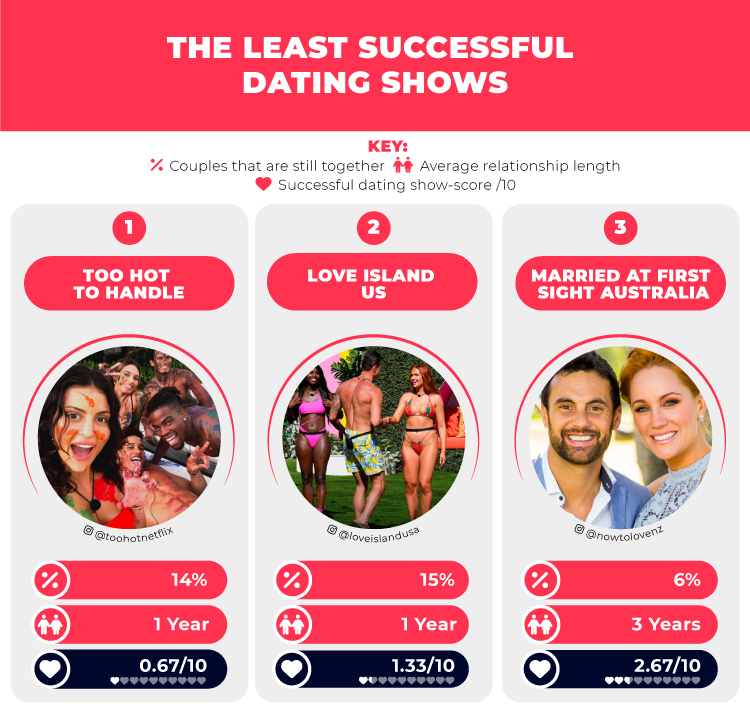 Netflix’s Too Hot to Handle is a show based on lust over love, where contestants are forbidden from any kind of kissing or touching. If they cave in, the group prize money is reduced.

With three seasons Too Hot to Handle has produced 14 couples, of which just 14% are still together today. The average relationship length of the surviving couples is one year, and none have tied the knot.

Love Island is one of the most-watched dating shows, and the US version premiered in 2019.

Love Island US has had four seasons in total and helped form 26 relationships. Just 15% of the couples that left the villa and pursued a relationship are still together, and no couples from the show have gotten married.

While the US version of Married at First Sight ranks in our top three most successful dating shows, the Australian series has been less effective at fostering lasting romance. The show that matches strangers looking for love who agree to marry each other upon first sight has had nine seasons, featuring 82 couples.

Just 6% of couples from Married at First Sight Australia are still together today and 2% of all couples featured on the show are legally married. 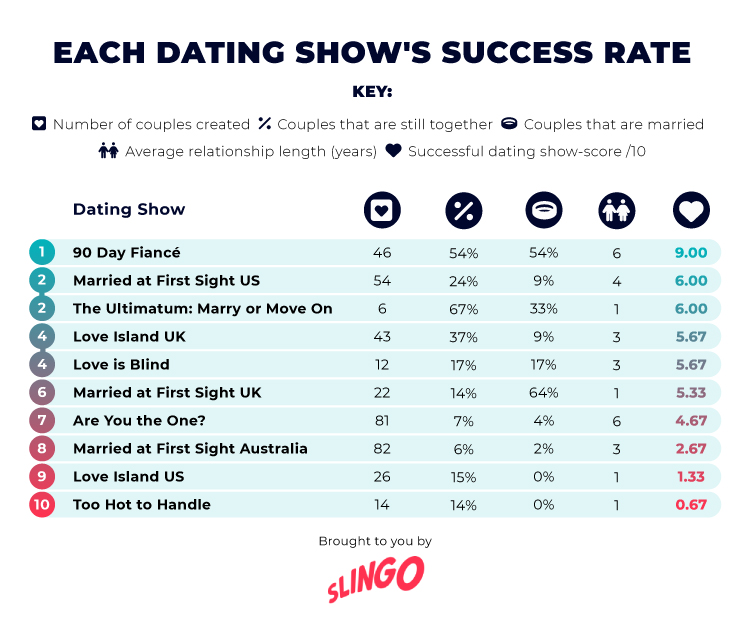 To find the most successful dating shows, we looked at 10 of the most popular dating reality shows sourced from Ranker. We only looked at shows that are still airing or have scheduled upcoming episodes.

We ranked each show based on the following criteria, giving each show a normalised score out of 10 for each factor before calculating an average score (Successful Dating Show-Score) across all factors.

We sourced the number of couples created on each show from websites including ScreenRant, Bustle, Wikipedia and Heart. We only counted couples who left the show together or were matched up by producers. We looked at all couples from each show, including couples who starred in different seasons.