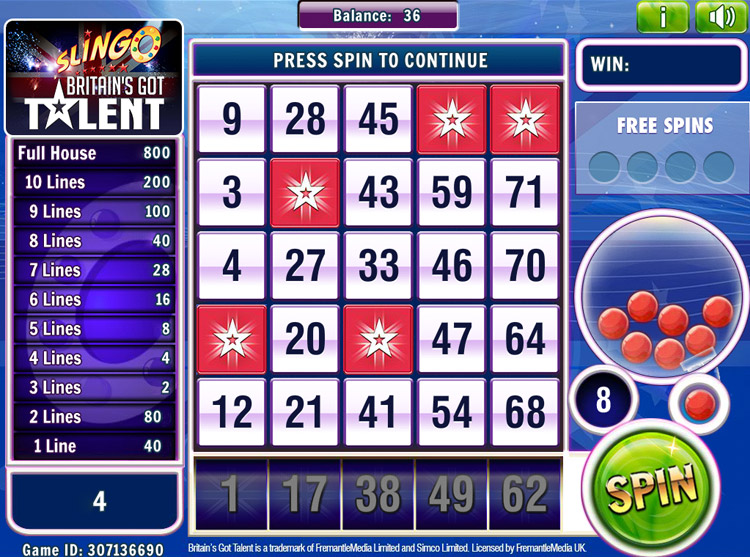 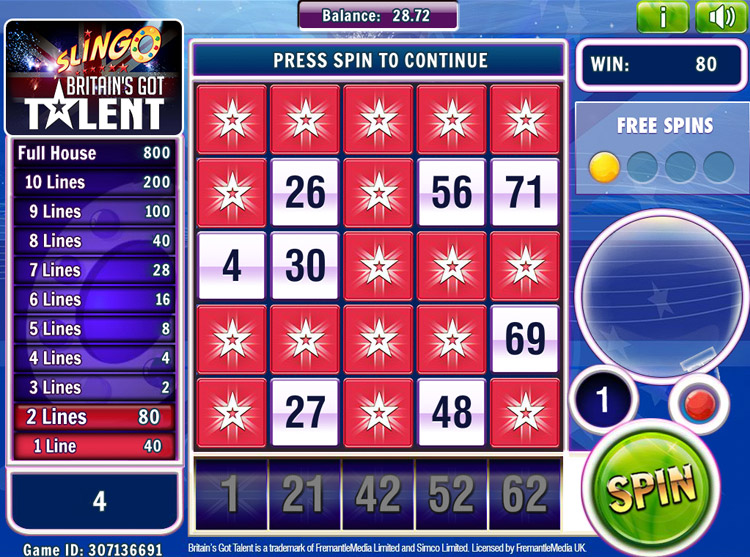 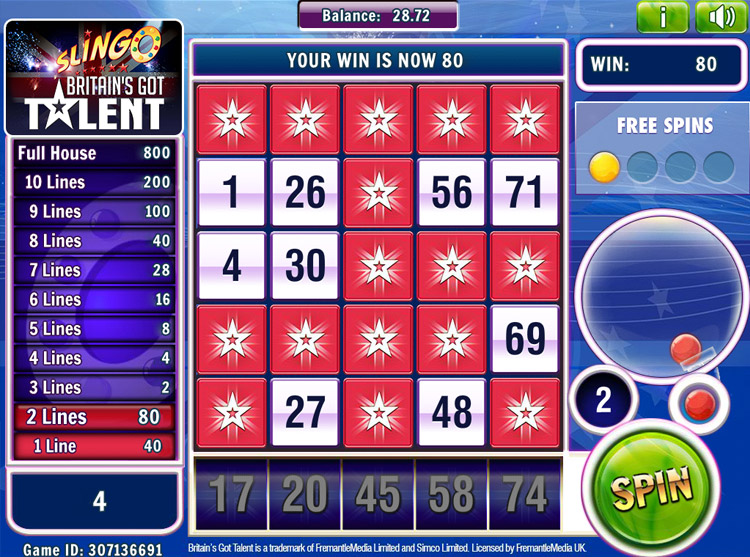 If you love nothing better than catching up with BGT on a Saturday night, you’ll love this exciting Slingo slot. Match the numbers on the reels to the grid above and watch as the corresponding numbers are replaced by the iconic Britain's Got Talent star logo. This slot has the potential for superstar wins, with a jackpot of up to £20,000 up for grabs. The cash prize increases with every win, with Super Jokers and bonus coins thrown in for an unforgettable performance!

How to Play Slingo Britain’s Got Talent Slot Online

Playing the Slingo Britain’s Got Talent game is easy! Start by setting your stake using the + / - buttons in the bottom left corner of the game screen. When you’re ready for your big moment hit ‘START GAME’ to begin!

Each of your initial 11 spins places five numbers/symbols in the reel below your grid. If any of the numbers in the columns above match the number below it on the reel, the number will be marked off with the iconic BGT star!

Five marked off numbers next to each other (vertically, horizontally or diagonally) creates a Slingo. Each completed Slingo moves you up a place on the prize multiplier bar to the left of your screen. Winning a full house (marking off every number on the grid) will win you a showstopping 200x your original bet!

There are also some familiar Slingo characters to help you land winning combinations – you can read about them in the next section ‘Slingo Britain’s Got Talent Characters and Features’!

After your first 11 spins, you'll be able to carry on playing if you accumulated any Free Spins or by buying extra spins, the unique cost of which is displayed on the spin button for each individual spin.

Slingo Britain’s Got Talent online is set on a bright blue background with a cheerful starry design and a BGT Union Jack logo with a fun Slingo twist. However, before you start playing you’ll need to familarise yourself with some of the key characters and symbols you’ll meet along the way.

For those of you who are already familiar with Slingo games, you’ll already recognise some of the characters.

There’s also a Free Spin symbol which will give you a free spin at the end of the game. Watch out for the angry-looking devil, though – he’ll try to block you from making winning combinations!