4.4Rating
Red Hot Slingo is a fast, fun and exciting Slingo game with some sizzlin’ cash prizes up for grabs! Complete Slingos to work your way up the pay ladder, or find fruity symbols on the reels to win an instant cash prize. With its unique blend of the Slingo style crossed with fruit machine fun, you’ll love this fiery new game. Ready to turn up the heat? Play Red Hot Slingo now! 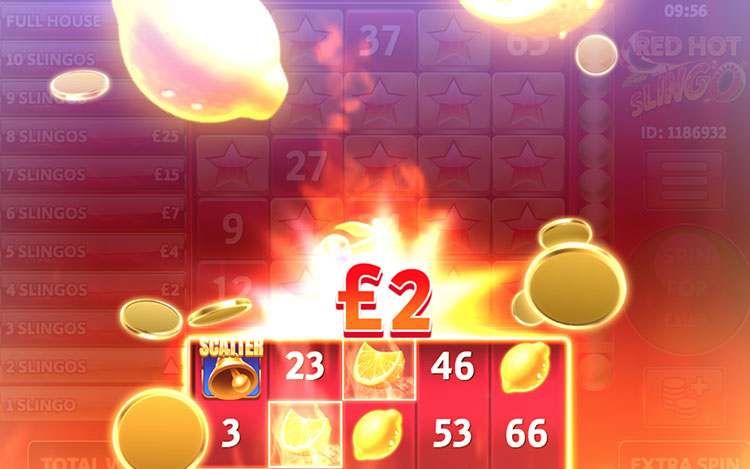 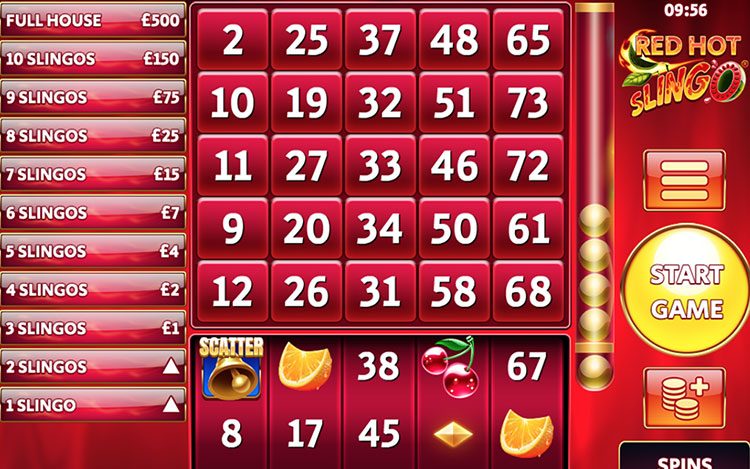 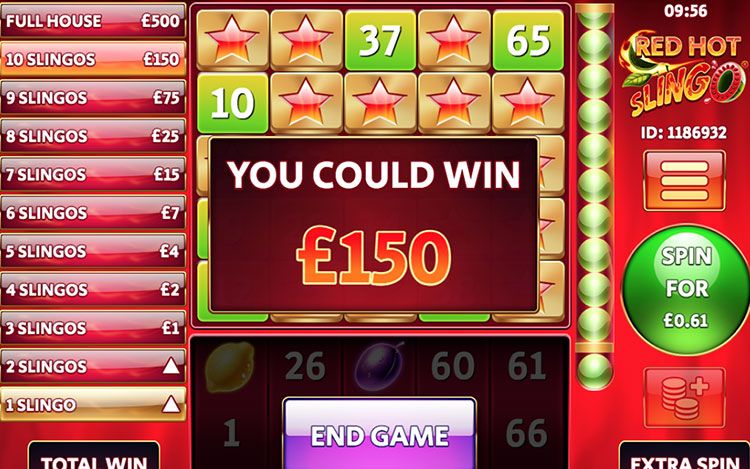 Get ready to spice up your life with Red Hot Slingo, the exciting new Slingo game with a fruity, fiery theme and an original Slingo twist! Just like in other Slingo games, you’ll match up numbers on the reels with those on the grid to complete Slingos and move your way up the pay ladder – hopefully all the way up to a Full House.

But this time there’s an exciting twist – instead of just one reel below the 5x5 Slingo grid, there are three. The reels are filled with a combination of numbers and fruity symbols like oranges, cherries and plums. Land at least three matching symbols on a win line to be rewarded with an instant cash prize!

Wilds and Super Wilds help you complete Slingos, and there’s even a diamond-shaped blocker to try to do the opposite! Free spins are also up for grabs, as well as the chance to buy extra spins at the end of the game. Can you handle the heat? Play Red Hot Slingo now to find out!

Like all Slingo games, you’ll need to decide on your stake before you start playing Red Hot Slingo online. Adjust it by clicking on the coins symbol underneath the START GAME button.

The reels will spin automatically and each game consists of five spins (not including any free spins or extra spins).

The aim of the game is to match numbers on the reels at the bottom of the screen with those on the grid. You can see the number of spins you have left in the red SPINS box.

You’ll win a Slingo for marking off five numbers on one of 12 win lines. With each Slingo you win, you’ll progress further up the win ladder on the left.

Wilds and Super Wilds help you mark off numbers on the grid, and Free Spins symbols award you an extra spin at the end of the game. There are also diamond-shaped blockers that try to stop you completing Slingos, so watch out!

In addition, this time there’s a fruity twist to give you even more chances to win a prize. Match at least three of the same fruity symbols on a win line in the reels below the grid to win an instant cash prize. There’s also a Scatter symbol, which awards a prize for three matching symbols anywhere on the reels.

At the end of the game you can choose to collect any winnings, or buy more spins to carry on the fun.

The Red Hot Slingo game takes place against a fiery red backdrop, and the game has a retro design inspired by classic fruit machines. However, before you start playing you’ll need to familiarise yourself with some of the key symbols and features you’ll come across during the game.

There’s also a Free Spin symbol that can award you an extra spin at the end of the game. Watch out for the diamond-shaped blockers – they’ll block a reel space to try to prevent you from landing wins.

Now for the fruity symbols: the highest paying symbol is the juicy watermelon, which pays 100x your original stake for five matching symbols on a win line. There’s also a Scatter (represented by a gold bell), which pays anywhere in view. Find five of them on the reels to win 100x your bet!

The Wild is also worth up to 100x, and it substitutes for all other symbols except the Scatter.