4.1Rating
Slingo Rakin’ Bacon is a fast, fun and exciting Slingo game that gives popular slot game Rakin’ Bacon a cheeky Slingo twist! Complete Slingos on the grid to work your way up the pay ladder and get a chance to win cash prizes or free spins. And with four fabulous jackpots up for grabs, you’ve got it all to play for in Slingo Rakin’ Bacon. Ready for an oink-credible gaming experience? Play Slingo Rakin’ Bacon now! 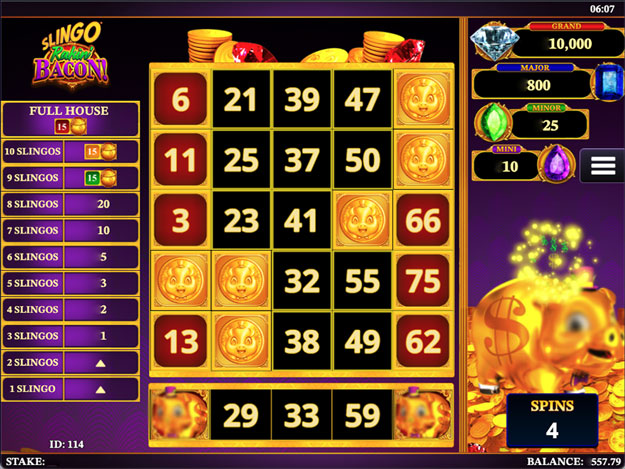 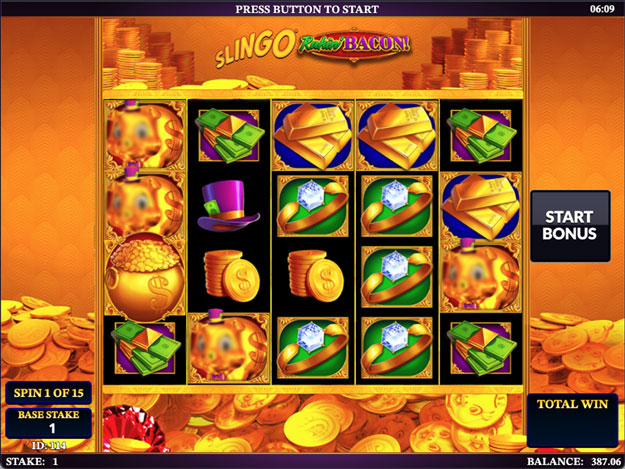 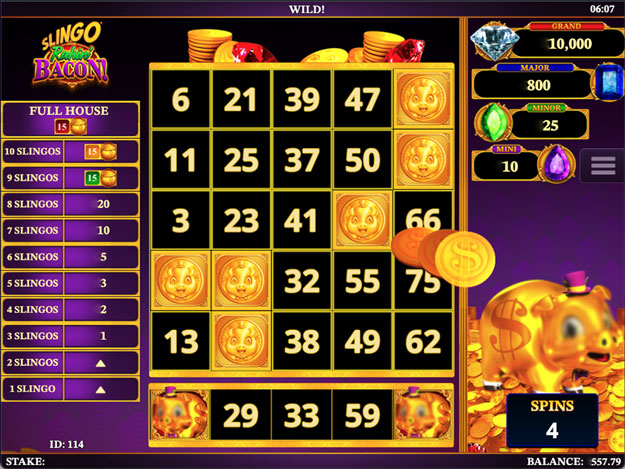 Slingo Rakin’ Bacon is an exciting Slingo mash-up that takes all the best bits of the original game and adds some Slingo magic.

The aim of the game is simple: match numbers on the reel with those on the grid to complete Slingos and work your way up the prize ladder on the left of the screen.

Different prizes are awarded depending on how many Slingos you complete, including cash prizes and free spins on the Rakin’ Bacon bonus game.

As if that wasn’t enough excitement, Wilds can appear on the reels at any time and can randomly trigger the jackpot game.

In the jackpot game, you’ll pick coins to hopefully reveal a winning combination of symbols and win one of four jackpot prizes!

How to Play Slingo Rakin' Bacon at Slingo

Before playing the Slingo Rakin’ Bacon game online, you’ll need to decide on your stake. Once that’s sorted, it’s time to begin!

The aim of the game is to match up numbers on the reel with those on the grid. Just like in other Slingo games, you’ll win a Slingo for marking off a line on the grid – vertically, horizontally or diagonally.

Completing a Slingo on the grid will move you up the prize ladder, and your goal is to mark off every number on the grid to achieve a full house.

Get between three and eight Slingos to win a cash prize at the end of the game. Get nine Slingos or more and you’ll unlock the Rakin’ Bacon bonus game, where you’ll get 15 free spins! The bonus game is a slot game that mimics the original Rakin’ Bacon game.

The more Slingos you complete, the more ways to win there will be in the bonus game.

To add to the fun, there’s also a chance to win one of four jackpots in Slingo Rakin’ Bacon! In this Slingo game the Wild has special powers – not only does it allow you to mark off any number in the column above, but it can also randomly trigger the jackpot game.

In the jackpot game you’ll pick coins in the hopes of revealing three matching symbols and winning the corresponding jackpot prize!

The Slingo Rakin’ Bacon slot game has a luxurious feel to it, with a rich purple colour scheme and piles of gold coins and gemstones surrounding the Slingo grid. You’ll even get to meet Corsquealius, a cheerful golden piggy bank who will keep you company at the side of the reels.

Look out for Corsquealius when he appears on the reels, as he acts as the game’s Wild. He’ll allow you to mark off any number in the column above the one he appears in.

The Corsquealius Wild also has the power to randomly trigger the jackpot game, where you’ll pick coins to hopefully reveal a winning trio of the same symbol.

Other symbols you may come across in the base game include the Free Spin symbol, which awards an additional spin at the end of the game. The red X acts as a blocker to try to stop you matching up numbers.

Complete nine or more Slingos and you’ll gain access to the Rakin’ Bacon free spins game, which mimics the original slot. You’ll get 15 free spins, and the aim is to match up symbols on the reels to hopefully win a cash prize.

You can check the value of each symbol in the paytable by pressing ‘?’ in the game drop-down menu on the game screen and scrolling along.

To give you a quick idea, the most valuable symbol in the free spins game is Corsquealius himself, who is worth 10x your bet for five matching symbols on a payline. Other symbols include gold bars, diamond rings, wads of cash and Corsquealius’ top hat!

Q: Can I play Slingo Rakin' Bacon on mobile?
A: Yes, of course! All of our games are fully optimised for mobile use so that you can enjoy your favourite games on the go.

Q: What is the RTP of Slingo Rakin' Bacon?
A: Slingo Rakin’ Bacon has an RTP of 95.69%. RTP means Return to Player, and it signifies the amount of money a slot theoretically pays out over a large number of spins.