4.3Rating
Slingo Showdown is a gun-slingin’ game that combines the best bits of slots, bingo and poker to create a fun new gaming experience! Complete Slingos and make poker hands to win some legendary cash prizes. It’s time to grab your cowboy boots and get ready for some rootin’ tootin’ action with Slingo Showdown! 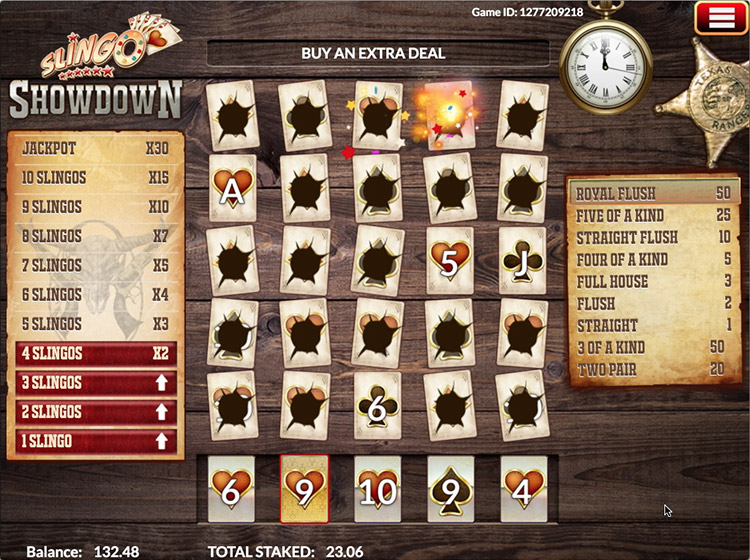 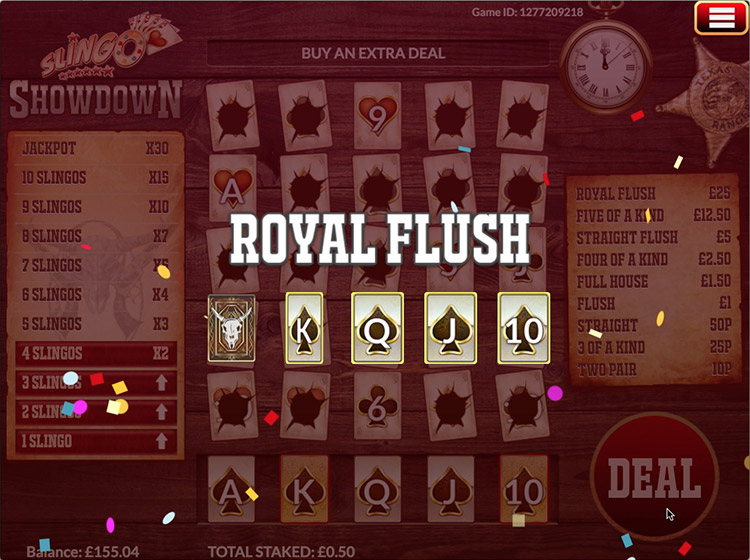 Slingo Showdown brings you an experience like no other thanks to its unique combination of slots, bingo and poker –all sprinkled with a touch of Slingo magic, of course! The aim of the game is to match cards on the reel with those on the grid to complete Slingos and move your way up the pay ladder, with increasing multipliers as you go. You can also win real cash prizes by making poker hands, with a top prize of 50x your original stake for a Royal Flush!

Slingo Showdown is fully optimised for both desktop and mobile use, meaning you can play wherever and wherever the mood takes you. Ready to find some gold? Play Slingo Showdown now!

How to Play Slingo Showdown Online

Playing the Slingo Showdown game is easy! Start by setting your stake using the + / - buttons in the bottom left corner of the game screen. When you’re ready to kick off your Wild West adventure hit ‘START GAME’ to begin!

Each of your initial ten spins, or ‘deals’ places five numbers/symbols in the reel below your grid. If any of the cards in the columns above match the number below it on the reel, the card will be marked off by being shot straight through!

Five marked off cards next to each other (vertically, horizontally or diagonally) creates a Slingo. Each completed Slingo moves you up a place on the prize multiplier bar to the left of your screen, with a top multiplier of 30x your original bet!

There are also some familiar Slingo characters to help you land winning combinations – you can read about them in the next section ‘Slingo Showdown Characters and Features’!

But that’s not all – there are even more ways to win generous cash prizes. Making any of the poker hands listed on the right of the screen will win you the corresponding amount, with a top prize of 50x your bet up for grabs!

After your first 10 deals, you'll be able to carry on playing if you accumulated any Free Deals or by buying extra spins, the unique cost of which is displayed on the deal button for each individual deal.

Slingo Showdown online has a fun Wild West theme complete with poker cards and a Texas Ranger’s badge! However, before you set off on your adventure you’ll need to familiarise yourself with some of the key characters and symbols you’ll meet along the way.

For those of you who are already familiar with Slingo games, you’ll already recognise some of the characters.

There’s also a Free Deal card which will give you a free deal at the end of the game and act as a Wild for poker hands, too. Watch out for the angry-looking devil, though – he’ll try to block you from making winning combinations!

And since you can win prizes for poker hands in this game, here’s a quick run-down of a few of the highest paying hands:

Five of a kind: Four of the same card (e.g. four Aces) plus a Wild card