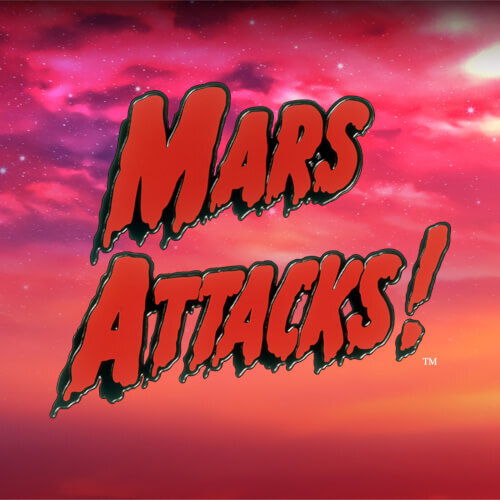 3.0Rating
It’s an alien invasion and you’ve been called to help! Zap through 5 bonus levels and some out-of-this-world features that’ll boost your winnings! Based on the 1996 film Mars Attack, this slot is filled with extraordinary action, all ready and waiting to give you a boost! The 5 funky features could add Wilds to your reels, make winning symbols sticky and even transform symbols! There’s also 5 Bonus rounds to reveal Martians, Spies, Big Money Boosts and UNLIMITED Free Spins!

Set your Bet using the options provided, ensuring the amount is suited to you. When you’re ready to play, hit SPIN. 5 modifiers could randomly be triggered as you play:

Find 3 or more Bonus symbols to trigger the Mars Attack Bonus. When activated you could move up the meter to win 1 of 5 Bonuses:

You’ll pick suspects from a board and reveal whether they are Martians or Humans. Every Martian revealed = a cash multiplier. Find 3 Humans and the bonus will end. Find the Martian Ambassador and the Big Money Boost will be added to your wins!

WE COME IN PEACE:

Pick from containers to fill banks, this will award Multipliers or the Big Money Boost. The Martian Orb will end your round, if found!

A new slot screen is shown and you’ll be given 5 Free Spins along with Expanding DNA Wilds on every spin, with each spin the Wilds increase by 1 symbol height.

Another new slot screen is shown, but this time you get 10 Free Spins along with Roaming Wilds that move on every spin!

The best round yet! Unlimited Free Spins are yours! On any spin within the Final Stand Bonus, a special Advance symbol may appear which will add value to Human and Martians progress bars that can award you with multiplied wins and/or eliminated low-value symbols! If the Humans will the battle in the Final Stand Bonus, you will be awarded an additional ‘Big Money Boost’ to your winnings!