Terminator 2 is a fast, fun and exciting slot inspired by the cult 80s film featuring Arnold Schwarzenegger as a cyborg assassin! T-800 vision turns reels red and awards mystery cash prizes, while T-1000 can morph into other symbols to win amazing cash prizes. With its simple gameplay and bonus features plus real video clips from the film, you’ll love this high-energy slot. Ready to be reunited with Arnie? Play Terminator 2 now! 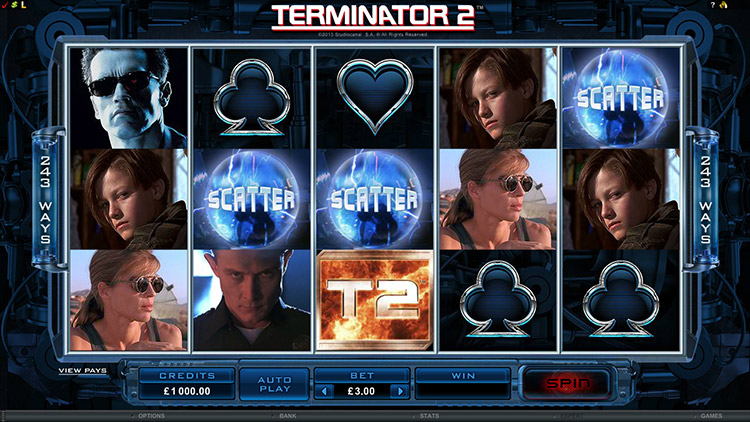 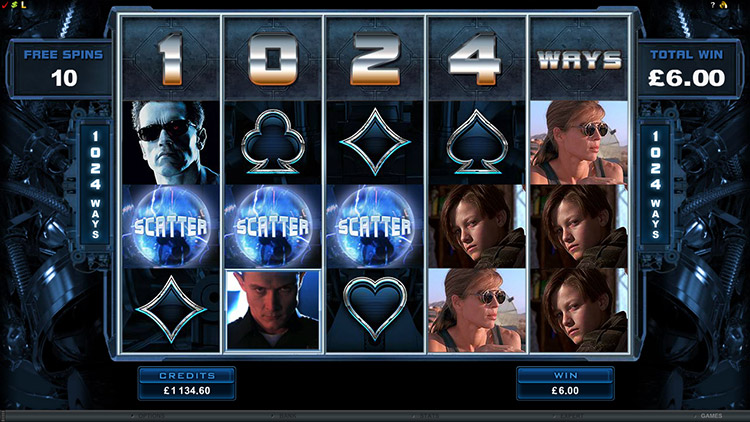 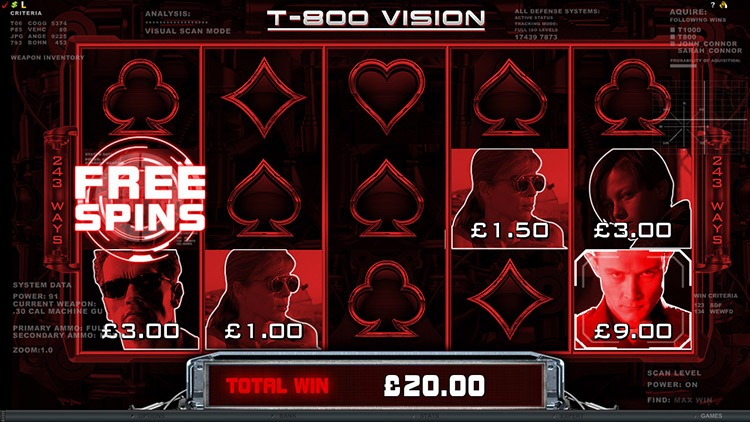 He said he’d be back, and he didn’t disappoint! The Terminator 2 game sees the return of everyone’s favourite cyborg, T-800, who was immortalised by Arnold Schwarzenegger in the Terminator films. In the Terminator 2 movie, Arnie’s mission is to protect Sarah Connor and her son John from the evil T-1000, an advanced cyborg with shape-shifting qualities!

In this action-packed slot game you’ll find all of the main characters from the film, along with real video clips so you can relive the best bits!

T-800 scanner vision can be triggered randomly throughout the game, turning the reels red and replacing all high-paying symbols on the reels with mystery cash prizes.

Find three Scatters anywhere on the reels to win 10 free spins, with the reels morphing from a 5x3 to a 5x4 set to give you 1,024 ways to win!

Terminator 2 is fully optimised for desktop and mobile use, so you can play whenever and wherever suits you best. Ready to take on T-1000? Play Terminator 2 now!

How to Play Terminator 2 Slot Online

Before playing Terminator 2 online you’ll need to decide on your total bet. You can do this by clicking the stack of coins icon at the bottom right of the game screen to determine your bet size.

Once you’re ready to begin, hit the white spin button on the right to begin!

For most of the symbols winning combinations are achieved by landing three matching symbols on adjacent reels, from left to right. However, you’ll only need to find two blue orb Scatters to be rewarded.

The T-800 Vision feature can be triggered on any spin in the base game. The reels will turn red (just like T-800’s special scanner vision in the film) and a mystery cash payout is awarded for each character symbol on the reels!

When T-800 Vision is active, you’ll only need to find one blue orb Scatter to trigger the free spins round!

If T-800 Vision is not active, the free spins round is triggered by finding three blue orbs anywhere on the reels. Just like T-1000 the reels will then morph from a 5x3 to a 5x4 format, giving you an amazing 1,024 ways to win!

During Free Spins, T-1000 can morph into any other character on the reels to help you achieve the highest possible win.

The Terminator 2 game is set against a dark blue metallic background with the machinery of the T-800 visible behind the reels. However, before you start playing you’ll need to familiarise yourself with some of the key characters and symbols you’ll meet along the way.

The highest paying symbol on the reels is the blue orb (which Arnie arrives in at the beginning of the film). It’s worth an incredible 100x your bet for five adjacent symbols. It also acts as the game’s Scatter – find three of them anywhere on the reels to win 10 free spins!

The next highest paying symbol is the fiery T2 logo. It’s worth up to 50x your bet for five adjacent symbols from left to right, and it also acts as the game’s Wild. This means it can replace all other symbols except the Scatter (and T-1000 in Free Spins).

It’s followed by Arnie himself, wearing his trademark dark sunglasses.

The young John Connor is next, followed by T-1000 (although in Free Spins he’ll be able to morph into any other character symbol to maximise your wins!).

Then it’s Sarah Connor, followed by the evil-looking robot.

The lower paying symbols are represented by the classic card suits (spade, heart, diamond, club), although they have been given a futuristic makeover to fit in with the game’s theme.