What Makes Book of Dead so Popular?

The Book of Dead Online Slot

Book of Dead is one of the most popular games in online slots history, and it’s easy to see why. Since the game was released by Play ‘n’ Go back in 2014, players all over the world have been drawn to its Ancient Egyptian theme and exciting bonus features.

For those of you who haven’t played it yet (where have you been?!), we’ll give you a quick introduction. The Book of Dead slot game centres around the story of Rich Wilde, a fearless (and handsome) explorer who is on a mission to find the sacred Book of Dead, hidden deep within the pyramids of Egypt.

In the game, you’ll join him on his adventure as you match up symbols to win real money prizes. As you might expect, the Book of Dead itself is the key symbol in this game, acting as both a Scatter and a Wild to give you even more chances to win.

Find three book symbols anywhere on the reels to enter the Free Spins game, where you’ll get ten free spins plus a random expanding symbol to help you land winning combos.

We also love the exciting Gamble feature that plays after every win, which gives you the chance to double or even quadruple your winnings if you guess the cards correctly.

It Has an Ancient Egyptian Theme 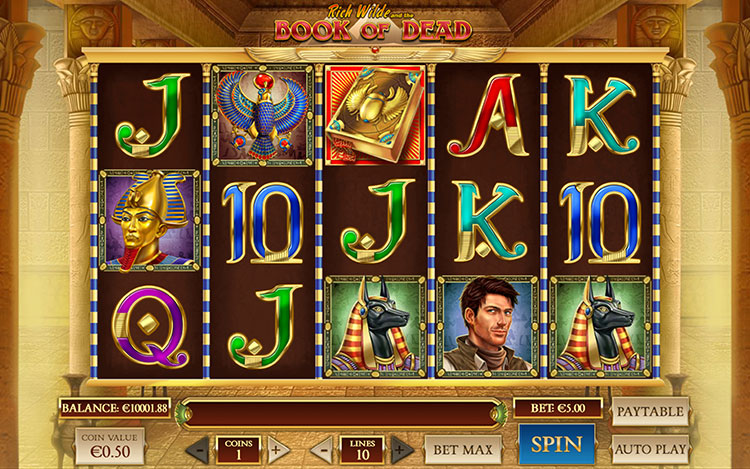 Ancient Egypt is one of the most popular themes for online slot games, with players fascinated by the secrets of the pyramids and the promise of hidden treasure.

Book of Dead follows brave explorer Rich Wilde (who bears a certain resemblance to Indiana Jones!) in his quest to find the precious Book of Dead itself. The story goes that the book was written to help deceased pharaohs to navigate the underworld and enter the afterlife, and it holds all the secrets of the dead.

In this exciting slot you’ll meet Egyptian gods Anubis, Osiris and Horus, and you might just be lucky enough to find some hidden treasure along the way.

One of our favourite features of Book of Dead are the expanding symbols, which give you even more chances to land winning combinations!

As we mentioned earlier, the book symbol acts as both the Scatter and the Wild. Find at least three book symbols anywhere on the reels and you’ll trigger the Free Spins round.

Before Free Spins begins, a random symbol will be chosen to act as a special expanding symbol throughout the bonus. After prizes for regular winning combos have been awarded, the special symbol may expand to cover entire reels. If your special symbol is a high-paying one like Rich Wilde himself, you could be in for some generous cash prizes! 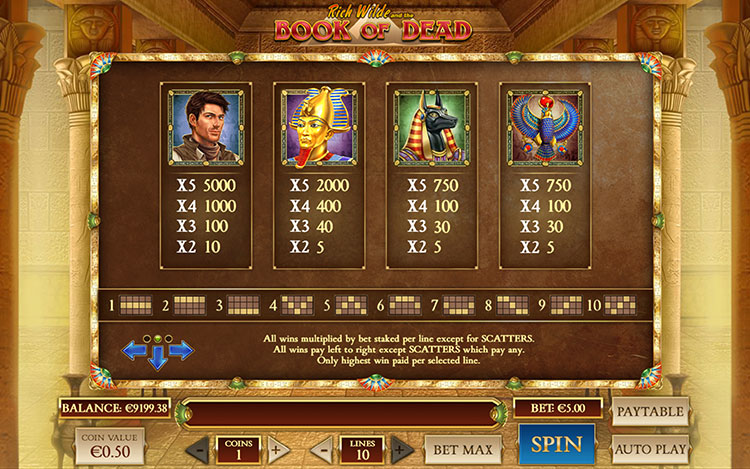 Activate the in-game Free Spins round by landing three or more Book of Dead scatters anywhere on the reels. You’ll win ten free spins to start with, and before the round begins your expanding symbol will be chosen (see previous section).

During the round, find three more book Scatters to win an additional ten free spins, with the potential to keep going until the maximum prize amount is won!

Let’s Not Forget about the Gamble Feature 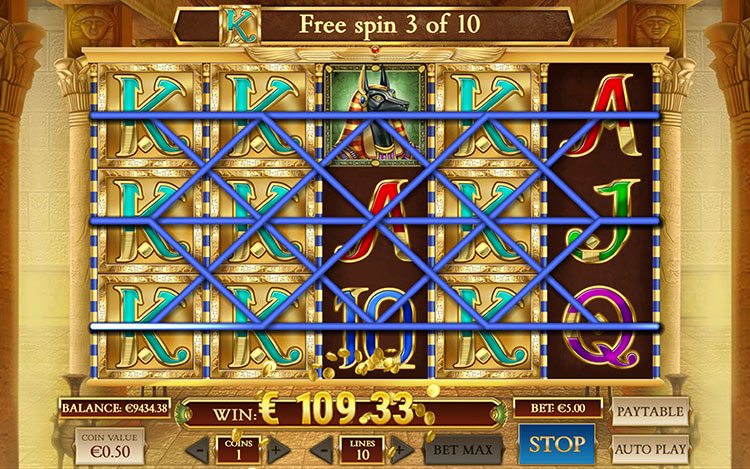 Another great feature of Book of Dead is the Gamble option. Every time you win, you can choose to stick with what you've got or gamble for the chance to multiply your winnings.

Book of Dead is a high-volatility slot with an RTP of 96.21%. In case you’re not sure what that means, RTP is the return to player percentage. This is the percentage of all wagered money that a slot will pay back to players over an extended period of time.

In high-volatility slots like Book of Dead, the risk is greater but there are bigger prizes up for grabs, making it perfect for those looking for an edge-of-your-seat gaming experience!

Book of Dead’s huge potential jackpot is another reason for its enduring popularity. If you’re lucky enough to land five Rich Wilde symbols on a payline you’ll win the top prize of 5,000x your stake!

With prizes like these, it’s easy to see why Book of Dead has seen so much success.

With its fun Ancient Egyptian theme, crystal-clear graphics and amazing real money prizes, Book of Dead is one of the most popular slot games ever! Play it now at Slingo.com for an exciting gaming experience in a safe, secure environment that puts you first.

10 Luxury Dog Hotels In The UK That Your Pooch Will Love!

Off on your travels and need somewhere for your furry friend to stay? Here are the best luxury dog hotels in the UK that your pooch will love!