13 Of The Best Luxury Hotels Near London From grandiose boutique hotels to unforgettable, intricately-designed hidden sanctuaries - the world's finest hotels can be found minutes away from central London.

If you're searching for the epitome of luxury, then an unrivalled getaway awaits you.

Read more about the most exquisite hotels near London below, or if you're considering another destination, check our lifestyle blog for more inspiration.

Here Are 13 of the Best Luxury Hotels Near London

The first luxury hotel on the list is a mesmerising step into another era. Iconic cathedral peaks greet you as you enter, towering above almost as if ascending towards the heavens.

Nestled in Canterbury, the contemporary lodge boasts an immaculate marriage between old and new, with gothic styles meeting contemporary interiors in picturesque fashion.

Experiencing the splendour of Canterbury Cathedral Lodge will be nothing short of idyllic.

The manor is the embodiment of immaculate architecture - old-styled rooms furnished in true classical style. You're also guaranteed a masterfully crafted cuisine experience at their Michelin-star dining room.

The tranquil and dreamy manor is rightfully rated among the best hotels to visit.

Time to rejuvenate your soul with a blissful stay at Coworth Park. Prepare to be enticed by its lavish, rural charm - a secret hideaway from the rest of the world.

It's the perfect oasis of calm that is both distinctively refreshing and relaxing. It also has a rich history as home to prestigious figures that shaped the country in formidable ways.

Coworth Park is notorious for its delightful scenery, lavish buildings and remarkable culinary experience compliments of its Michelin-star restaurant. It's simply otherworldly!

Upon entry, you'll be greeted by meadows and woodlands leading to an iconic 17th-century building in the Hampshire hills. Heckfield Place is a country haven like no other, rooted in biodynamic principles and rich heritage.

Equipped with an eco-friendly spa, Heckfield Place is ideal for the perfect day of relaxation and unwinding. The Marle restaurant also prides itself in using local, organically-sourced food and has been awarded a Green Michelin Star.

Think warm, inviting and meticulously maintained - it's delightful and magnificent.

On the banks of the River Thames lies a grandiose riverside mansion. A Victorian manor with sweeping gardens boasts a divine scenic and tranquil setting.

Guests have an array of wonderful facilities at their disposal, such as a riverside garden, spa, honesty bar and one of the finest boutique hotel restaurants available today.

An exquisite hotel surrounded by magnificent rolling hills on a 162-hectare estate, Beaverbrook Country House Hotel is notorious for having been frequented by the likes of Winston Churchill and many other influential and prominent figures.

The luscious landscapes have been home to famous high teas and gatherings, of which only tales remain as remnants. Experience the charm and extravagance of the surroundings, observe the original paintings and unwind at this opulent Victorian hotel.

The exquisite hotel has rooms named after prominent guests, priceless antiques and absolute perfection in every detail. You'll be welcomed by a grand fireplace and oak panelling, and treated like a treasured guest!

Feast on palate-tingling cuisines and enjoy world-class service during your stay at Cliveden. Enjoy the splendour of Stoke Park whilst being captivated by the iconic parkland setting. Most people know Stoke Park for its iconic feature as the background in the "Goldfinger" movie.

This magnificent palace is home to a 27-hole parkland golf course and was once owned by Queen Elizabeth I and William Penn. It's home to 49 intricately designed and world-class bedrooms - dreamy is an understatement!

All facilities are state-of-the-art, as expected from such a fine establishment. Iconically known as the home of the England National Football team before international events - the luxurious 128-bedroom hotel is simply fantastic.

It's an ultra-posh Georgian mansion with pristine facilities, including a 2 AA Rosette restaurant with a stunning drawing room, brassiere and cocktail lounge.

Any stay at Sopwell House will be unforgettable thanks to the state-of-the-art decor and elegant atmosphere - it's pure bliss.

Experience a 13th-century castle quite literally equipped for the royal family. Imagine mazes, gardens and lakes and an exclusive opportunity to stay in an iconic castle.

Spend the night in the Anne Boleyn Wing, looking out over the orchard. Incredible cuisine, professional staff and a magnificent royal atmosphere - it's an intriguing insight into another era.

Hever Castle might not be Buckingham Palace, but it is the ultimate getaway that will leave you feeling like a queen. 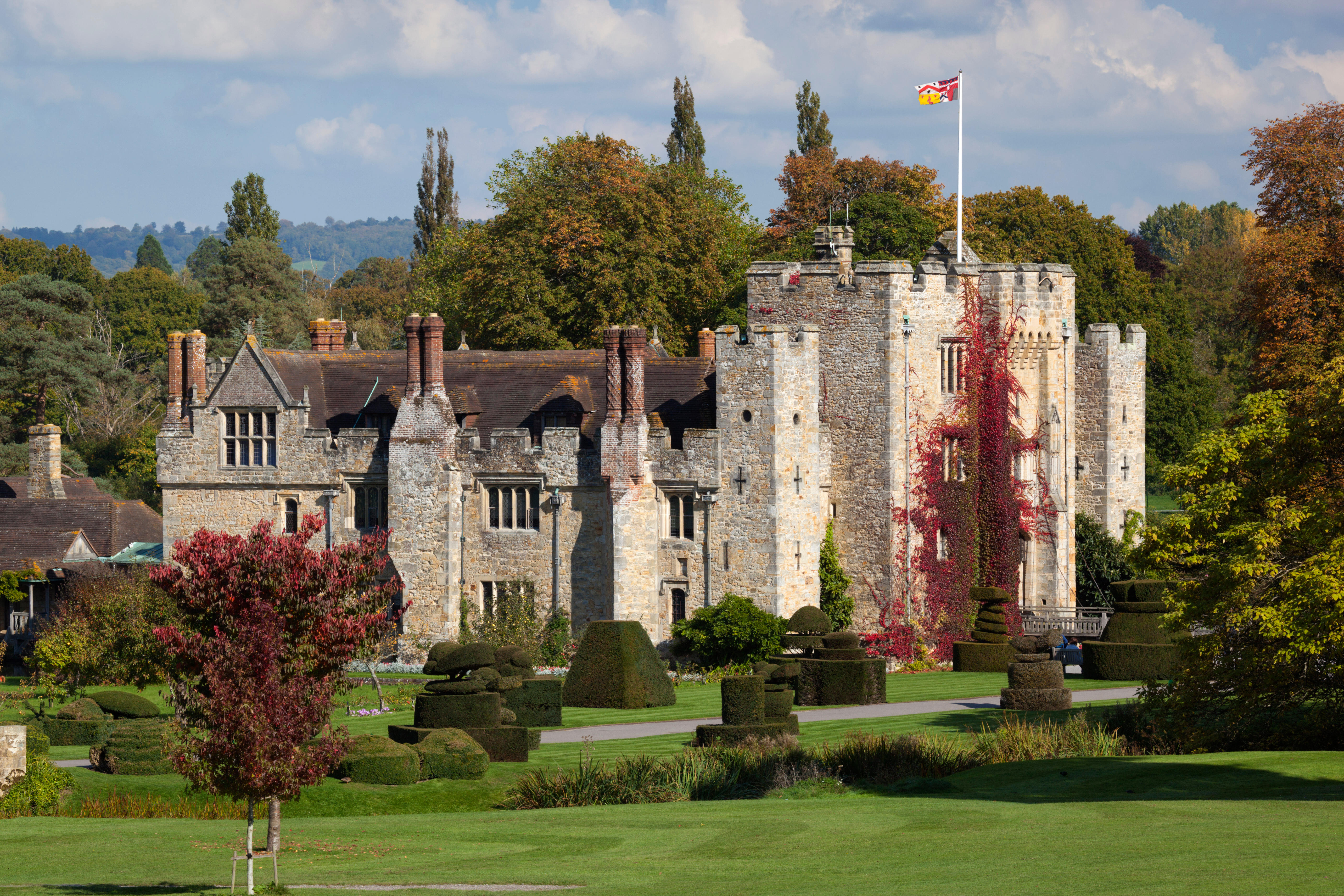 11. The Flitch of Bacon, Essex

The Flitch of Bacon is a timeless contemporary and quirky establishment that's an experience like no other. It's a 16th-century pub that houses incredibly cosy and inviting guest rooms that are perfect for a memorable occasion.

It's a classical-styled, comfortable and welcoming abode that will leave you enchanted by its quirkiness.

The rustic feel, unique ambience and outstanding location make the Flitch of Bacon an exquisite attraction to visit.

Only a short way out of London lies the magnificent Eastwell Manor in Kent Downs. A glorious rural setting with a neo-Elizabethan style.

If you're looking for a pristine getaway embodied in rural charm - look no further.

Equipped with a fitness centre and steam room, you can relax and unwind as you deserve.

The perfect marriage of modern and traditional, which curates an unforgettable experience for you and your loved ones. The contemporary-rustic design creates an exceptional homily atmosphere.

You'll be welcomed by professional staff, ready to accommodate your every need. The rooms are simply exquisite, and the cuisine and culinary experience are divine.

This is the perfect romantic getaway for couples, young lovers and old. Experience the majestic ambience of The Crown Hotel. 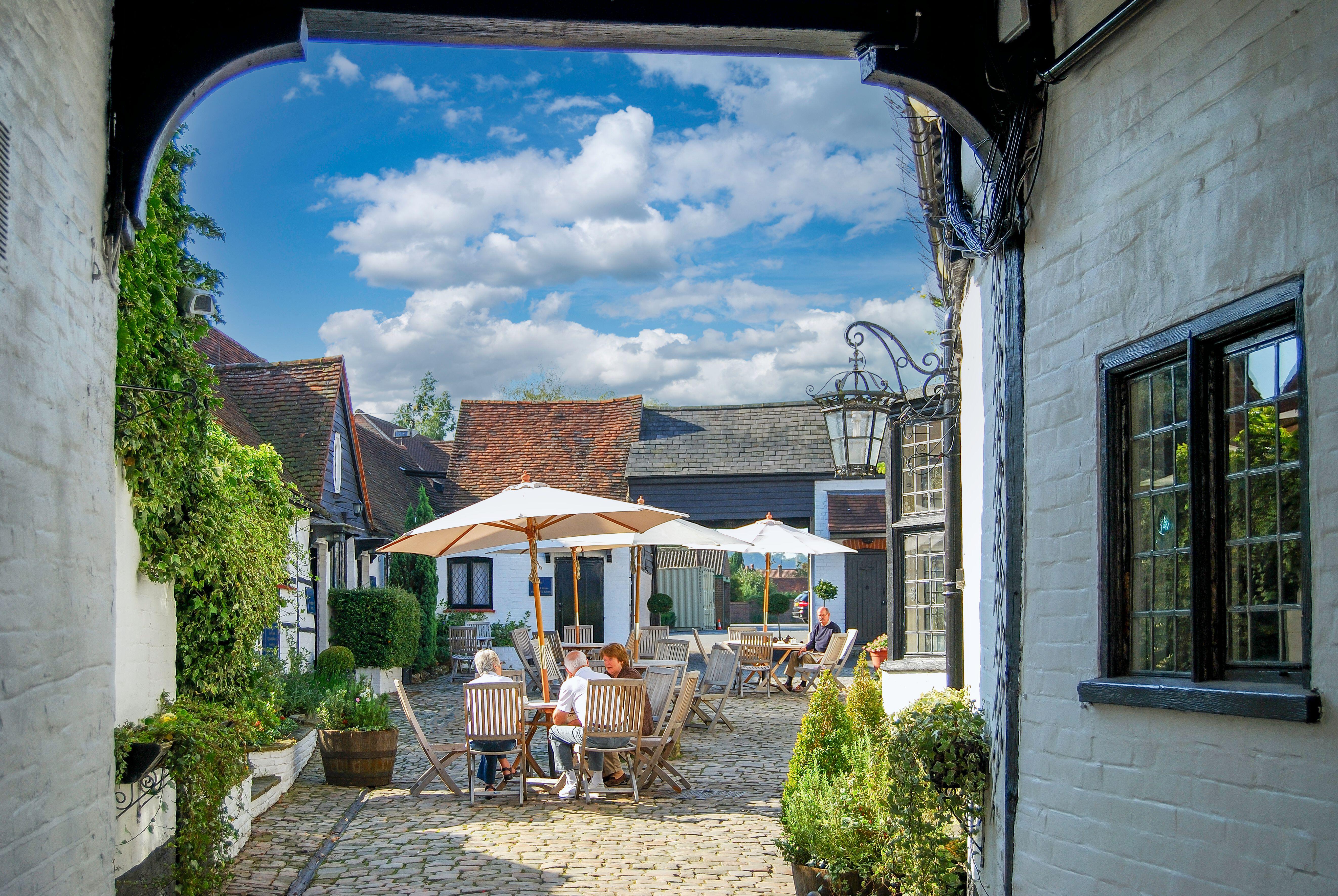 What are some of the property amenities at Flitch of Bacon?

The Flitch of Bacon is an incredible establishment that caters impeccably for guests. Some of the property amenities include a dining room, bar, concierge, Wi-Fi, street parking and a banquet room.

It's a homely location that provides a wholesome experience. You're guaranteed excellent service, professional staff and an unforgettable atmosphere.

Can you take dogs to Coworth Park?

Dogs are not allowed at Coworth Park. However, an exception is made for service dogs.

How many bedrooms does Heckfield Place have?

Heckfield Place has 47 bedrooms, all of which are exquisite and perfect for couples. The rooms are maintained pristinely and assure guests have a comfortable and enjoyable stay.

How many Michelin Stars does Gravetye Manor restaurant have?

Gravetye Manor has one Michelin Star, which it retained for 2022.

A random inner-city London hotel is often the easiest to consider, but the real gems are located nearby but outside of the hustle and bustle.

A standard London Liverpool Street hotel doesn't leave you feeling satisfied and leaves you longing for something a little more luxurious. That's why you need to explore the finer establishments.

If you're looking for a romantic escape, some time away from home, and preferably a dip in an indoor pool - choose a luxury hotel near London!

No matter where in the UK you are looking to go on holiday, we can give you plenty of ideas for luxury hotels you could stay in! Check out our other guides below:

18 Of The Best Luxury Cottages in Northumberland

17 Of The Best Luxury Cottages in Yorkshire