The biggest and best music festivals in the world

A summer music festival is an annual rite of passage for many music lovers. Whether you’re into pop, EDM, rock, hip-hop, heavy metal or anything in between, there is likely to be a festival for you.

And with so many great festivals to choose from right around the world, you can combine your festival experience with a city break too.

But which global festivals are the biggest and the best? To find out, here at Slingo we’ve analysed 50 of the biggest festivals (based on Instagram following) on a range of factors such as their capacity, ticket price, number of stages and dates. 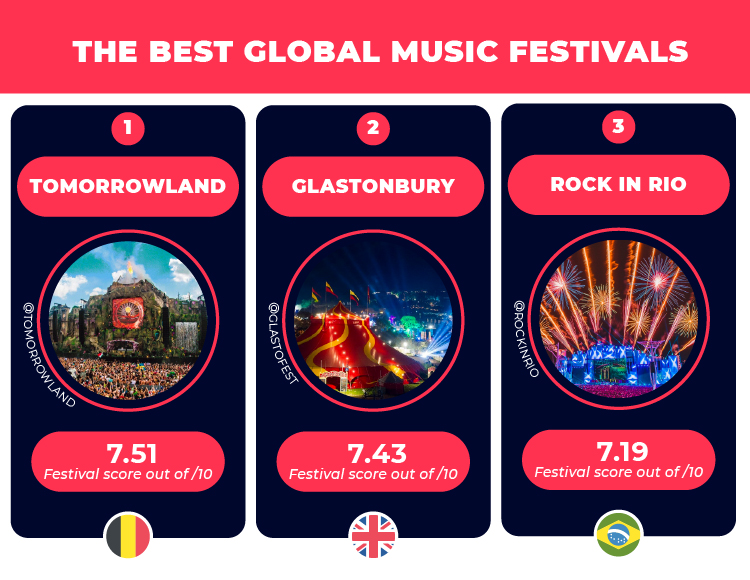 There are a number of great dance festivals to check out across the world, but 17 years after its first edition, Tomorrowland remains the one to beat.

The Belgian festival has by far the biggest social media presence of any festival with 7.5 million followers and takes place over not one, not two, but three different weekends in July, with 16 incredibly designed stages.

Perhaps the most famous music festival in the world, Glastonbury comes in second place, being the festival with by far the biggest attendance, with over 200,000 people descending on Worthy Farm for the festival.

Glasto also has an impressive 31 stages and areas to discover, from the iconic Pyramid Stage to late-night areas such as Shangri-La and the flame-throwing Arcadia spider.

One of the most historic festivals in the world is the famous Rock in Rio, in Brazil, with 1.5 million people attending the first-ever edition back in 1985.

The festival scored highly across the board (despite having just three stages) with a social following of 1.4 million, taking place across seven days, with around 100,000 people attending each day.

The most followed festival

Social media is a good way to gauge the overall popularity of a festival and in this regard, Tomorrowland is way out in front, with over 7.5 million followers on Instagram.

The cheapest festival to attend

As great as they are, festivals aren’t cheap, with additional costs such as food and drink all adding to the overall cost.

When it comes to your ticket price though, the cheapest of our 50 festivals is Time Warp, in Mannheim, Germany, with a ticket to the festival costing just €65.

By far the biggest festival when it comes to sheer scale is Glastonbury, which welcomes over 200,000 people each year.

The festival site itself stretches over 900 acres in the Vale of Avalon, measuring more than a mile and a half across with a perimeter of about eight and a half miles.

The festival with the most stages

Held within the walls of an old Serbian fortress, EXIT has won numerous festival awards since launching over 20 years ago and has now grown to host 40 different stages and zones with performances from artists from across the musical spectrum.

This year the festival will be headlined by Calvin Harris and Nick Cave and the Bad Seeds, with performances from the likes of Joel Corry, Honey Dijon and the Undertones too. Depending on your endurance, three days at a festival might be more than enough for you, but more festivals are increasing their number of dates, either by adding more dates or putting events on across multiple weekends.

Primavera Sound in Barcelona is one such festival, with two main weekends (with different lineups) as well as the Primavera a la Ciutat and Brunch on the Beach events, taking the festival's total duration to 11 days!

We began with a list of over 150 music festivals from around the world, before whittling this down to the top 50 based on their Instagram followings.

These 50 festivals were then ranked on the following factors, giving each festival a normalised score out of 10 for each factor before taking an average Festival Score across each of the five factors.

The cost of a full ticket to the festival. In each instance, the cost of the cheapest available full ticket for the festival was taken (excluding early bird releases) and converted from local currency to GBP and USD using exchange rates from XE as of March 7th 2022.

The number of stages and areas at each festival, as of the most recent edition of the festival.

All sources for ticket prices, capacity and number of stages can be viewed here.

22 Of The Best Luxury Dog-Friendly Cottages In The UK