The UK TV personalities with the highest income and social followings

The UK’s love for television is no secret, and the best TV presenters connect with audiences while hosting morning programmes, late-night talk shows and even documentaries. In some cases, our favourite TV personalities earn more than actors, with net worths of hundreds of millions of pounds! Some television hosts are more loved than others, with large followings on social media, and the ability to earn thousands of pounds from sponsored Instagram posts and reels.

Slingo wanted to discover which British TV presenters earn the most, by looking at how much the top television presenters and personalities can make on Instagram and their estimated net worths. We also wanted to find out which television hosts have the most followers on Instagram, TikTok and Twitter and which personalities have won the most awards.

The TV Presenters with the Highest Potential Income 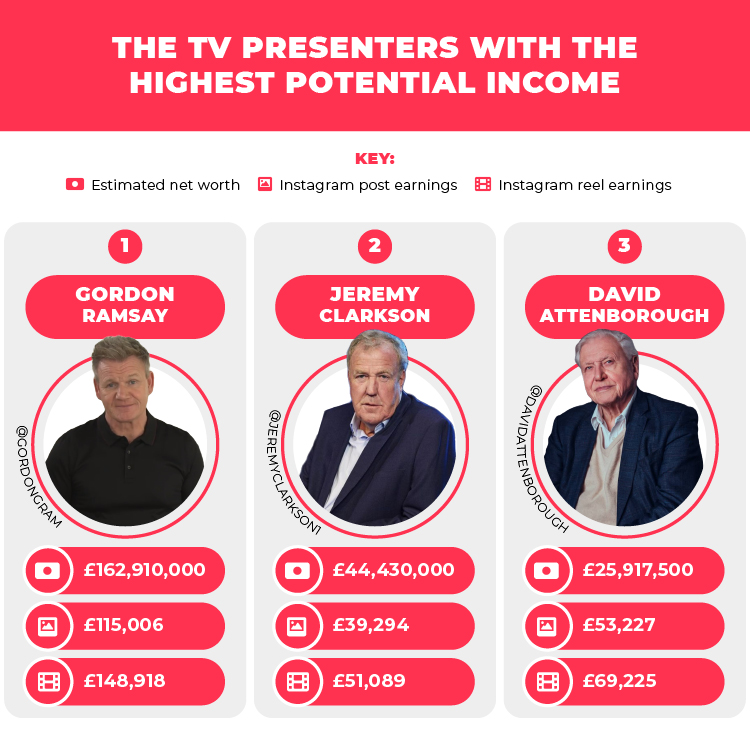 One of the most well-known chefs in the world, and star of popular TV shows The F Word and Hell’s Kitchen, Gordon Ramsay is the highest-earning TV presenter in the UK. Ramsay has a staggering estimated net worth of £162.91 million, according to Celebrity Net Worth.

Presenter of Top Gear, Robot Wars and The Grand Tour, Jeremy Clarkson is one of the UK’s most popular and highest-earning TV personalities.

Clarkson’s net worth is estimated at £22.42 million and he could earn up to £51,089 for posting a sponsored reel on Instagram.

Best known for presenting the Life documentary collection on the BBC, David Attenborough is loved worldwide for his work in conservation and broadcasting. 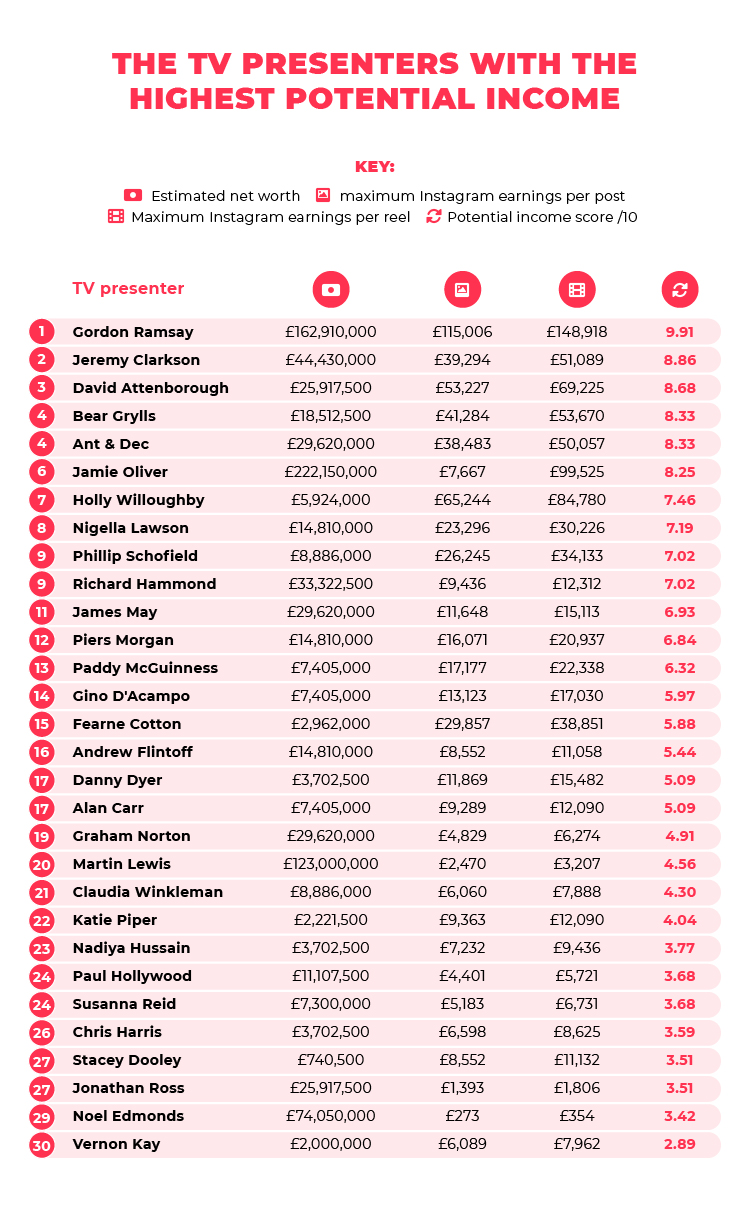 The TV Presenters with the Most Social Media Followers 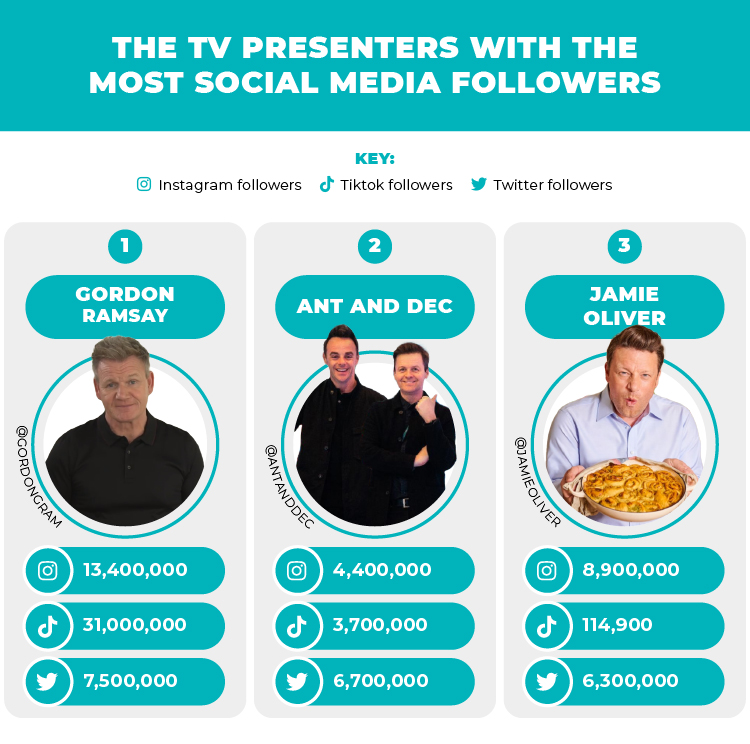 Gordon Ramsay is in first place as the UK television personality with the biggest following on Instagram, TikTok and Twitter.

Ant and Dec have been on our television screens since 1994, so it’s no wonder that they are some of the most loved British presenters. With joint social media accounts on Instagram, TikTok and Twitter, the duo have one of the largest social media followings out of all TV presenters.

Jamie Oliver is the second TV chef personality to rank in the top three for the most-followed presenters in the UK. Gaining popularity from his show The Naked Chef, Oliver has a total of 8.9 million Instagram followers, 114.9 thousand Tiktok followers and 6.3 million Twitter followers. 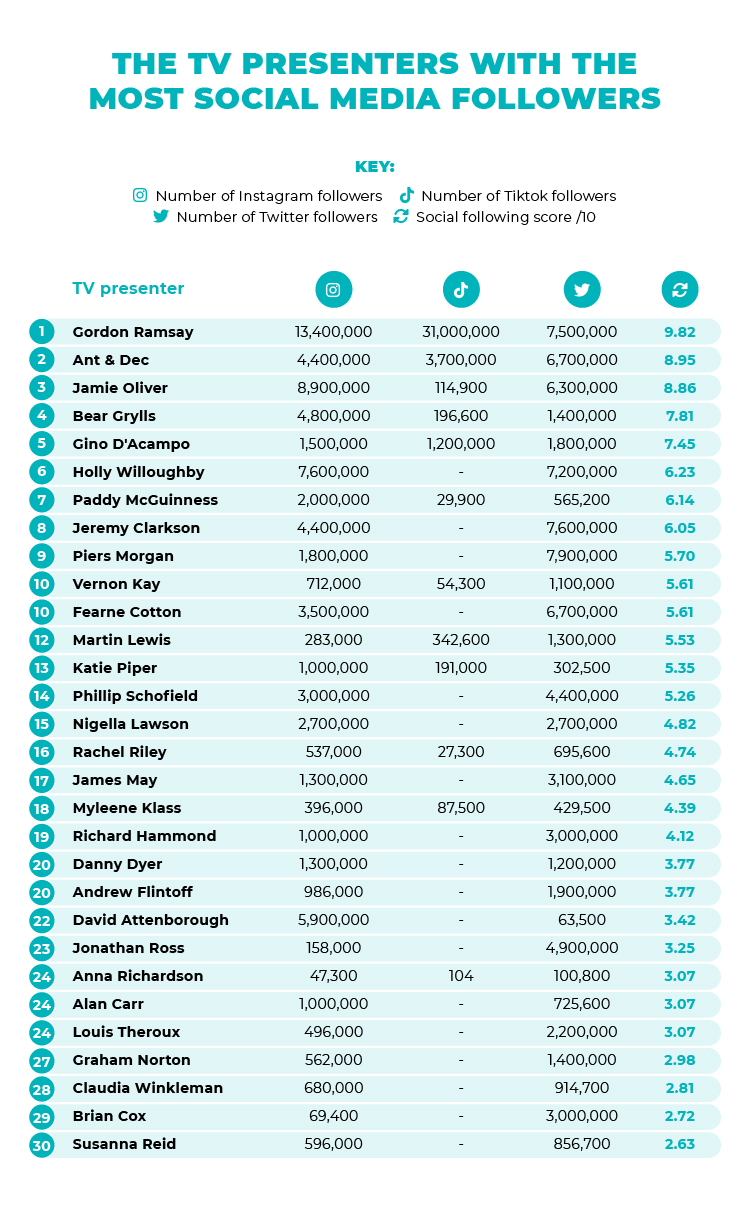 The TV Presenters with the Most Television Awards 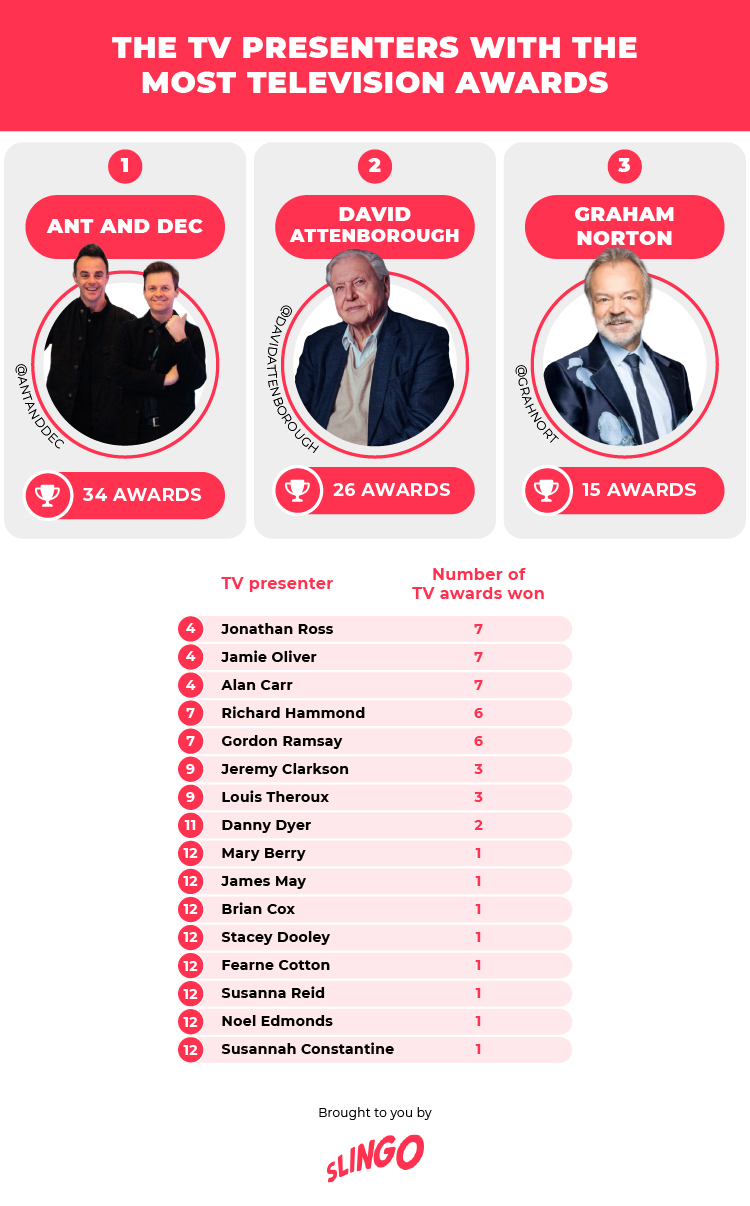 Guinness World Record holders for the most consecutive wins of Best Presenter at the National Television Awards hosted in London, Ant and Dec have the most TV awards out of all UK presenters.

The hosts of Britain's Got Talent, Ant & Dec's Saturday Night Takeaway and I'm a Celebrity, Get Me Out of Here! hold 34 joint wins for BAFTAs, NTA awards and Royal Television Society awards among many others.

National treasure and three-time Primetime Emmy Award winner, David Attenborough is in second place as one of the UK TV presenters that have won the most television awards.

Attenborough has 26 awards, including BAFTAs for Blue Planet II and Planet Earth II.

Norton has 15 television awards, including those from the NTAs and British Comedy Awards.

Slingo wanted to find the highest-earning UK TV Presenters, therefore looked at the social followings, potential earnings and number of TV awards received by 39 of the top presenters in the UK.

To find the TV presenters with the biggest social followings, we used Instagram, TikTok and Twitter to find the number of followers of each presenter’s account. For presenters without a personal account, the total number of followers was recorded as 0. To calculate an overall score out of 10, the number of each presenter’s followers on each social media platform was given a relative score out of 10. An average of the three scores was calculated to give a ‘social following score’.

To find the TV presenters with the most TV awards, the number of award wins for each presenter on IMDb was sourced.