The rise of TikTok over the last couple of years has changed how a lot of people consume media and discover new things: from music, films and even books. For example, Madeline Miller’s book, The Song of Achilles went viral on TikTok and then sold over two million copies.

But, how does that apply to the music industry? Plenty of songs go viral on TikTok every year, whether it’s in dance videos, a guy simply skateboarding or the new season of Stranger Things drops with some timeless tunes.

To see if TikTok success translates to mainstream success, we at Slingo have looked at viral TikTok songs that have charted in the UK from 2021-2022, to see if the social media platform influences song success.

The Most Viral TikTok Songs 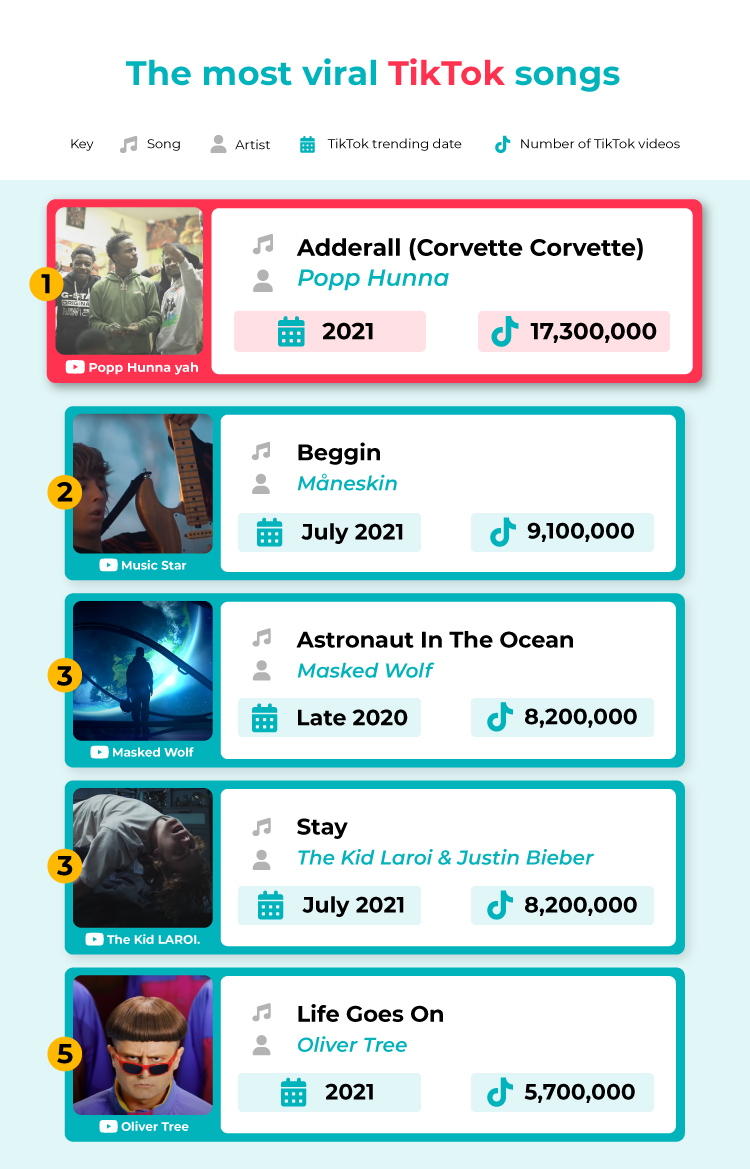 In 2021, TikTok released its most popular songs on the platform in the United States and topping that list was “Adderall” by Popp Hunna. The song has been used in 17.3 million videos on the platform, soundly beating the competition. It’s hard to nail down when the song went viral, however in March of 2021, comedian and actor Kevin Hart posted a video on TikTok of him doing the dance challenge associated with the song, gaining 10.5 million likes.

A cover of the 1967 song “Beggin” originally by The Four Seasons was released by Eurovision winners Måneskin on TikTok and it quickly became very popular. By July of 2021, it had already featured in 3.9 million videos. As of July 2022, it has now been in more than 9.1 million videos on the platform.

3. Astronaut In The Ocean - Masked Wolf

This song originally went viral due to a YouTube video by “Jasun” featuring a Fortnite montage. However, Masked Wolf’s “Astronaut In The Ocean'' didn't stop there. From as early as October of 2020, TikTok users were using this song widely as a build-up to a transition in their videos. This later led to the rapper signing with Elektra Records and re-releasing his songs digitally early in 2021. The song kept trending into 2021, in montages, compilations and gaming clips.

Without birthing a series of trends on TikTok, Oliver Tree’s “Life Goes On” had over 200 million streams on Spotify in 2021, now having risen to over 385 million. Even so, it has still been used in 5.7 million videos on TikTok. User sean_exotic used the song in a video where he and a panther kept putting their hand or paw on top of the others, which gained 13.6 million likes.

The Most Viral TikTok Music Genres 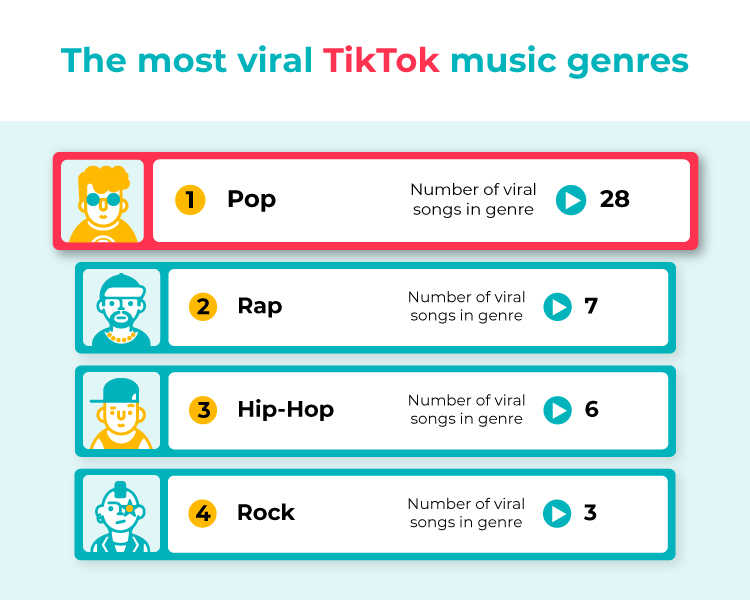 Number of Viral Songs in Genre: 28

The genre that featured the most amongst viral TikTok songs was pop, by a rather overwhelming margin. Artists such as Olivia Rodrigo, Doja Cat and Harry Styles all had pop songs featured as viral on TikTok, making the platform highly pop-oriented.

Number of Viral Songs in Genre: 7

Rap was the genre with the second most songs to go viral on TikTok between 2021 and 2022. Most notably, Masked Wolf’s “Astronauts In The Ocean” was the highest trending rap song, coming in the top five overall.

Number of Viral Songs in Genre: 6

With two (and another being in the alternative hip-hop genre) of the top five most viral songs on TikTok between 2021 to 2022 being hip-hop songs, it’s little surprise that it’s the third most popular genre for viral TikTok songs.

Number of Viral Songs in Genre: 3

With just three songs that went viral on TikTok being rock songs, this genre takes the fourth spot. One of the songs, “Master Of Puppets” by Metallica was also one of the tracks featured in season four of Stranger Things, during Eddie Munson’s epic solo during the final episode. 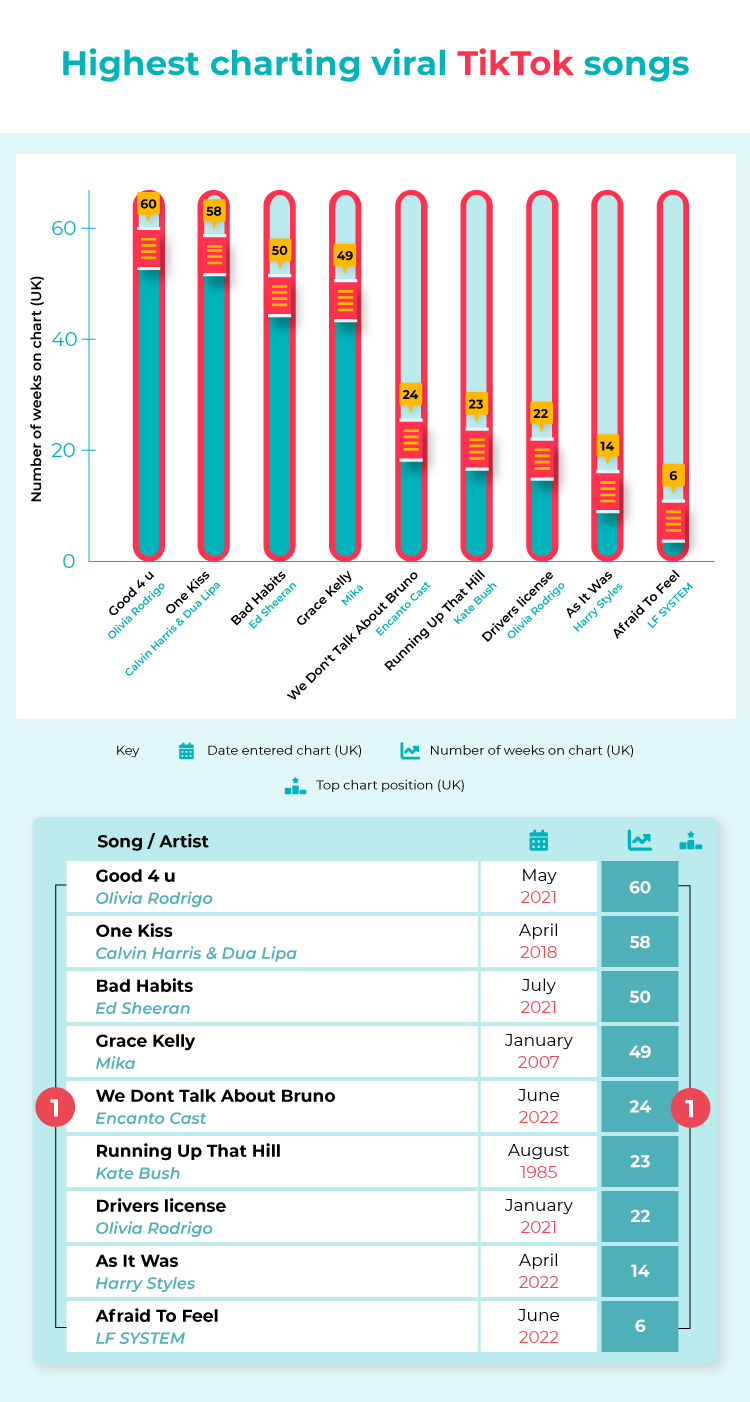 Nine viral TikTok videos climbed their way to the number one spot on the UK Official Charts, with three of these songs being in the current top three, as of the 13th of July. Olivia Rodrigo had two songs go viral on TikTok, the first “good 4 u” went viral due to its resemblance to an old Paramore song. And the latter went viral due to TikTok user Mel Sommer’s reenactment of a specific moment from the “drivers license” music video.

Other songs were “One Kiss” from Dua Lipa and Calvin Harris, which went viral after a Liverpool football fan posted a video of him lip-syncing it, which trended not just on TikTok but is now a trend among Liverpool fans. Of course, Disney’s movie Encanto’s song “We Don’t Talk About Bruno” also trended extremely well. It was used in almost one million TikTok tracks and made it number one on the UK charts. The song features the main cast, including Stephanie Beatriz, and Lin-Manuel Miranda of Hamilton who worked on the songs for the movie.

And finally, with season four of Stranger Things in June of 2022, came a fresh host of 80s songs returning to the charts. This saw Kate Bush’s “Running Up That Hill” trend on every social media platform, as it served as a pivotal track for the season. This led to the song hitting number one on the charts nearly forty years after its release, beating its initial release rank of number three. 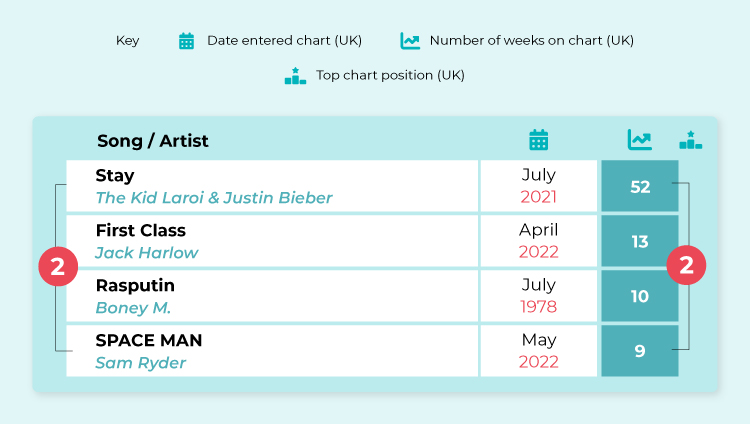 Another four viral TikTok songs got to rank two on the UK Official Charts. “Stay” by The Kid Laroi and Justin Bieber was trending on TikTok almost as soon as the song was released. TikTok user @maxtaylorlifts posted the earliest video on the 26th of July 2021 and Bella Poarch made her own dance video to the song, featuring llamas.

Sam Ryder, who was the UK’s choice for Eurovision 2022 and his song “Space Man” got him first place in the jury vote and an overall second place. Ryder already had a sizable TikTok following, where he posts his songs and cover songs, which quickly led to him seeing more commercial success in the form of charting songs and Eurovision performances.

Jack Harlow posted a thirteen-second clip of his then-unreleased song “First Class” on TikTok, on April 1st of 2022 and in under a week, it had been used in 50,000 TikTok videos. Since its full release on April 8th, it has now been used in over one million TikTok videos and made it to number two on the UK charts.

And finally, we have a further two viral TikTok songs, this time making it to the third spot on the UK music charts. Doja Cat’s “Kiss Me More” trended specifically with the LGBTQIA+ community with users posting videos using the song, with a dance featuring people flicking their wrists to reclaim the ‘limp wrist’ slur used against gay men, the song was used in more than two million videos on the platform. Lizzo’s song “About Damn Time” was made viral due to a dance video posted on TikTok by Jaeden Gomez. And during the 2022 BET awards, Lizzo herself did a rendition of Gomez’s popular choreography on stage whilst performing the song. 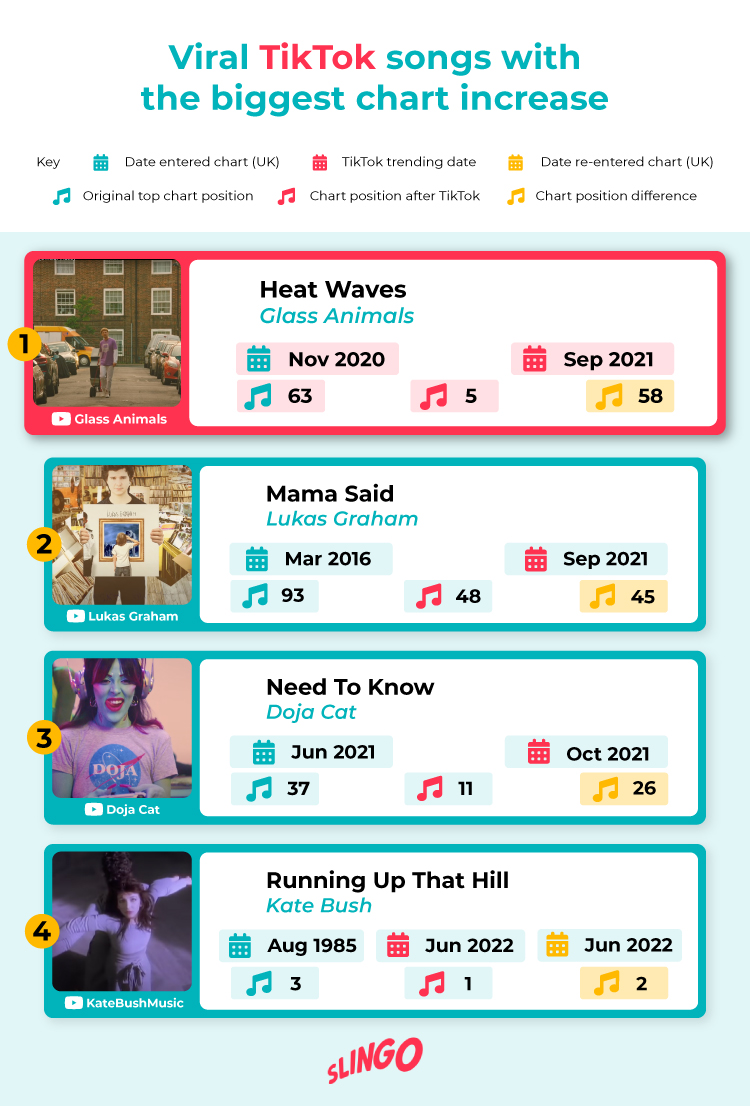 The song with the biggest change in its original chart ranking is “Heat Waves” by Glass Animals, which originally peaked at 63 during its initial release in the charts. However, in 2021 the song was caught up in a trend that saw TikTok turning songs into sea shanties and since then, it re-entered the charts in January of 2021 and hasn’t left since, peaking at 5th and enjoying its 79th week in the charts.

This particular song was released in 2014 and didn’t chart until March of 2016, almost two years after its release. However, in this instance, it’s not likely to be attributed to TikTok success. 2016 was the year Lukas Graham performed at the Summertime Ball and saw his song “7 Years” top the UK charts, kickstarting his career. However, in 2021 “Mama Said” went viral on TikTok in a trend where users posted videos of things they do or used to and were frowned upon, to the song's lyrics: “When mama said that it was okay”.

Initially, upon release, this song entered the charts at a peak position of 37 and only stayed in the top 100 for two weeks. However, during the Austin City Limits festival in October 2021, Doja Cat performed “Need To Know” and gave a wink during the performance, leading to a clip of it being posted all over TikTok. This led to the song finishing out the year with a further 17 weeks on the charts, peaking at 11th, for a total increase of 26 on her original peak with this song.

4. Running Up That Hill - Kate Bush

Stranger Things season four featured the character Max Mayfield (or “Mad Max”) listening to this 80s song through her Sony Walkman and it has reignited the popularity of the song. In 1985, when the song was released, it peaked third on the UK charts. With this revamp from Stranger Things, the classic Kate Bush song rose to number one in the UK charts by the end of June, after part one of the season dropped on Netflix. Astonishing that a song can be capable of such, nearly 40 years following its initial release.

Using various lists, such as Pop Buzz, Radio X and Mashable as well as songs from TikTok’s top 50 music chart, we compiled a list of the highest trending songs on TikTok from 2021-2022.

We then used the UK Official Music Chart to search for each song, cutting those that did not chart in the UK, and noting down each song’s peak position. If the song had a previous run in the charts we took its original peak position, how many weeks it had been in the charts and when it first entered the charts.

We then used Wikipedia in order to get the songs’ release dates and their genre. And then we tried to ascertain specifically when the song started trending, where possible.

Finally, we searched each of the remaining songs on TikTok’s sounds search to see how many videos they had featured in as of 12/07/2022.

You may wonder, which of the celebrity families earn the most, and has the largest social media following and businesses? We got the answers here at Slingo.