Many people are fascinated with the love lives of their favourite celebrities, and this obsession can multiply when celebrities date each other. From Kourtney Kardashian and Travis Barker to David and Victoria Beckham, these power couples all have one thing in common - fame.

Here at Slingo, we wanted to find the most influential celeb power couples today, so we looked at some of the biggest famous couples’ estimated earnings and Instagram engagement rates.

The most influential power couples 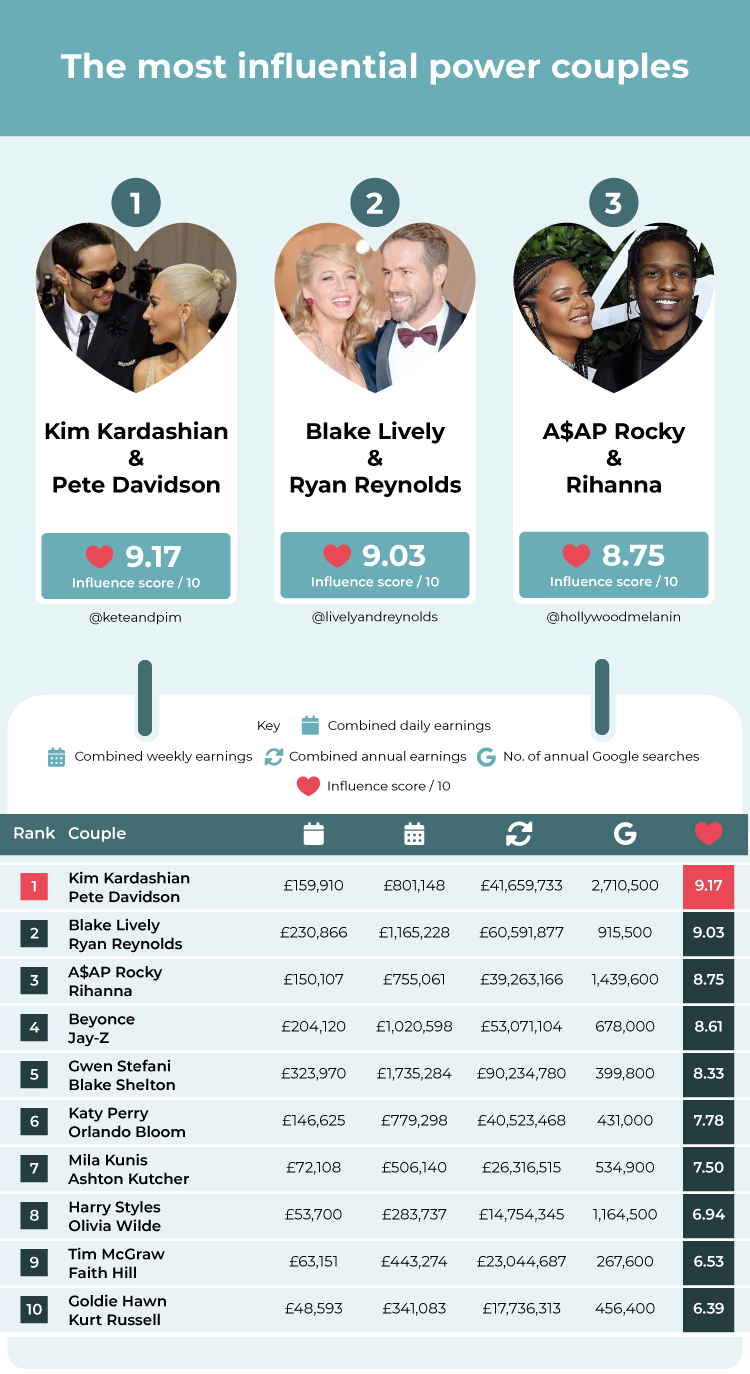 Kim Kardashian and Pete Davidson are one of the newest celebrity pairings on our list, following the split between Kardashian and Kanye West in 2021. Despite this, the couple is the most influential power couple in the world, ranking in the first place.

Proving their influence as a power couple, the pair received 2,710,500 Google searches in the last 12 months and Kim’s Instagram engagement rate is 0.85%.

Since Blake Lively and Ryan Reynolds met on the set of the movie Green Lantern in 2010 their romance hasn’t slowed down. Hollywood’s favourite power couple ranks in second place as the most influential celebrity couple today. With a combined annual salary of £60, 591,877 Blake Lively and Ryan Reynolds are in the top five highest earning power couples on our list. The couple make an estimated £1,165,228 every week, and £230,866 each day, making them one of the top earners we looked at.

With undeniable popularity, Lively and Reynolds received 915,500 Google searches in the last 12 months. Blake Lively boasts an impressive 5.79% engagement rate on Instagram, while Ryan Reynolds’ is 2.28%.

A$AP Rocky and Rihanna have been friends since 2013 and announced their relationship around 2020. The couple sealed the deal by welcoming their first child in May this year, and are one of the most influential on our list, ranking in third place.

There were 1,439,600 Google searches in the last 12 months for A$AP Rocky and Rihanna - that’s more than any other power couple on our list except Kim Kardashian and Pete Davidson. Their influence on Instagram is equally high, with A$AP Rocky’s engagement rate at 5.89% and Rihanna’s at 3.4%.

*Out of the 37 most famous power couples we chose to include in this study, the following couples ranked as the least influential on our list.

Zoe Sugg and Alfie Deyes were once the hottest couple online after making their relationship official in 2013. The YouTube stars are now one of the least influential power couples we looked at.

The couple received 5,290 Google searches in the last year, ranking in the bottom five on our list for this factor. Zoe’s Instagram engagement rate is around 1.46%, while Alife’s is 1.76%.

Footballer Alex Oxlade-Chamberlain and singer Perrie Edwards are one of the least influential power couples on our list. Since announcing their relationship in 2017 the couple have cemented their status as one of the UK’s favourite power couples.

We sourced the daily, weekly and annual earnings for each celebrity from WageIndicator, and where unavailable, from CelebWorth on 20th July 2022.

We used Google Keyword Planner to find the total number of worldwide Google searches for each couple in the last 12 months.

Looking at daily, weekly and annual combined earnings and Google searches, we gave each factor a normalised score out of 10. We then took an average of the scores across all factors to give an ‘Influential score out of 10’.

We sourced each celebrity’s Instagram engagement rate from SocialBlade on 20th July 2022.

While some celebrity couples rank lower than others on our list, we selected only the most talked-about couples of 2022.