Here at Slingo we’re big fans of sophisticated slot game Da Vinci Diamonds, so when we got the opportunity to create a Slingo version of the game we jumped at the chance!

In this marvellous mash-up you’ll complete Slingos on the familiar 5x5 grid to work your way up the pay ladder towards the Da Vinci Diamonds bonus game.

The bonus game is played in the same way as the original Da Vinci Diamonds slot, where you’ll spin the reels to match up famous artworks and have the chance to win cash prizes!

After your initial spins are up, you can choose to buy extra spins to carry on the fun!

Matching numbers on the grid, Wilds or Super Wilds will trigger a Tumbling Reels feature that replaces them with new numbers or symbols. The reels will continue to tumble as long as a match is achieved, giving you even more opportunities to win!

Complete eight Slingos or more to gain access to the Da Vinci Diamonds bonus round at the end of your game. The bonus game is in the same format as the original Da Vinci Diamonds slot, and you’ll spin the reels to match up symbols and have the chance to win a cash prize. The number of spins you’ll be awarded increases with the number of Slingos you complete.

At the end of the bonus game a multiplier will be applied to any winnings – this multiplier value will also increase with the number of completed Slingos. 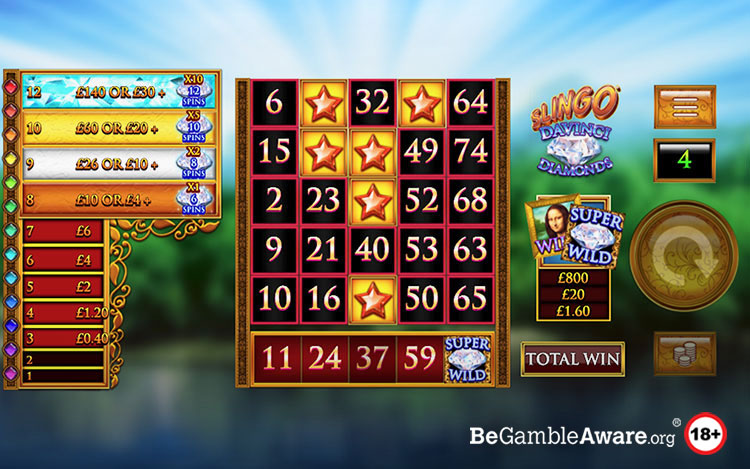 The Slingo Da Vinci Diamonds game has a few features you’ll recognise from other Slingo games, as well as some exciting new additions: 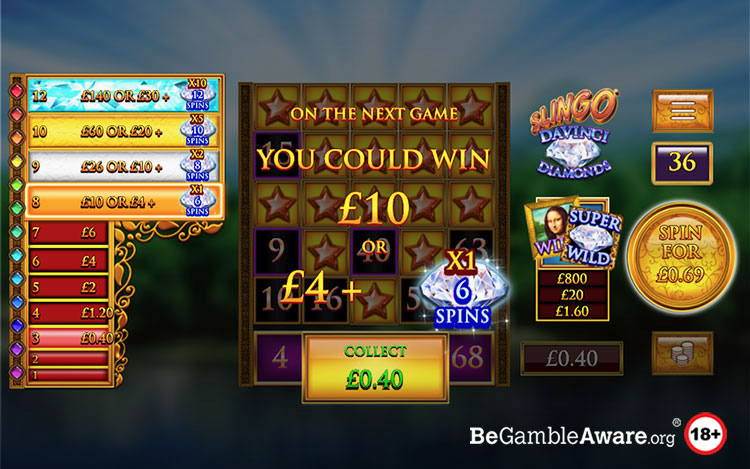 Enjoy a true masterpiece with the Slingo Da Vinci Diamonds game online! And where better to play it than the official Slingo site? With over 1,200 Slingo, slots and casino games plus amazing customer service and a fun gaming environment, Slingo.com is your #1 destination for a fantastic gaming experience. Sign up and play Slingo Da Vinci Diamonds here at Slingo.