Slingo Starburst: One of the Most Played Slingo Games at Slingo

Slingo Starburst has been a fan favourite ever since it was released back in 2021. This hugely popular game blends the best bits of the original Starburst slot with the familiar Slingo grid to create an out-of-this-world gaming experience!

Read on to learn more about Slingo Starburst, including how to play, special features and more. 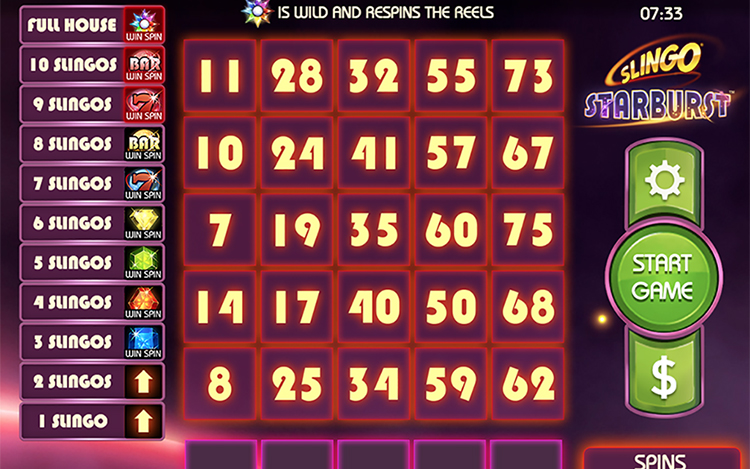 Slingo Starburst exploded onto the gaming scene back in March 2021, and today it’s one of the most played Slingo games ever.

The original Starburst slot is a classic in its own right, with its cosmic theme, expanding Wilds and the chance to win free spins. When our team added their own twist to the game, a (Slingo) star was born!

In Slingo Starburst, the aim of the game is to complete Slingos to activate the Starburst bonus game, with guaranteed Win Spins! 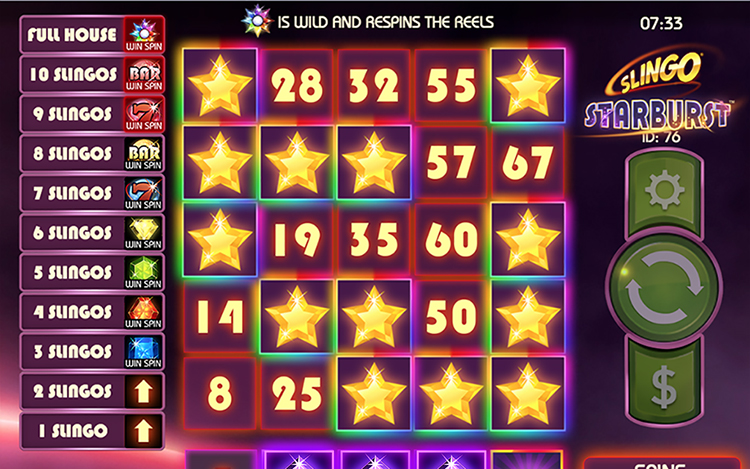 The Slingo Starburst game has a simple, retro design that makes us think of classic arcade games of the 80s. The familiar 5x5 Slingo grid is set on a bright purple backdrop complete with pretty gold stars that move gently across the screen, creating a relaxing gaming experience.

The cosmic theme will be familiar to fans of the original Starburst game, and the collection of precious gems and Starburst symbols are beautifully designed.

Slingo Starburst is fully optimised for both mobile and desktop use, making it suitable for playing whenever and wherever suits you best. 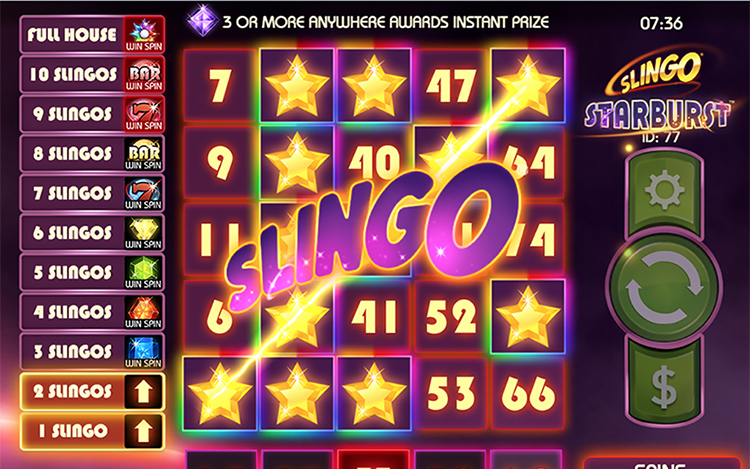 In Slingo Starburst, you have ten spins to match the numbers on the reel with those on the grid. Slingos are completed by marking off five numbers in a row – horizontally, vertically or diagonally.

Wilds and Super Wilds can help you to complete Slingos by allowing you to mark off numbers in the grid. There are also Free Spin symbols that will award you an extra spin at the end of the game, as well as a red X which acts as a blocker to try to stop you from landing wins!

There’s also a purple gem – find at least three on the reels to win an instant cash prize!

Complete three or more Slingos on the grid to trigger one of nine exciting bonus rounds, which are based on the original Starburst slot. The bonuses for each Slingo are shown in the pay ladder. For example, six Slingos triggers a Win Spin with a guaranteed win utilising the yellow gem. The more Slingos you get, the higher the value of the Win Spin symbol.

In the Starburst bonus games, you’ll also come across some symbols on a traditional slot reel.

The most important symbol is the multicoloured Starburst Wild, which will expand to cover an entire reel AND trigger a re-spin when it appears.

Other symbols include the gold BAR logo, the Lucky 7, plus pretty coloured gemstones. Match up symbols during the bonus round for your chance to win a cash prize!

With its fun intergalactic theme, exciting Starburst bonus game and amazing real money prizes, Slingo Starburst is one of our favourite games ever! Play it at Slingo.com for a unique gaming experience in a safe, secure environment that puts you first.

Top Circus-Themed Slots at Slingo in 2022