Slingo Starburst is the Slingo take on the hugely popular Starburst slot game. Although you could be forgiven for thinking that there’s not much difference between them, the truth is that the two games are very different!

In this blog post, we’ll look at each game in detail and explain the differences between the two. Read on to find out more…

In terms of gameplay, Starburst is a slot game and follows a typical slot game format. It has five reels and three rows, and when you hit the spin button the reels spin until they land on a random combination of symbols.

The aim is to land the same symbols on reels that are next to each other on a payline. If you’re lucky enough to land a winning combination, you’ll get the chance to win a cash prize.

One of our favourite features of the Starburst slot game is that its paylines pay both ways. This means that winning combinations can be achieved starting from both the left AND the right side of the reels, whereas most other slot games only allow you to form wins starting from the left.

Wild symbols have the power to expand across entire reels, replacing all other symbols to give you even more chances to win.

On the other hand, Slingo Starburst is a Slingo game and has a similar format to other Slingo games. The game is played on a 5x5 grid with a reel underneath it, and the aim of the game is to match up numbers on the reel with those on the grid to complete lines, or ‘Slingos’.

With each Slingo you complete you’ll move  your way up the ladder on the left of the screen to gain Win Spins in the Starburst bonus game, which is triggered at the end of the game or whenever you hit ‘Collect’.

The Starburst bonus game is based on the original Starburst slot games, and follows a slot game-style format.

How to Play Starburst Slot 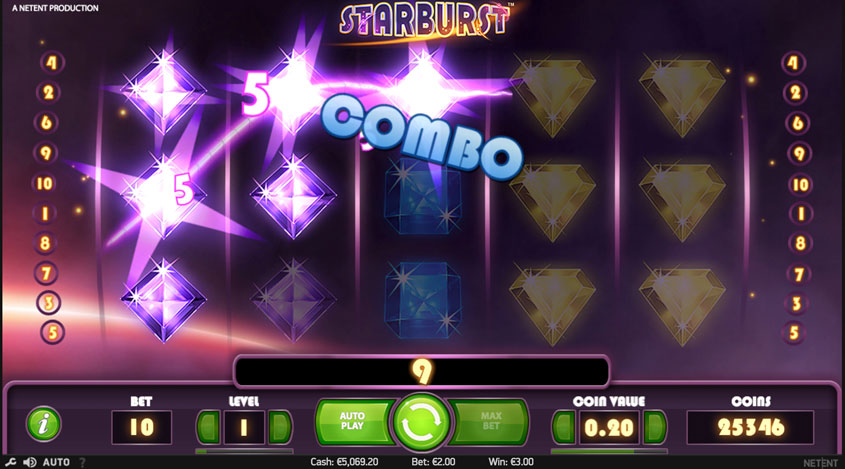 Like all slot games, first you need to decide your stake. Set your bet amount, number of lines and coin size using the left and right arrows on the screen. Once you’ve done that, the fun begins!

Hit SPIN to begin. The aim of the game is to match up symbols on the reels on one of ten paylines. Remember that paylines work both ways on Planet Starburst, so winning symbols can go from left to right or from right to left!

Things really start to get exciting when the Wilds – represented by a stunning rainbow coloured jewel – appear on reels 2, 3 and 4. This gemstone has the power to expand across the whole reel, replacing all other symbols and remaining there while the other reels spin again.

If another Wild appears during the re-spin, it will expand and remain just like the first one, giving you another round of free spins.

Landing blocks of symbols, for example nine symbols in a triangle from the top or bottom corners, can also win you real money prizes.

How to Play Slingo Starburst 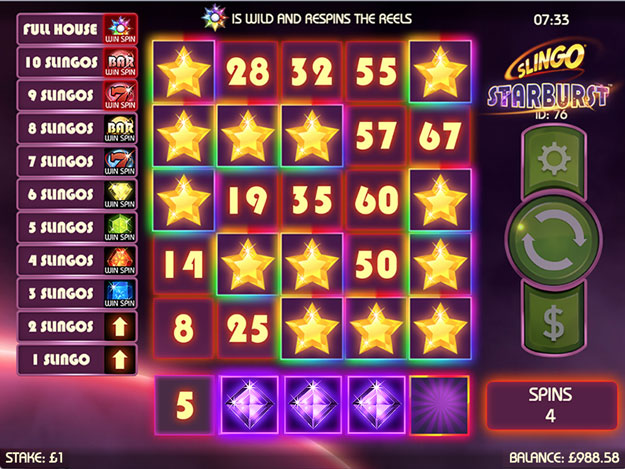 Before playing Slingo Starburst you’ll need to decide on your stake. Adjust it by clicking the dollar sign to the right of the game screen and choosing your total stake. Once you’re ready to start playing, hit START GAME to begin.

The reels will spin automatically and each game consists of ten spins (not including any free spins or extra spins).

The aim of the game is to match numbers on the reels at the bottom of the screen with those on the grid. You can see the number of spins you have left in the SPINS box.

Slingo Starburst also has an exciting Extra Spins feature which is triggered at the end of each ten-spin game. A bonus wheel will spin and you’ll win one extra spin if you land in the correct segment, with the chance to win up to five extra spins in a row!

Both Starburst and Slingo Starburst have some exciting features to create a great gaming experience. Here’s a quick run-down: 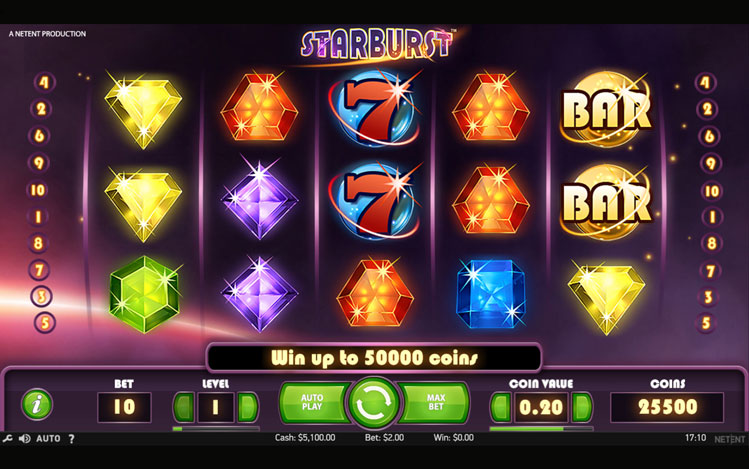 The Starburst Wild is the main attraction in this slot game. It comes in the form of a multicoloured star-shaped symbol, and it can expand across entire reels to give you even more chances to win.

Another great feature of Starburst is Win Both Ways. It means you can get a winning combination from left to right and vice versa. This ups your chances of winning and adds a whole new dimension to the traditional slots format! 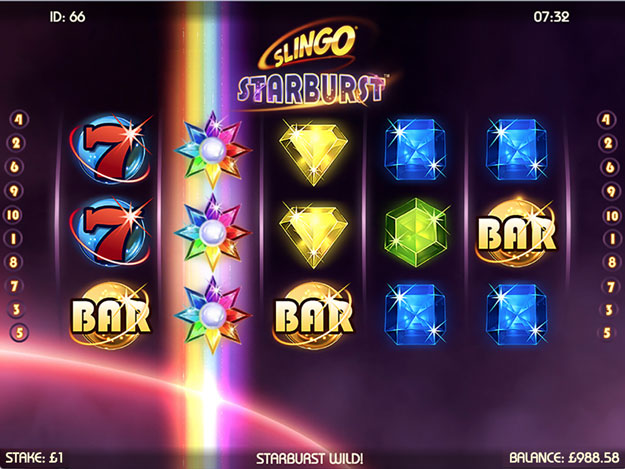 Slingo Starburst has nine different bonus rounds to give you even more chances to win a cash prize. The bonuses are triggered by completing three or more Slingos, and the bonuses for each Slingo are shown in the pay ladder. For example, six Slingos triggers a Win Spin with a guaranteed win utilising the yellow gem. The more Slingos you get, the higher the value of the Win Spin symbol.

Slingo Starburst also has an exciting Extra Spins feature which is triggered at the end of each ten-spin game. A bonus wheel will spin and you’ll win one extra spin if you land in the correct segment, with the chance to win up to five extra spins in a row!

As well as the usual Wild, Super Wild and Free Spin symbols in the Slingo Starburst base game, there are also purple gems. Find three of them anywhere on the reels on the same spin for your chance to win an instant cash prize!

The Starburst and Slingo Starburst games have different RTPs, minimum and maximum bets and more. For more info, check out our summary below: 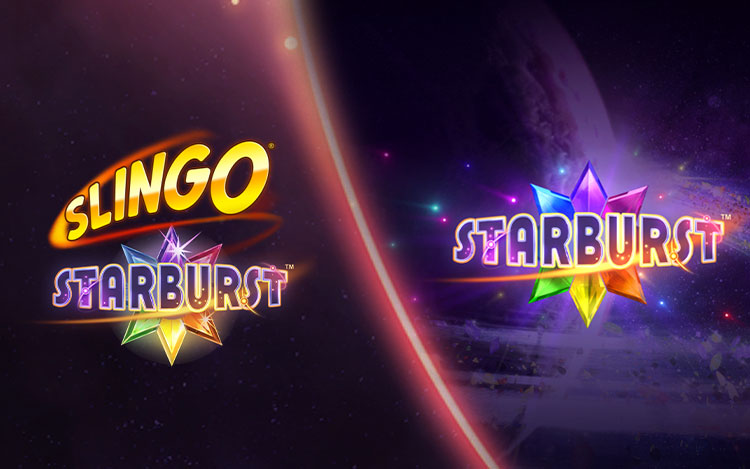 Slingo Starburst and the Starburst slot game share the same cosmic theme that reminds us of arcade-style games from our youth. Both games have an attractive pink and purple design, plus pretty Starburst and gemstone symbols.

The major difference between the two games in terms of graphics is that since the Starburst slot game was released in 2012 and the Slingo Starburst game burst onto the scene in 2021, the latter has slightly sharper and more modern graphics than the original.

Starburst Slot vs. Slingo Starburst: Which Game Is Better?

Unfortunately this question is impossible to answer, since it depends which game you prefer. Both Starburst and Slingo Starburst are distinctive games that have lots to offer, so our advice is to give them both a go!

Play both of these games and many more at Slingo.com, the official home of Slingo plus over 1,200 exciting slot games. Sign up at Slingo today for a fun gaming experience in a safe, secure environment that puts you first. Ready to try something new? Join Slingo now!

Top Slots for Game of Thrones Fans in 2022