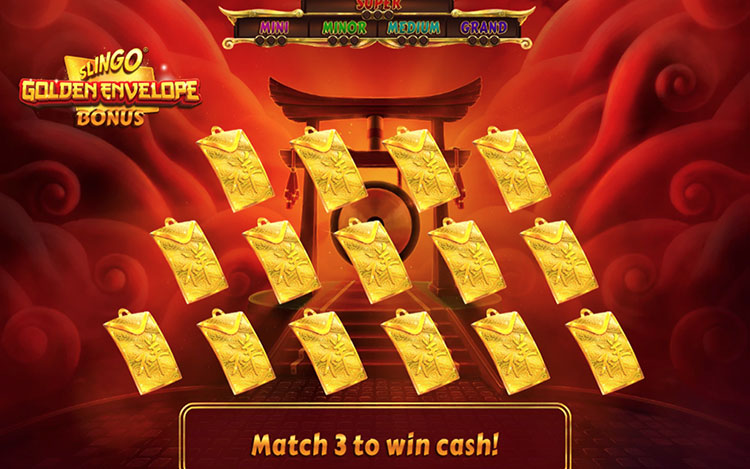 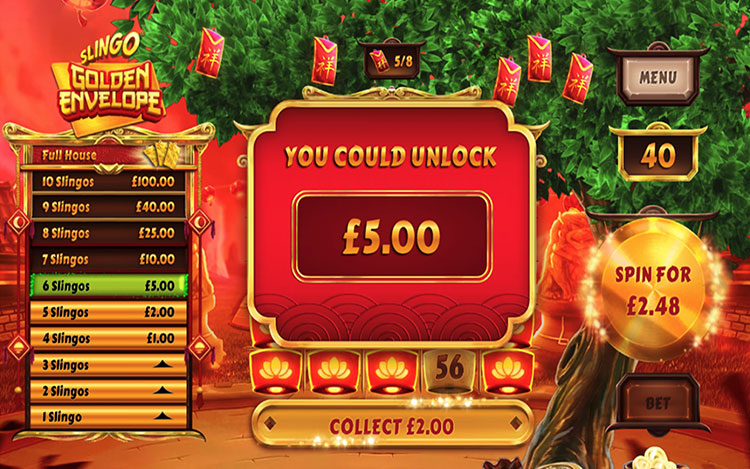 In many Asian cultures, red envelopes are given as gifts to loved ones during the Lunar New Year. These envelopes are filled with money, and the red envelope is an important symbol of luck and prosperity for the year ahead.

In Slingo Golden Envelope, red and gold envelopes have an important part to play. Collect eight red envelopes (from either the reel or the grid) to trigger the Red Envelope feature. You’ll receive a predetermined number of picks, with each red envelope you choose awarding you additional picks, a cash prize or a multiplier.

Complete Slingos to make it to the top of the pay ladder and play the Golden Envelope jackpot bonus game, with five amazing jackpots up for grabs!

How to Play Slingo Golden Envelope at Slingo

Before playing the Slingo Golden Envelope game online, you’ll need to decide on your stake. Once that’s sorted, it’s time to begin!

The aim of the game is to match up numbers on the reel with those on the grid. Completing a Slingo on the grid will move you up the pay ladder, and your goal is to mark off every number on the grid to achieve a full house and unlock the Golden Envelope Jackpot Bonus (more on that soon!).

As you play, collect eight red envelopes (from either the reel or the grid) to trigger the Red Envelope feature. You’ll then get to pick from envelopes on the screen, with prizes including additional picks, cash prizes and multipliers.

Slingo your way to the top of the ladder to play the Golden Envelope Jackpot Bonus. Pick from envelopes on the screen to reveal symbols, with three matching symbols resulting in a cash prize. There are five jackpot levels to play for: Mini, Minor, Medium, Grand and Super!

The Slingo Golden Envelope game is set on a vibrant background, complete with a lush green tree, bags of gold coins and pretty paper lanterns floating in the distance. However, before you start playing there are a few symbols to familiarise yourself with first.

Red envelopes are found on both the reels and the grid. Collect eight or more of them to activate the Red Envelope feature.

Reach the top of the ladder to play the Golden Envelope Jackpot Bonus, where you’ll pick from envelopes on the screen for a chance to win a jackpot prize.

Gold coin symbols act as Wilds, enabling you to mark off any number in the column above it.

The bag of gold coins is a Super Wild, which lets you mark off any number in the entire grid.

There’s also a Free Spin symbol which awards an additional spin at the end of the game, along with a blocker that tries to stop you landing winning combos.

Q: Can I play Slingo Golden Envelope on mobile?
A: Yes, of course! All of our games are fully optimised for mobile use so that you can enjoy your favourite games on the go.