4.0Rating
Slingo X-Scream is a fast, fun and exciting Slingo game with a spooky Halloween theme! Get ready to meet the ghouls in this fang-tastic new game, with pumpkin lantern Jokers to help you win cash prizes. Complete Slingos to work your way up the pay ladder, with a top prize of 500x your bet. With its fun theme, simple gameplay and amazing real money prizes, you’re in for a treat with this unique Slingo game. Ready to brave the graveyard? Play Slingo X-Scream now! 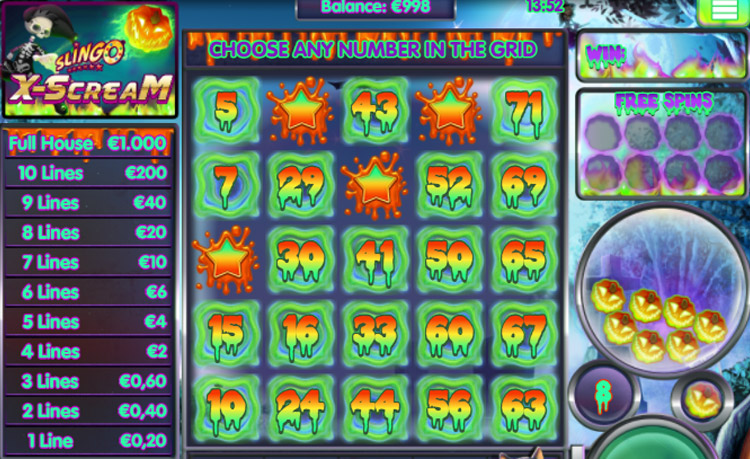 Get your spook on with Slingo’s latest Halloween-inspired game! This time the familiar Slingo grid has been transported to an eerie graveyard at the dead of night, complete with scary skeletons and pumpkin lantern Jokers.

Spin the reels to match up numbers on the familiar Slingo grid, completing Slingos to work your way up the pay ladder. With a bewitching top prize of 500x your bet for a Full House, you could be in for a fang-tastic Halloween treat!

Find three Jokers or Super Jokers (represented by spooky pumpkin lanterns) on the reels on a single spin to win an instant cash prize!

Slingo X-Scream is fully optimised for both desktop and mobile use, meaning you can play whenever and wherever you feel like it.

How to Play Slingo X-Scream Online

Before playing Slingo X-Scream online, you’ll need to decide on your stake. You can use the +/- buttons at the bottom left of the game screen to adjust your bet.

Once that’s sorted, hit the ‘START GAME’ button to begin.

The aim of the game is to match numbers on the reels at the bottom of the screen with those on the grid. You’ll win a Slingo for marking off five numbers on one of 12 win lines. With each Slingo you win, you’ll get one step closer to the top prize of 500x your bet.

Each game lasts for 11 spins, and you’ll have the option to buy up to 8 extra spins at the end of the game.

Cash prizes can also be won by finding one or more coin symbols on the reels.

But watch out for the devil – he’ll act as a blocker to try to stop you landing winning combos!

The Slingo X-Scream game is set in a spooky graveyard at the dead of night. If you’re brave enough to enter you’ll be rewarded with sharp graphics of gravestones, glowing pumpkins and even the odd skeleton. However, before you start playing you’ll need to familiarise yourself with some of the key characters and symbols you’ll meet during the game.

Find three Jokers or Super Jokers on the reels on any one spin to win an instant cash prize!

The devil acts as a blocker to try to stop you landing wins, and the Free Spin symbol awards an additional spin.