4.5Rating
Finn and the Swirly Spin is a fast, fun and exciting slot with a cheerful Irish theme and the chance to win a top prize of 500x your original bet! Meet Finn the friendly leprechaun and spin dynamic spiral reels to win real money prizes. With its cutting-edge graphics, innovative format and rewarding bonus rounds, you’ll love this high-quality slot. Ready to try something new? Play Finn and the Swirly Spin now! 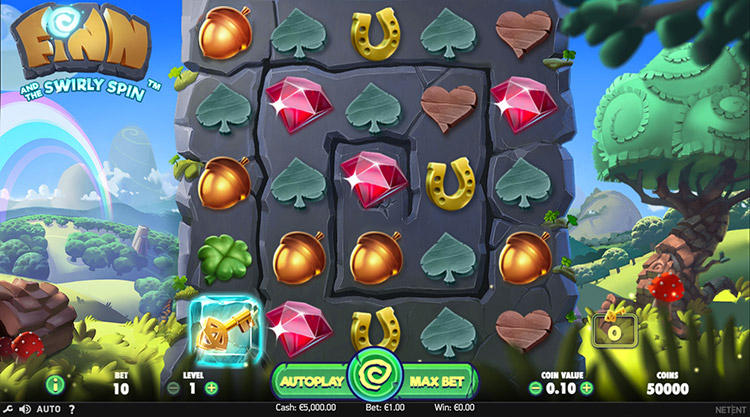 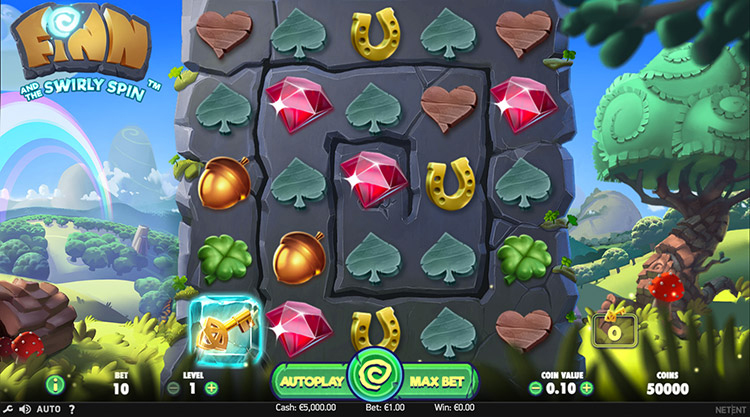 Finn and the Swirly Spin offers us an exciting new way to play for some amazing cash prizes! Instead of the traditional payline format, symbols follow a swirly spiral pattern starting at the outside corner and ending in the centre of the spiral. Simply match at least three symbols (either horizontally or vertically) to be rewarded, and watch as the remaining symbols move towards the centre in an exciting avalanche.

Of course, Finn himself will keep you company by the side of the reels, playing a tune on his recorder and reacting to all the action on the reels.

How to Play Finn and the Swirly Spin Slot Online

Playing Finn and the Swirly Spin online is easy. Like all slot games, first you’ll need to decide on your total bet. Use the buttons at the bottom of the game screen to adjust your bet level and coin value, with your total bet shown below the spin button.

Winning combinations are made by forming clusters of at least three matching symbols on the reels, either horizontally or vertically. Winning symbols will disappear and the remaining symbols will move towards the centre of the spiral in ‘avalanche’ motion.

The Free Spins Key, which starts off at the bottom left of the spiral, will also move towards the centre. Once it gets there, you’ll be transported to a magical Free Spins world and invited to play Star Bar Free Spins, which places random Wilds on the reels to help you win even more prizes!

There are 3 more exciting Free Spins rounds, but you’ll need to collect a certain number of keys to activate each one. The key meter on the right of the screen does not reset each time the game is closed, and players will be able to continue playing with the total number of keys collected when they restart the game.

There’s also a range of fun features that are triggered at random throughout the game to keep you on your toes! The Dragon Destroy feature will eliminate a number of symbols in a fiery explosion and activate an avalanche, while the Magic Transform will change all the spade and heart symbols into higher paying symbols to help maximise your wins.

Finn and the Swirly Spin Characters and Symbols

The Finn and the Swirly Spin game has a colourful cartoon-style theme complete with leafy green trees swaying gently in the breeze and a rainbow visible in the background. However, before you start playing you’ll need to familiarise yourself with some of the key characters and symbols you’ll meet along the way.

The main character is, of course, Finn himself. Although he has no effect on the gameplay itself, he sits at the corner of the screen playing his recorder and reacting to all the action on the reels.

The highest paying symbol on the reels is the pretty pink jewel. It can win you an incredible 500x your original bet for five in a row, horizontally or vertically!

Next is the shiny acorn, which is worth 120x your bet for a cluster of five matching symbols.

Another important symbol to look out for is the Free Spins Key, which appears at the bottom left of the reels at the start of every game. It will progress to the centre as wins occur, and once it gets to the middle you’ll activate the exciting Free Spins round!

The Wild is represented by a cute yellow star and can substitute for all symbols except the Free Spins Key. If the Wild contributes to a win, it will explode and destroy the symbols vertically and horizontally adjacent to it.

Finn and the Swirly Spin FAQs

Finn and the Swirly Spin Slot Game on Slingo