Valley Of The Gods Slot Machine

4.4Rating
The Valley of the Gods slot machine is an ancient Egyptian themed slot created by innovative developers Yggdrasil. This slot gets funky with both the amount of paylines on offer (45 to 3,125), and the configuration of the reels which can change from spin to spin. If you’re not adventurous at heart this may not be the slot for you because the Valley of the Gods slot is played at medium-to-high volatility, but if you can steel your nerves a payout of 500x your stake could be coming your way. 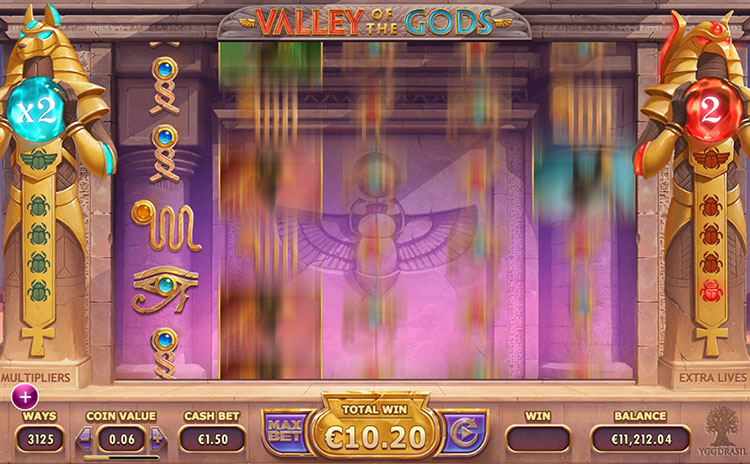 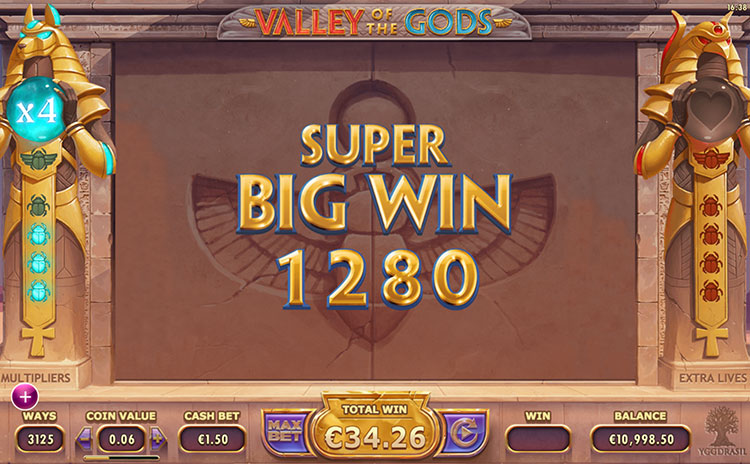 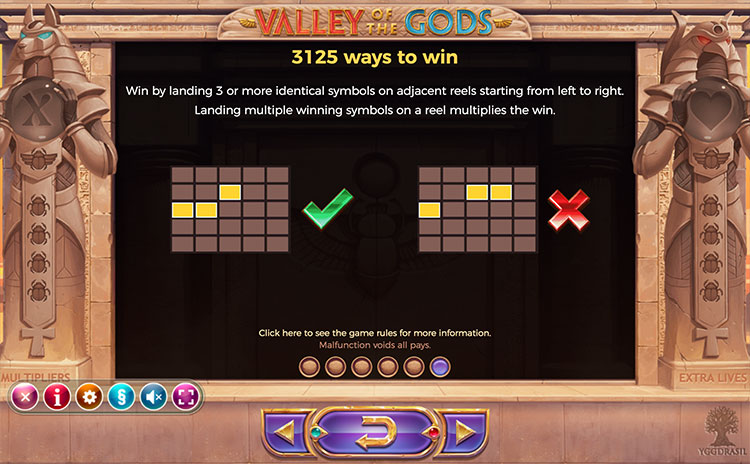 Valley Of The Gods Game Description

Created by up and coming developer Yggdrasil the Valley of the Gods slot game features a unique expanding reel set which jacks up your paylines from a decent 45 to an absolutely epic 3,125 different win ways! With a high to medium volatility this slot packs and punch and isn’t for the faint-hearted. It’s safe to say that the Valley of the Gods slot is a title worthy of the mighty Egyptian gods themselves!

How to Play Valley Of The Gods Slot Online

The Valley of the Gods slot game may have five reels but that is where its similarity with other slots ends thanks to its unique configuration of reels which are in a 1-3-5-3-1 format. The reels have been designed this way so that they have room to expand and offer an impressive maximum amount of paylines of 3,125 (but more on how you can achieve this later).

Outside of its more unique reel set the Valley of the Gods slot is set up like any other. Just set your wager by flicking through the options available and once happy just click (or tap) the spin button and set to work exploring the tombs of the great pharaohs.

As you may have guessed by the title of the slot, the symbols used in the Valley of the Gods slot online are Egyptian inspired. The low-paying symbols are represented by hieroglyphics while the four high-paying symbols are the four main Egyptian gods. The gods will all pay out a maximum of between 250 and 500x your stake amount when landing five on a payline.

Valley Of The Gods Characters and Features

The Valley of the Gods slot machine begins with 45 win ways, which is an impressive amount for any slot. However, each time a player lands a winning combination the reels will expand and more win ways are added. Get lucky enough with the combinations you achieve and after a chain reaction of wins you’ll reach the full expanded reel set which has a jaw-dropping 3,125 different ways to win with each spin.

You may be wondering what happens if you stop landing winning combinations. Well, this depends if you have any lives or not. If you’re out of lives then the reels will decrease back to their original 45 win way form. Of course you’ll want to try to keep the reels fully expanded! Not just because you get that incredible 3,125 different ways to win but there’ll be a 2x multiplier applied too. When the reels are fully expanded players are given a life which will protect them from the reels reducing if they don’t land a winning combination.

When the reels are fully expanded blue and red scarabs will appear on the reels. Collecting five red scarabs gives you an additional life, while 5 blue scarabs will amp up the win multiplier. It’s common for players to end up with a 4 or 5x multiplier during this feature before the lives are used up and the reels reset.

Valley Of The Gods FAQs

Valley Of The Gods Slot Game on Slingo