A Cold Inferno Awaits you with the New Slingo Fire and Ice Game!

What game has both red hot action and super cool gameplay? Why the brand new Slingo Fire and Ice online Slingo game, of course! This new and exciting Slingo game isn't for the faint of heart as it includes two Slingo grids that are played simultaneously and are fiery red and icy blue. Symbols landed on the Slingo reel will either be blue, red, or mixed and will mark off numbers on respective grids. Completing Slingos on the red side of this high volatility slot will award players with better multipliers while Slingos on the blue grid advances up a prize ladder!

How to Play Slingo Fire and Ice 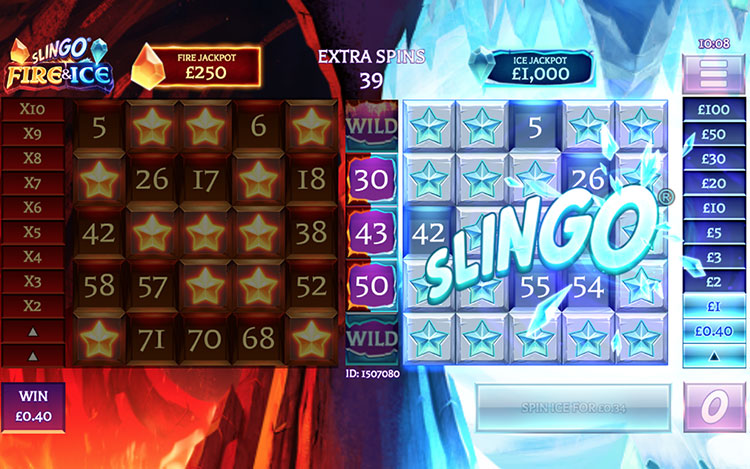 Getting started with the Slingo Fire and Ice Slingo online game is simple and only takes a few clicks, or taps, as this game can be played on all devices. To begin playing you'll need to set your stake amount from the available options. Games of Slingo Fire and Ice can cost a few pence all the way up to pounds so there's a value suited to all budgets. Once you're happy with your bet simply click the spin button to play the game.

Just like other Slingo titles the aim of the Slingo Fire and Ice game is to match the numbers that appear on the reels with the numbers that appear on the game grid. Completing Slingos on the red grid will result in an increased multiplier value while completing Slingos on the blue grid will result in prize values. 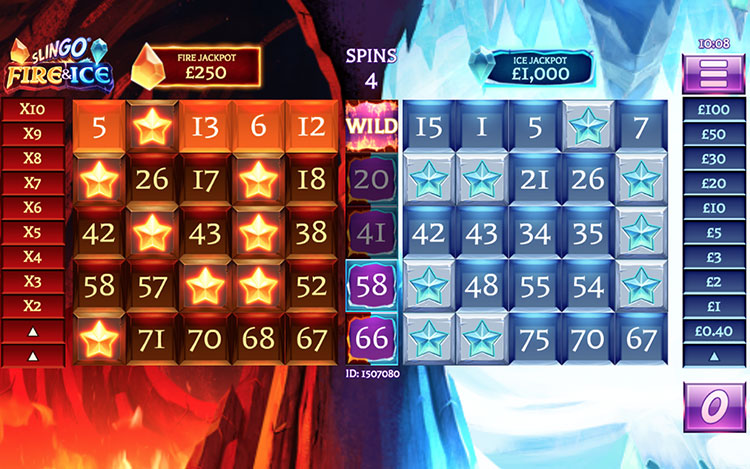 Wilds, Free Spins, and Blockers
These are the three main bonus symbols used in the Slingo Fire and Ice game. Wilds can be red or blue and work with their respective grids, or both colours; in which case they can be used to mark off numbers on either grid. Free spin symbols will award an extra spin to be given at the end of the main spins, while the blocking symbol will prevent you from making matches.

Extra Spins
At the end of the main game extra spins can be purchased. You can choose to spin on the blue grid, the red grid, or both. Each respective spin button will have a price per spin which will change to reflect the current state of play.

Alongside the aforementioned bonus features the Slingo Fire and Ice game also has jackpot values that can be won when a vertical Slingo is completed across both grids. Only gems and blank symbols will appear on the reels when the jackpot feature is active. The blue gem will award the blue jackpot while the red gem will award the red jackpot. Up to five jackpots can be won per game.

Play Slingo Fire and Ice at the Official Slingo Site

If you want to play Slingo Fire and Ice then there’s only one place to do so; at our official Slingo site. Here you can play this fantastic brand new release as well as tonnes of other incredible Slingo titles as well as slots and casino games too! Sign up and play today!