Go on a Wild Adventure with the New Slingo Stampede Game!

Get your sun hat and binoculars at the ready – it’s time to go on safari with Slingo Stampede!

Rhino Scatters are the main attraction in our exciting new Slingo game – find three or more of them on the reels below the grid for your chance to win an instant cash prize.

To add to the excitement, this time there are not one but THREE reels below the grid, giving you even more opportunities to match up numbers and complete Slingos.

Work your way up the pay ladder on the left of the screen by marking off Slingos on the grid, while simultaneously collecting Rhino Scatters to advance up the ladder on the right-hand side!

Wilds and Super Wilds will help you on your quest, and there’s even a Free Spin symbol to award you an additional spin.

If you want the fun to keep going, you can also purchase extra spins at the end of each game!

How to Play Slingo Stampede 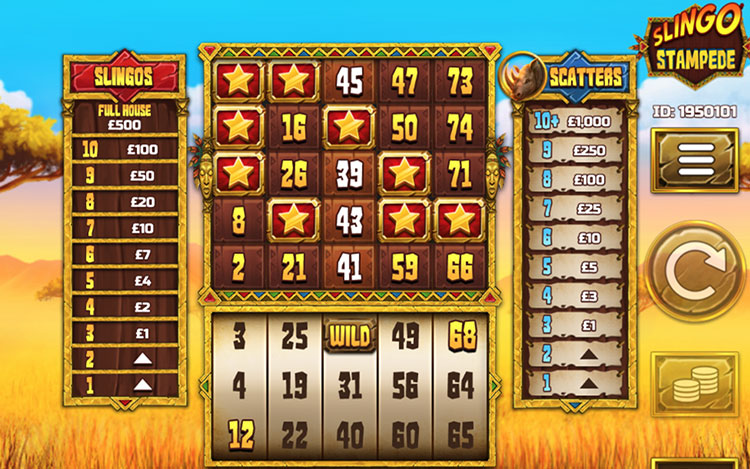 Before playing Slingo Stampede online, you’ll need to decide on your stake. Once that’s sorted, it’s time to begin!

However, this time there are three reels below the grid rather than just one, giving you even more chances to match up numbers.

You’ll also come across Rhino Scatters on the reels. Find three or more of them anywhere on the reels for your chance to win an instant cash prize at the end of the game. If you manage to collect 10 or more Rhino Scatters, you’ll win an amazing 1,000x your bet! 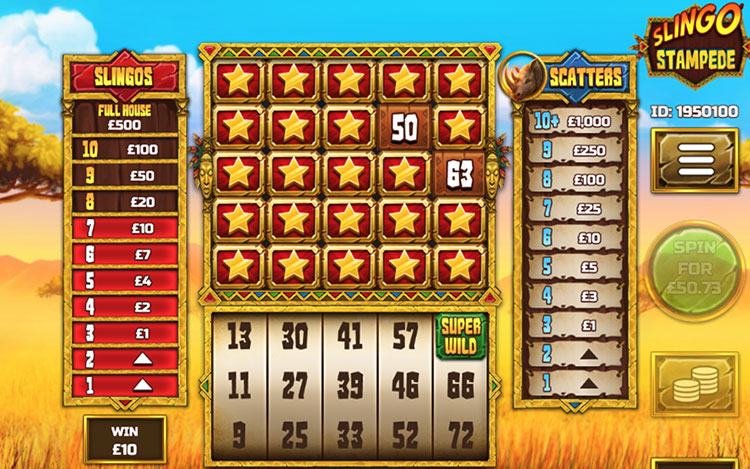 The Slingo Stampede game has a few features you’ll recognise from other Slingo games, as well as some exciting new additions:

Try something new with the Slingo Stampede game online! And where better to play it than the official Slingo site? With over 1,200 Slingo, slots and casino games plus amazing customer service and a fun gaming environment, Slingo.com is your #1 destination for a fantastic gaming experience. Sign up and play Slingo Stampede here at Slingo.

Why is Slingo Rainbow Riches so Popular?