Since it burst onto the online gaming scene back in 2020, Monopoly Slingo has proved to be one of the most popular Slingo games yet.

With its fun, fast-paced gameplay and exciting bonus features – including Chance and Community Chest cards – this unique Slingo game has plenty to offer.

Read on to find out the top five reasons why Monopoly Slingo is so popular, from its fun theme to its varying volatility options.

Monopoly Slingo is a mash-up of two hugely popular games: Monopoly and Slingo! As you might expect, the game takes all the best bits from both games to bring you an exciting new gaming experience.

All the action takes place on the familiar 5x5 Slingo grid, although this time property cards are used to fill the grid. Roll the dice to move around the Monopoly board around the edge of the grid, landing on properties to mark off positions on the grid!

With Chance and Community Chest cards, a Bonus Property and extra cash for passing “Go”, this fun Slingo game brings Monopoly to life! 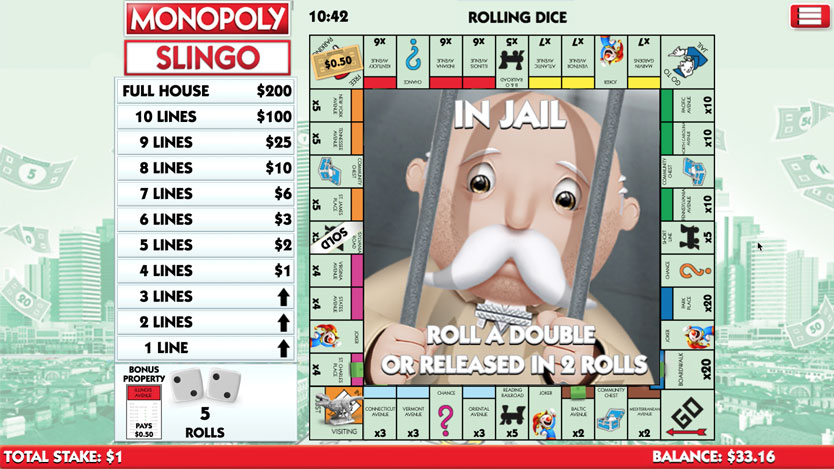 One of the standout features of Monopoly Slingo has to be its beautifully designed theme. The game takes the traditional Monopoly board that we all know and love and gives it a Slingo makeover!

The grid is made up of property cards, and the aim of the game is to turn over all the cards by landing on the corresponding square on the board.

At the four corners of the board you’ll find Go, Free Parking, Go to Jail, and Jail squares, just like in the original board game.

The famous Mr Monopoly himself even appears at the beginning of the game, as well as during the Joker bonus feature.

Although Monopoly Slingo looks a little different to other Slingo games, it’s easy to get to grips with once you’re familiar with the different symbols.

The original silver playing pieces are also used to move around the board, and the properties on the board represent the same London streets as the traditional version. Will you be lucky enough to land on luxurious Park Lane, or will you end up on less-than-glamourous Old Kent Road?

Whatever you do, just make sure you don’t end up in jail – unless you’ve got a Get Out of Jail Free card, that is!

Monopoly Slingo also features the traditional Chance and Community Chest cards, which might shower you with rewards or punish you with penalties – it all depends on the luck of the draw.

And to add a little of that Slingo flavour, you’ll also find some Jokers on the board. When you land on this symbol you’ll be taken to a new bonus screen. One card from each property set will be placed face-down, and the game will automatically select a card for you.

You’ll then advance to whichever property he has chosen, which may help you to complete a Slingo!

Another reason that players love Monopoly Slingo is the freedom to determine the volatility of the game. If you’re not sure what that means, just remember that the higher the volatility the greater the potential prize - but the chance of winning it is lower.

By giving players the chance to decide on the volatility of their game, Monopoly Slingo appeals to all kinds of players - both beginners and those who have more experience. 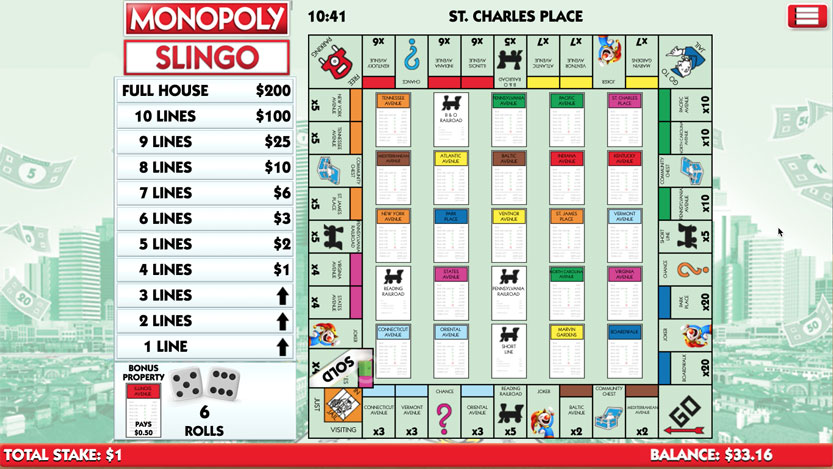 When the Slingo Joker appears, Mr Monopoly will select a card from each property set. You’ll then advance to whichever property he has chosen.

When you land on a Chance card or a Community Chest you will be rewarded. You can get Free Rolls, cash prizes, a “Get Out of Jail Free” card, or the chance to move your position on the board (this can include jail!).

Landing on this will send you to jail for three rolls or until you roll a double. Or if you’re lucky enough to have a ‘Get Out of Jail Free’ card, it will automatically set you free!

Rolling a double will reward you with a Free Roll.

On the board, there are 25 property cards. The 26th is dealt with as the “Bonus Property”. If you land on the Bonus Property (which can be seen at the bottom of the prize ladder) you win an instant cash prize!

Last but not least, one of the main reasons for Monopoly Slingo’s popularity is because it gives the traditional Monopoly board game a whole new dimension.

With its fun bonus features, simple gameplay and the ability to enjoy Monopoly on the go, Monopoly Slingo brings everyone’s favourite game into the 21st century.

Not to mention that the Monopoly Slingo game is much faster-paced than the original, and offers the chance to win real money prizes!

Advance to Go with Monopoly Slingo at Slingo.com! Join us today at the official home of Slingo, where you can play every Slingo online game plus over 1,200 slot and casino games. Want an amazing gaming experience in a safe, secure environment that puts you first? Sign up today at Slingo.com.

8 Halloween Slots with the Highest RTP