While golden tickets may have different meanings for different people, the ticket you receive in the Golden Ticket online slot is to a brilliant antique circus unlike any other. Play' N Go created the Golden Ticket slot game, which can be played on any device. This low-to-medium volatility slot game is suitable for beginners, casual players, and high rollers wishing to unwind. So, get ready, get ready, the show is about to start, so grab your seats!

A trip to the circus can be a feast for the senses, and the Golden Ticket slot is no exception, looking and sounding fantastic. Both the sound and the imagery have a retro feel to them.

While you spin, a traditional barrel organ-style soundtrack will play in the background.

It creates a lot of mood with the audience's conversation and general commotion. The 5x5 reel grid is loaded with circus emblems, with booths, tents, and caravans in the background. Strongmen in leotards, clowns, top hats, dumbbells, and juggling clubs are among them. A sad-faced clown, strongman, and ringmaster is in charge of the action.

The Ringmaster is the highest paying standard symbol, paying 0.5, 2.5, or 25 times your total stake when three, four, or five of them appear in a row. You'll win 50 times your bet if you can clean the entire grid. The wild symbol is the Golden Ticket, which can replace all other symbols save the Bonus re-trigger symbol. More crucially, 3, 4, or 5 in a row will pay 5, 15, or 500 times your total stake, respectively.

The Basics: How to Play Golden Ticket Online Slot 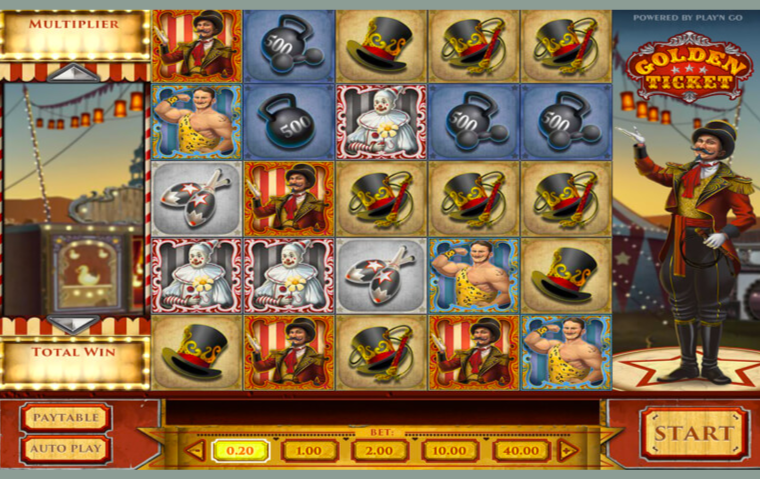 Prepare for a journey to the circus because the Golden Ticket slot machine will greet you with a carnival of sights and noises, all with a retro, almost 'freak show' vibe. Of course, because this slot was produced by Play' N Go, you can be assured that it is compatible with all platforms, including mobile phones and tablets, via the mobile slot, and desktop computers too, allowing you to play from home or on the go. To begin configuring your bet, use the panel below the reels to select your coin size. Simply type in the amount you want to bet per spin and you're ready to start. When you're satisfied with your wager, press the spin button to start the reels spinning. 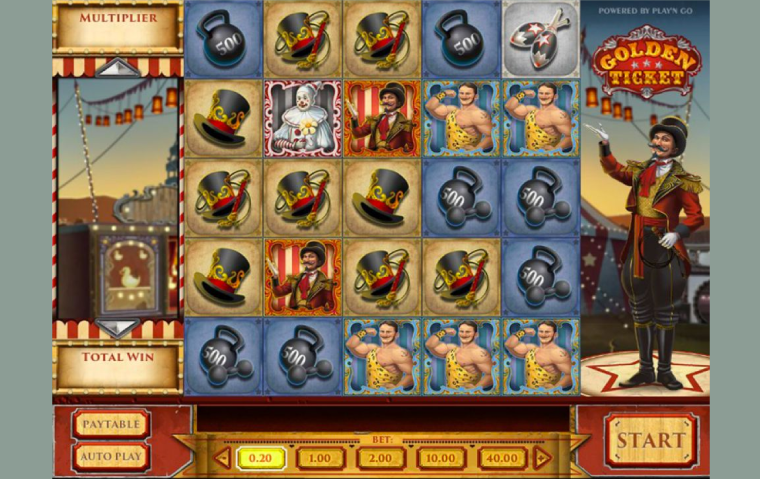 There is no traditional free spins bonus round feature used in the Golden Ticket slot. However, there are some great bonus features which are as follows:

The cascading reels feature, often known as tumbling symbols or avalanching reels, increases the Golden Ticket slot's earning potential. When a player lands a winning combination in this slot, the winning combination is eliminated from the reels and fresh symbols cascade down to take its place. This can result in a whole new set of symbol wins, and the cascading symbol process can continue indefinitely, with each of your symbol wins adding up.

That's not all; there will be a wild sign in the middle of the new symbols, which can truly assist you to complete new combinations. Furthermore, each successful combination you land increases the win multiplier by one, with the multiplier reverting to 1x once no more winning combinations are formed.

The letters that make up the word 'BONUS' can be found behind the reels. If you're lucky, you might be able to reveal all of the letters in this word, triggering the bonus feature.

Players are transported to a brand-new screen that resembles a traditional carnival shooting gallery. Players will be offered 10 shots (which act as free spins) at a variety of targets, including drums, ducks, balloons, targets, stars, cakes, elephants, clowns, and lions, among others. This feature's goal is for you to land 5 or more matching symbols. The clown is the best symbol to complete because it pays 175 times your bet for a total of 10. This function can also be retriggered for a total of 20 shots.

If you want to take a trip to the circus then come and play the Golden Ticket slot machine at Slingo.com. Sign up and play today.