In the slot from Push Gaming, explore the fascinating realm of The Shadow Order! Find intriguing characters with specific skills, activate cascades to land wins after wins on any spin, and charge up mysterious Orbs to unlock bonus features.

A grid of five reels and five rows is used in the special slot machine known as The Shadow Order. It centres around the titular order and features four enigmatic characters, each of which has a unique gaming ability.

When you play, you have the chance to unlock new characters, land Wilds, charge potent Orbs, use the Cascade function to chain victories together, start the Free Games feature, and land strong Orbs. As you can see, The Shadow Order is a mobile slot with a tonne to offer!

A variety of secretive symbols are used in The Shadow Order slot UK. The Book is worth up to 80x your wager, followed by the Gold Compass, which may pay out up to 120x. Up to 60x can be won with the Glowing Cylinder symbol.

The chess pieces known as the King, Rook, and Knight can pay up to 10x, 8x, and 6x your wager, respectively.  The King pays up to 1.50x, and the Ace is worth up to 2x. Finally, the Queen can pay out up to 1x your wager. There are several Wilds to locate which are used in some of the Shadow Order online slot’s bonus features.

The Basics: How to Play The Shadow Order Online Slot 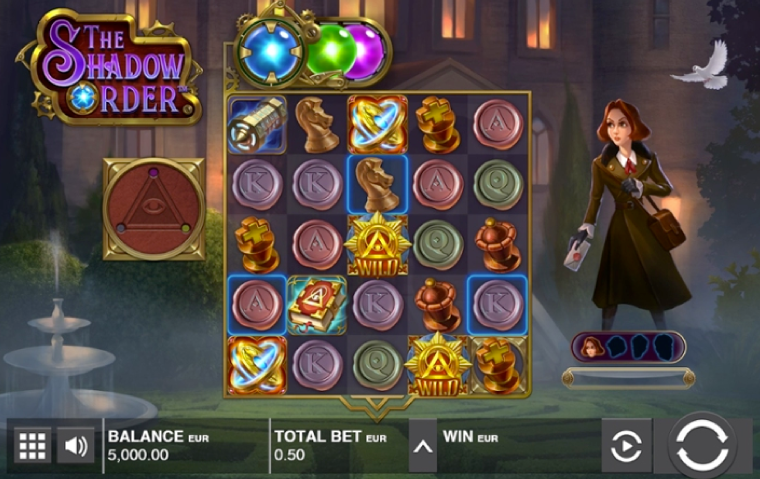 To play The Shadow Order casino slot, use the "spin" button. All of the symbols on the reels will disappear when you press the "spin" button, and fresh ones will drop down to take their place from above.

Three or more matching symbols must be in a winning combination in order for them to be eliminated. There will be a flood of new players to take the vacant spots and possibly create another victorious lineup. The cascade feature allows you to potentially win more than once every spin. The Orb symbols will also be charged by cascades.

Press the "up" arrow next to the "total bet" metre to access the bet menu if you wish to adjust your stake in between spins. To use one of the stake options for your subsequent spin, simply click on it.

The Wild symbol in The Shadow Order slot game pays out 5x, 50x, or 300x your wager for three, four, or five of a kind, respectively. In addition to the Orbs, it can also replace other symbols.

When they are fully charged, the three Orb symbols above the reels will start to spin. Any Orb symbols that land on the grid will act as Wilds, and if one of them lands in one of the three Hotspots, the feature associated with that Orb will be activated once no more cascades may result in a win.

Low-paying symbols will be removed from the reels by the blue Orb of Destruction, making room for fresh ones to drop in. Three to six Wilds will be added at random positions by the Orb of Creation (green). The highest-paying symbol will remain on the reels when the Orb of Preservation (purple) appears, while the rest will be eliminated (apart from Orbs). When no additional symbols that match the locked one fall onto the reels, cascades stop.

To access the second, third, and fourth characters, collect Ring symbols. Rings display a common symbol underneath them and partially fill the character metre.

At the conclusion of a chain of cascades, a Character feature might randomly activate. These characteristics are:

When all three Orb symbols are present in the Collection Tile, the Free Games feature will be activated. Throughout the feature, the Orbs will be charged and held in place.

Every victory in the feature will have a cumulative multiplier added after an Orb appears in the Collection Tile. If all three Orb symbols land on the Collection Tile during a free spin, you'll be awarded two additional spins, and the Orbs will return to their initial position fully charged.

To play The Shadow Order slot, as well as a whole host of other great games, sign up and play today at Slingo.com.