The Wolf Run slot is a 5-reel, 4-row online slot with 40 fixed paylines developed by IGT. The free spins feature, in which the premium symbols get stacked across all reels, is the game's main element.

Players from all around the world are familiar with this traditional game, which can be found at many Vegas casinos. In recent years, the Wolf Run slot machine has made its way to online slots, where it can be played on a variety of platforms, including mobile devices, (via the mobile slot) for fantastic on-the-go gaming. With a maximum win of x40 000 of your stake, it's no surprise that it's such a popular slot with high payouts. Wolf Run offers a conventional 5x4 layout with a few extra features to keep things interesting.

When you first see the Wolf Run online slot on your screen, you'll realize that the developers have created a true delight for slot fans. The title wolf is silhouetted against an overpowering orange moon on the opening screen, which features a deep blue sky above purple and black lines of horizon. The Wolf Run slot machine, as one of the more established slot games, employs traditional design elements. The images and visuals of the original land-based slot machine are used in this mobile version.

It has a Wolf theme, and the game's cast includes various creatures. When playing the Wolf Run slot online, many players will appreciate the familiar and nostalgic sense of picking up this game, and new players will be introduced to one of the classics.

The Black Wolf, the White Wolf, a Howling Wolf at Full Moon, and the standard playing card values of Ace, King, Queen, Jack, 10, and 9 can all be found on the reels. The sounds are also in keeping with the theme, with a thrilling sound being produced every time you press the Spin button or come across a winning combination.

The Basics: How to Play Wolf Run Online Slot 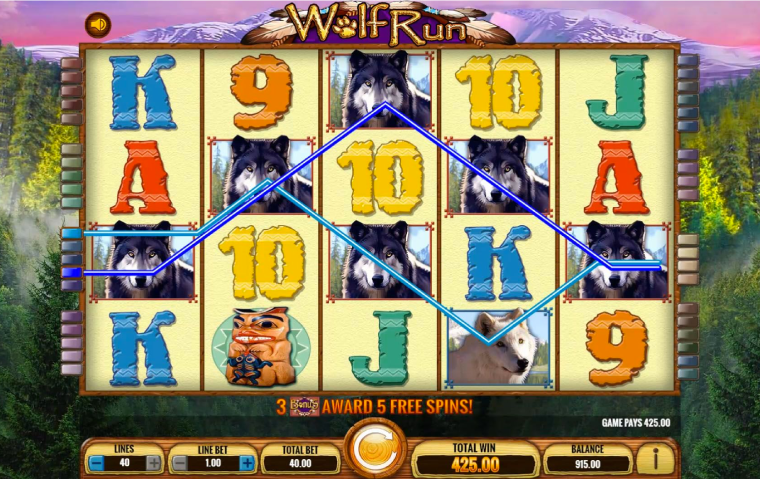 To get started playing the Wolf Run slot UK, load the game at Slingo.com. Before you go running with wolves in the woods, you should choose the betting range to fit your demands. None of the paylines in this slot machine are fixed so to get started you’ll need to use the command "Lines +/-" is used to change the number of lines to the amount you’re looking for. By selecting "Line Stake +/-," you can change the coin size from 1 to 20, resulting in a maximum bet of 800 credits. The reels will begin to spin when you press the "Spin" button. Winning combinations are formed by landing three or more matching symbols across an active pay line starting with the leftmost reel. All payouts will be made in accordance with the paytable.

The Wolf Run slot has a theoretical return to player (RTP) of 94.98% and has a low volatility rating which means that payouts should be pretty consistent, albeit a bit lower in value. Wagers on the Wolf Gold slot game start at 40p per spin but can reach up to £800 for those with higher budgets. 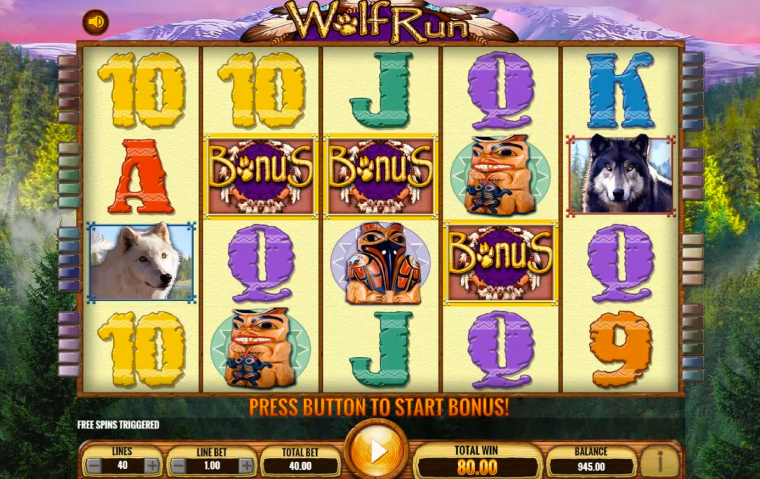 If you get three bonus symbols on reels 2, 3, and 4, you'll get five free spins. These can be re-triggerable up to 255 times, which is astounding yet difficult to come by and it's more likely you’ll retrigger the feature once, maybe twice if you’re lucky.

During the free spins round, though, you can normally receive some good payouts because the payout increases, and the stacked wilds appear frequently.

This bonus feature appears frequently in the main game and much more frequently during the free spins. The howling wolf to the moon represents this loaded wild and can lead to some substantial wins.

If you want to run with the wolves and howl at the moon then play the Wolf Run slot machine at Slingo.com. Here at Slingo, you’ll find a great range of slot machines such as Wolf Run slot game alongside smash-hit Slingo titles, fun bingo games, exciting casino games, and so much more. Sign up and play today to explore a world of online excitement.