Many ardent lovers of the genre hunger for some nostalgic slots action, no matter how many new improvements online slots makers come up with. So, whether you want to experience the 1970s in all its cheesy glory, or if you wish you'd been alive at the time, the Wonder Woman Gold slots game might be just the ticket.

The Wonder Woman Gold slot UK  is a 5-reel, 40-pay line Bally slot machine. It's based on the legendary TV series starring Lynda Carter and is available on all devices. There are five bonus features in total: mystery stacks in the base game, an Expanding Wild feature in both the base game and the Free Game Bonus feature where you can get up to 25 free spins and the Diana Gold symbol replacing up to four low-value symbols, a Buy A Bonus feature where you can buy your way into the free spins feature, and three progressive jackpots.

Superheroes are quite popular right now, which has resulted in a profusion of superhero slot games. When you think of Wonder Woman, you're probably thinking of the 2017 film adaptation starring Gal Gadot as the titular heroine. However, feminism predates the millennium, and Wonder Woman Gold is based on a much earlier iteration of the female superhero - or should that be superheroine? So, if you were alive in the 1970s, you're probably familiar with the legendary television series starring Lynda Carter as the main character. She's back in the Wonder Woman Gold online slot, filling that legendary costume in the best manner she knows how!

The Basics: How to Play Wonder Woman Gold Online Slot 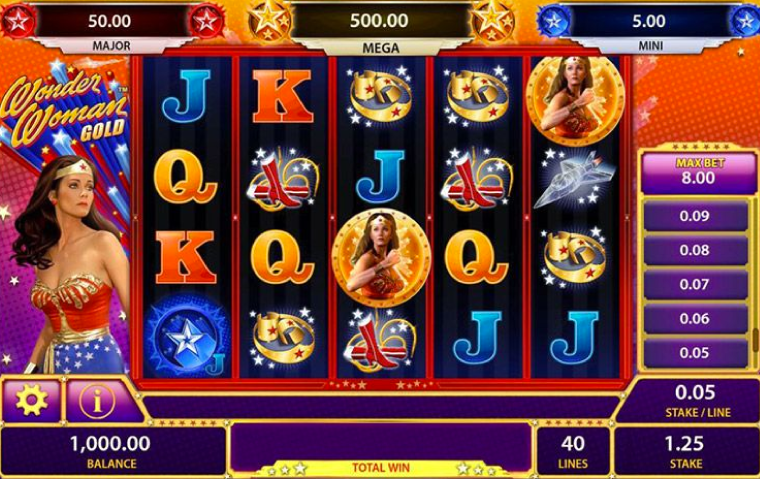 The reels of the Wonder Woman Gold slot are set out in a 5 x 4 grid, delineated by a red frame, and the background is dark, allowing the symbols' colors to shine out to their full potential. The game's controls are located on the right-hand side of the playing area, with a purple space beneath the reels displaying additional game information, such as the player's current balance and wagering amounts, as well as information about the most recent victory. To get started with the Wonder Woman Gold slot machine simply load the game at Slingo.com on any device of your choosing including on the go via the mobile slot. Then set your wager, click spin, and you’re good to go!

The Wonder Woman Gold slot online has a theoretical return to player (RTP) 95.84% which isn’t too far off the current market average. Played at medium volatility, wagers start at 40p per spin up to £200 per spin. 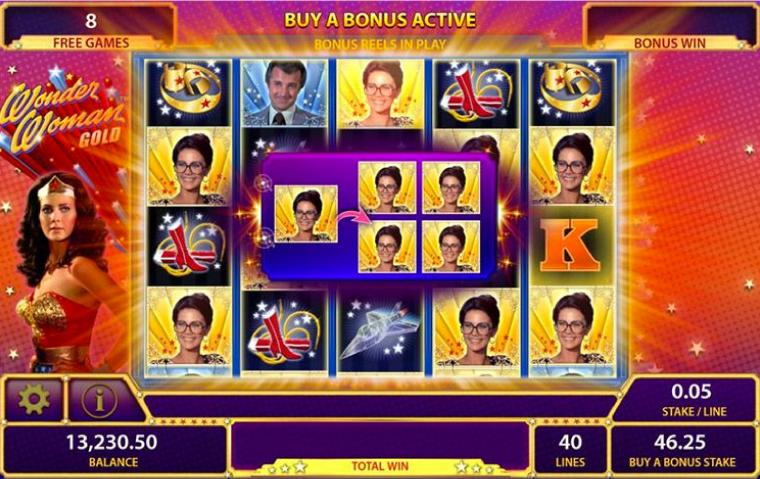 Each spin will select one symbol to be piled across all reels. Each time, it may be a different sign.

Wonder Woman with her Amazonian regalia is the wild symbol, and when she appears on reels 2, 3, or 4, she expands to encompass the entire reel. She has the ability to appear on multiple reels.

The free game feature is triggered when three scatter symbols appear on reels 1, 3, and 5. You can select from the following options:

The free games cannot be re-triggered.

If you prefer, you can pay to engage the free spin rounds by clicking on 'purchase a bonus' (usually over 10x your bet). After that, you can choose from the above-mentioned free game features.

Put your cape on any time you like and play Wonder Woman Gold at Slingo.com. Sign up and play today.