Although Deal or No Deal is no longer on our screens, you can still have your chance in the spotlight by playing online casino games inspired by the hit game show.

Although they share a common theme, the two games are in fact very different!

In this blog post, we’ll look at each game in detail and explain the differences between the two. Read on to find out more…

Deal or No Deal Slot Game

Although the Deal or No Deal slot is technically a slot game, it doesn’t have much in common with traditional slot games. The biggest difference is that there are no reels or paylines.

Instead, the game opens with 26 boxes on the screen — just like in the game show itself. First you’ll pick a box, which will sit on your table in the game. You’ll then continue to pick boxes, and their prize values will be removed from the screen as you play.

At some point the phone will ring, and the banker will make you an offer. You can decide between ‘Deal’ (accepting the offer) or ‘No Deal’, where you continue to choose boxes until you accept a deal, or until there is one box left. In this case you’ll win the corresponding prize, which is in the box you choose at the beginning.

Deal or No Deal Slingo

The grid has a reel underneath it, and the aim of the game is to match up numbers on the reel with those on the grid to complete lines, or ‘Slingos’. When the numbers are matched the boxes are opened and their prize values are removed from the game.

With each Slingo you complete you’ll move your way up the Prize Boost Ladder on the left of the screen, which multiplies the values of all remaining prizes.

Once you’ve completed four Slingos you’ll unlock the Banker’s Offer and be given the option to Deal (take the Banker’s Offer), No Deal (open your box and collect the prize value inside) or Spin (continue the game).

How to Play the Deal or No Deal Slot

Before playing the Deal or No Deal slot game, you’ll need to decide on your stake. Then you’ll choose your lucky box, which will sit on the table at the front.

You’ll then continue to choose boxes, and their values will be removed either from the left or the right of the screen. The lower values are coloured in blue, while the higher values are red.

If you don’t feel like choosing the numbers yourself, you could also use the ‘Quick Pick’ option which makes random selections for you.

The phone will ring at random, and the banker will give you an offer. You can decide to accept it (‘Deal’) in which case the game will end and you will be credited that amount, or reject it (‘No Deal’).

If you choose No Deal, you will keep picking boxes. This continues until you accept the Banker’s Offer, or until you reach the final box — which is the mystery one you chose at the start.

If you get to this point without accepting the Banker’s Offer, the mystery box will open and you’ll win the value inside it.

How to Play Deal or No Deal Slingo 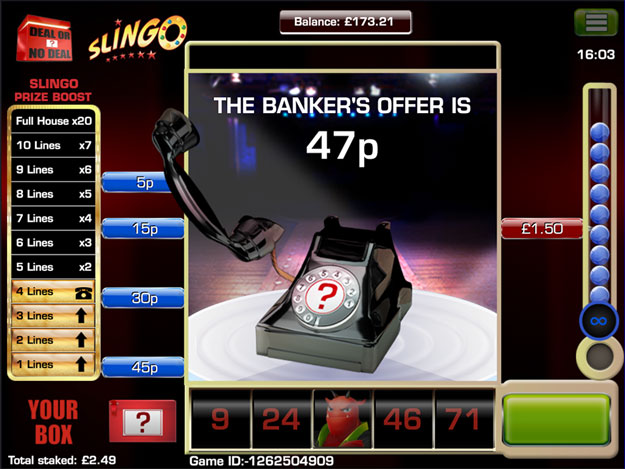 Before playing Deal or No Deal Slingo, you’ll need to decide on your stake. Once that’s sorted, pick your lucky box from the 26 presented to you. Your box will be put aside while the other 25 boxes fill the 5x5 grid.

When you’re ready to begin, hit the ‘SPIN’ button. Each of your initial ten spins places five numbers/symbols in the reel below your grid. If any of the numbered boxes in the columns above match the number below it on the reel, that box will be opened and its prize value will be removed from the game.

Five opened boxes next to each other (vertically, horizontally or diagonally) creates a Slingo, and each completed Slingo moves you up a place on the Prize Boost Ladder to the left of your screen.

Once you've completed four Slingos you'll unlock the Banker's Offer and be given three options:

If you choose ‘SPIN’ the Banker will make an offer after each spin based on the prize values left in the game.

If you mark off all possible Slingos and get a Full House you'll jump up to a 20x multiplier!

Deal or No Deal Slot Features

Due to its unique format, the Deal or No Deal slot doesn’t have as many bonus features as some other games. However, we love the suspense of not knowing when the banker will ring to make his offer!

The mystery box at the beginning of the game sets the scene for the rest of the experience - we can’t help wondering what’s inside!

Deal or No Deal Slingo Features 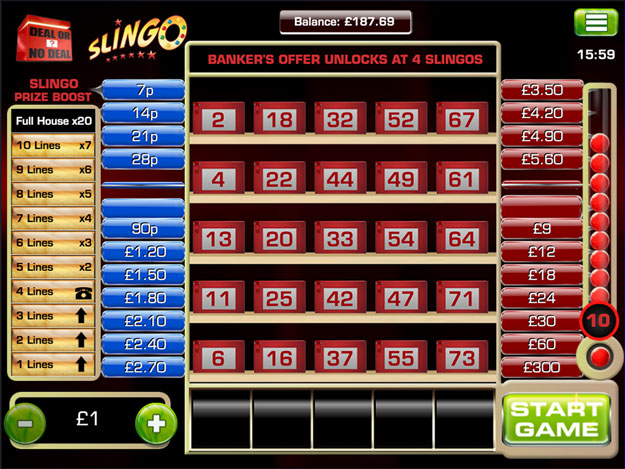 Deal or No Deal Slingo has a few bonus features, but our favourite has to be the banker’s offer. Complete at least four Slingos to unlock this part of the game, then decide whether to accept the offer, open your mystery box or continue to play.

The game also has an Extra Spins option, which enables you to buy potentially unlimited free spins after your initial ten spins are up.

Like many other Slingo games, Deal or No Deal Slingo has a few fun features to hopefully help you win a prize. The Free Spin symbol adds an extra spin at the end of your game, while the Joker and Super Joker can allow you to choose numbers to mark off on the grid. 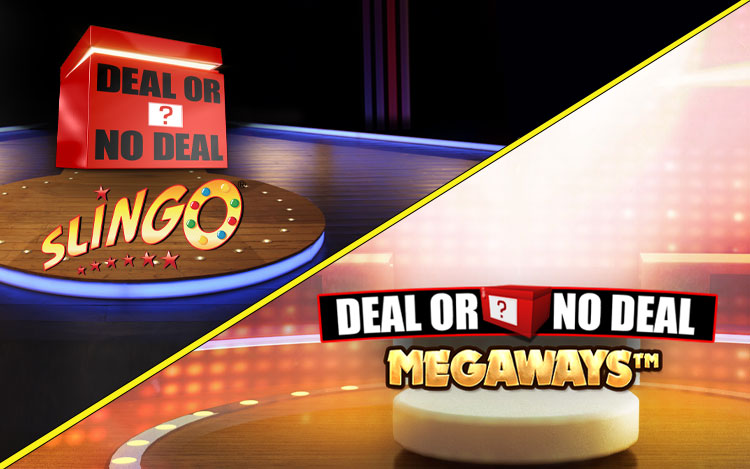 Deal or No Deal Slingo and the Deal or No Deal slot game are both inspired by the infamous TV game show, and as a result they share a similar theme and design. Both feature the famous red boxes on the game screen, as well as blue colours for the lower values on the side of the screen and red for the higher values.

The major difference between the two games in terms of appearance is that in Deal or No Deal Slingo the boxes are used to fill the familiar Slingo grid, whereas in the slot game they are arranged in rows in a 6-7-7-6 format.

Unfortunately we can’t give you an answer to this question, since it depends on your own preferences.

Play both of these games and many more at Slingo.com, the official home of Slingo plus over 1,200 exciting slot games. Sign up at Slingo today for a fun gaming experience in a safe, secure environment that puts you first. Ready to play? Join Slingo now!

8 Halloween Slots with the Highest RTP