How to Play Slingo Berserk: A Complete Guide

How to Play Slingo Berserk

If you’re in the mood for trying an exciting new Slingo game, Slingo Berserk is the one for you! Read our helpful guide to find out everything you need to know about this swashbuckling adventure, from how to play to bonus features and more!

Get ready for an epic adventure on the high seas with Slingo Berserk as you search for hidden treasure in this Viking-themed Slingo Original! Spin the reels to mark numbers off the Slingo grid and lead your brave crew to victory, with Slingos awarded for each win line you complete.

Watch as lightning bolts shoot coins up to the treasure chest at the top of the screen, giving you a chance to activate one of four generous jackpots.

Read on to find out more about how to play this unique Slingo game. 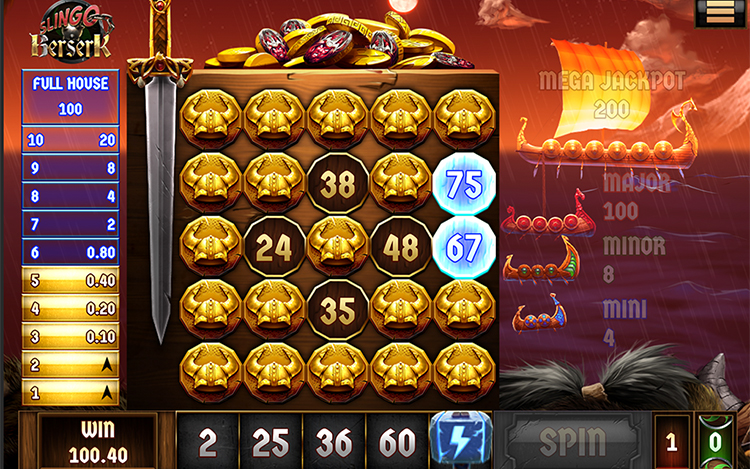 Before playing Slingo Berserk you’ll need to decide on your stake by using the blue bar at the bottom left of the screen. Increase or decrease the amount by using the + and – symbols next to the bar.

Hit ‘Start Game’ to begin. The aim of the game is to match numbers on the reels at the bottom of the screen with those on the grid, and each game lasts for 11 spins. You can see the number of spins you have left in the small red box next to the ‘Spin’ button, and any free spins are shown in the green box.

You’ll win a Slingo for marking off five numbers on one of 12 win lines. With each Slingo you win, the cash prize increases – your progress is shown in the blue ladder to the left of the screen. Win 11 Slingos and you’ll be rewarded with 500x your original stake!

The Lightning Hammer acts as the Wild in Slingo Berserk and can replace any number in the column above to help you score winning combinations. The lightning streak usually blasts a coin up to the treasure chest at the top of the screen, too. However, if you see the coins cascading down to the bottom of the screen it means you’ve activated the Jackpot Bonus round!

How to Win in Slingo Berserk

It’s important to remember that all wins in online Slingo games like Slingo Berserk are random, and cannot be predicted. Outcomes are generated by Random Number Generators (RNGs), which are computer systems that are checked regularly to ensure that they are fair.

However, our top tip for playing Slingo Berserk is to use the Lightning Hammer Wild wisely. When it appears on the reels it enables you to choose a number to mark off on the grid - so choose carefully!

Make the Most out of Slingo Berserk’s Bonus Features 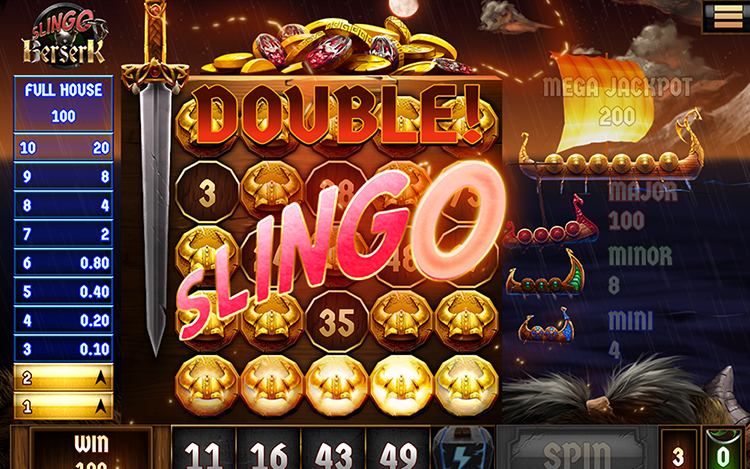 As we discussed in the section above, the Lightning Hammer is a key part of the game as it represents the Wild. When lightning strikes, you’ll be able to mark off any number in the column above. A coin will shoot up to the treasure chest at the top of the screen. However, if the coins cascade DOWN the screen you’ll get the chance to win one of four amazing jackpots!

If you activate the Jackpot Bonus you’ll be shown a different grid of coins. Click a coin to reveal one of four rather angry-looking Viking faces.

Landing three blue Vikings will win you 20x your original bet (Mini Jackpot), and revealing three green Vikings will give you 40x your bet (Minor Jackpot).

There’s also a green wheel which is a free spin symbol, and can add an extra spin at the end of your game.

Extra spins can also be purchased at the end of every game, and the price is dependent on the game position and potential prizes. The price for the next spin will be shown on the purple ‘Spin’ button.

Slingo is the official home of Slingo Originals, including Slingo Berserk! With its epic Viking theme, incredible graphics and not one but FOUR fantastic jackpots, you’ll love this action-packed game. Ready to brave the stormy seas in search of some real cash prizes? Play Slingo Berserk today for an amazing gaming experience!

How to Play Slingo Big Wheel: A Complete Guide

Key Things to Consider in Choosing A Slingo Game